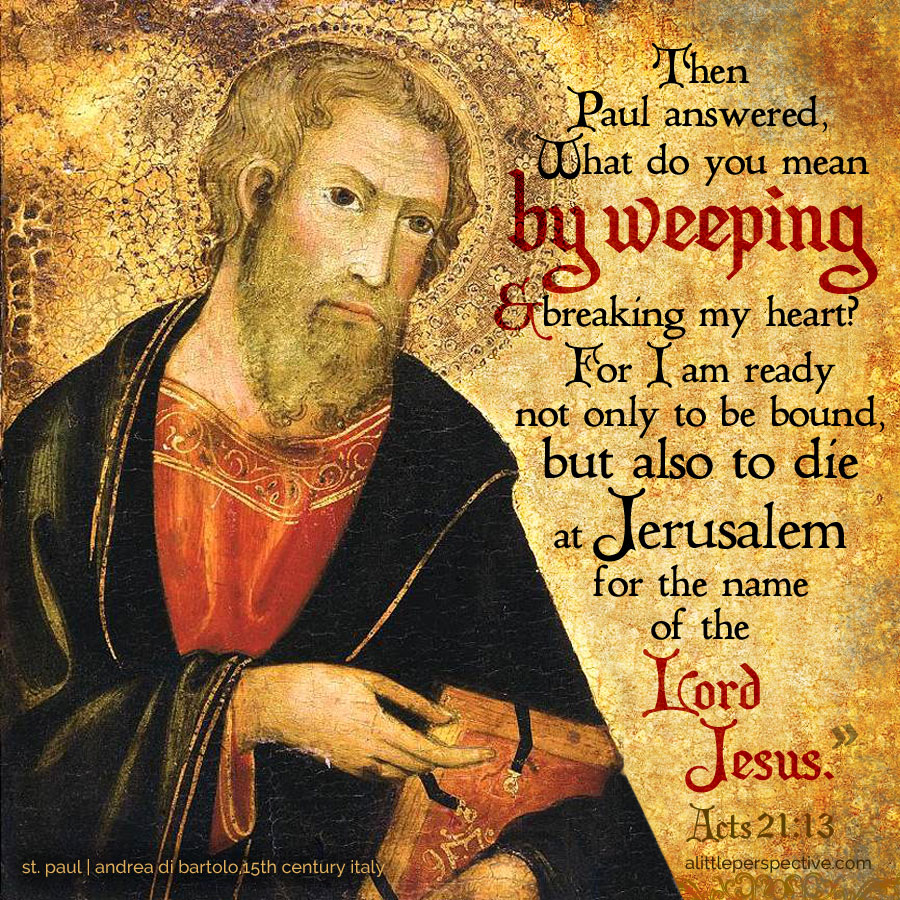 In this chapter, when Paul returns to Judea and Jerusalem from his third missionary journey, the apostles have him undertake a test that sparks the whole powder keg that ends with Paul being arrested and sent to Rome. The passage in question is vs. 17-25.

Now I have heard this passage used to support the concept that Gentiles are exempt from obedience to the Law, and that Jews, even saved Jews, are not. So let’ s do what we always do and see if this harmonizes with the rest of Scripture.

(Remember that it was not only Gentiles who were believing in the Lord Jesus for justification, but Jews as well.)

The Jews in Jerusalem had been told a report about Paul that was not true — that he taught the JEWS among the Gentiles (i.e., outside of Judea and Samaria), to abandon the Law (“forsake Moses”). Now I don’t believe that Paul even taught the GENTILES to forsake Moses. Some examples from his letters to the Gentiles:

“Do we then make void the law through faith? Certainly not! On the contrary, we establish the law.” Rom 3:31

“But now we have been delivered from the law, having died to what we were held by, so that we should serve in the newness of the Spirit and not in the oldness of the letter. What shall we say then? Is the law sin? Certainly not! On the contrary, I would not have known sin except through the law. For I would not have known covetousness unless the law had said, “You shall not covet.” But sin, taking opportunity by the commandment, produced in me all manner of evil desire. For apart from the law sin was dead. I was alive once without the law, but when the commandment came, sin revived and I died. And the commandment, which was to bring life, I found to bring death. For sin, taking occasion by the commandment, deceived me, and by it killed me. Therefore the law is holy, and the commandment holy and just and good. ” Rom 7:6-12

Please remember that the paragraph headers in your Bible are not inspired as the text is! I believe that Paul is saying here, that the Law obeyed from the flesh (the oldness of the letter — when the Law is only inscribed on tablets of stone outside of the heart) produces the fruit of sin and death. But the Law obeyed from the Spirit, by a heart made new by the Spirit, produces the fruit of the Spirit (Gal 5:22-23). The flesh cannot produce the fruit of the Spirit, nor can the Spirit produce the fruit of the flesh. A foundational principle of the created universe, is that like kind produces like kind (Gen 1:11-12). But here we see Paul, upholding the Law as holy and just and good. When we get into Romans, which is next after Acts, we will go into Paul’s terminology and theology in depth, so that we can understand what he is talking about when he says, “delivered from the Law” and other passages.

Why will the persons who practice these things not inherit the kingdom of God? These things are all prohibited by the Law.

Paul says he becomes as one without the Law in order to win those who are without the Law, however, he adds the big qualification, lest anyone should misunderstand him, that he is not without God’s Law, but remains under God’s Law; i.e. obedient to God’s Law.

“Finally then, brethren, we urge and exhort in the Lord Jesus that you should abound more and more, just as you received from us how you ought to walk and to please God; for you know what commandments we gave you through the Lord Jesus. For this is the will of God, your sanctification … For God did not call us to uncleanness, but in holiness. Therefore he who rejects this does not reject man, but God, who has also given us His Holy Spirit.” 1 The 4:1-8

We walk in a manner that pleases God by obedience to the will of God expressed in His commandments, abstaining from uncleanness, and embracing holiness. What is the definition of unclean and holy? The Torah is the dictionary of the Bible – the New Testament did not exist as yet. Whoever rejects this — that we ought to walk, pleasing God, by obeying His will, by abstaining from uncleanness and embracing holiness as it is expounded in His commandments — does not reject Paul, but God.

So I believe that Paul did not exhort anyone to forsake Moses, either Jews or Gentiles. He is misunderstood, because he contended that salvation could not be had by obedience, and he maintained that true obedience could only come from a new heart by the Spirit. But He did not reject Moses.

It does not harmonize with Scripture that he was advocating for two Torahs. Likewise, two salvations, one for Jews and one for Gentiles, is anathema to the Scriptures (Eph 2:11-20, 4:4-6). God is not schizophrenic! He is the same, yesterday, today, and forever – He does not change and His Word does not change!

In order to show that Paul was not teaching the forsaking of Moses, the apostles wanted him to pay for the vows of some of their number. This is referring to the Law of the Nazirite (Num 6). Paul willingly did so. Now we know he was completely capable of digging his heels in when he felt it transgressed the Gospel, so we know that if he willingly went to pay vows, he did not object to the Law.

Now why did James and the elders bring up the four laws that they applied to the Gentiles back in Act 15 here?

This repeats the din (Hebrew for “ruling,” halakhic decision) of 15:19-20&NN and 15:28-29, reassuring Gentiles that the preceding three verses dealing with the situation dealing with Messianic Jews do not affect the earlier determination that Gentiles can become Christians without becoming Jews.

Paul was actually teaching that children should not be circumcised as a prerequisite for salvation. He was not against circumcision per se, because he took and had Timothy circumcised during one of his trips to Jerusalem (Act 16:3).