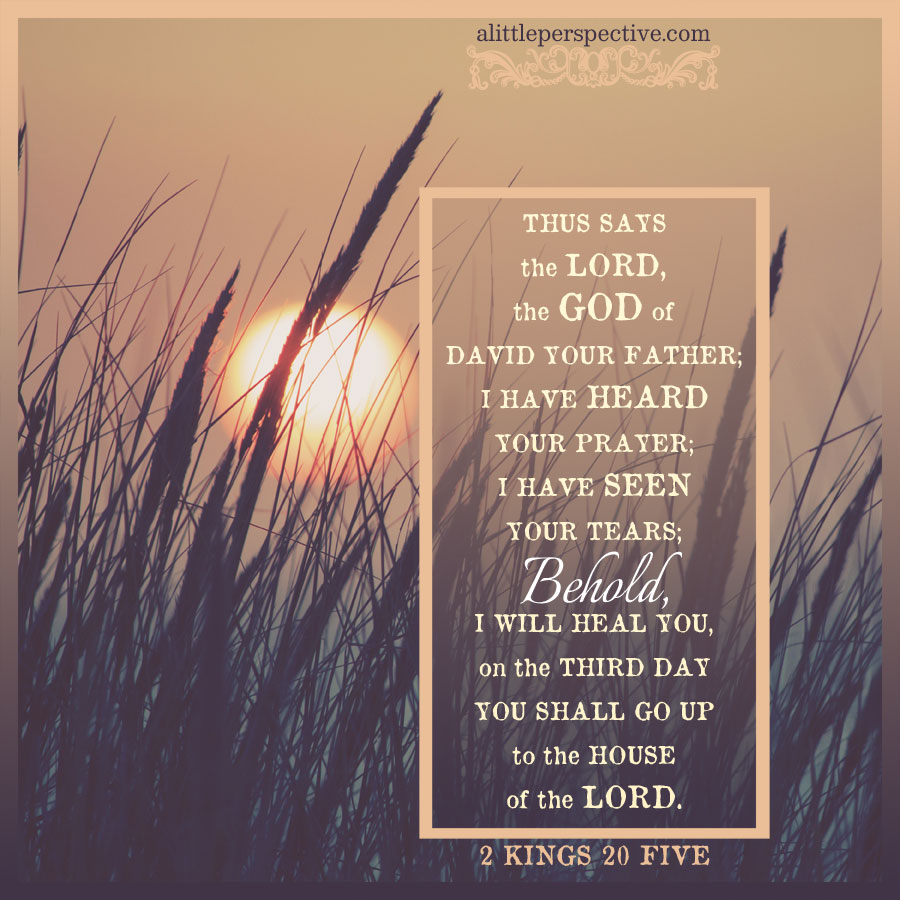 1a) 2 Kin 20:1b, Isaiah the prophet, the son of Amoz, went to him and said to him, “Thus says the Lord: ‘Set your house in order, for you shall die, and not live;’”
1b) 2 Kin 20:2-3 {s} Then he turned his face toward the wall, and prayed to the Lord, saying, “Remember now, O Lord, I pray, how I have walked before You in truth and with a loyal heart, and have done what was good in Your sight.” And Hezekiah wept bitterly;
central axis) 2 Kin 20:4-5a, And it happened, before Isaiah had gone out into the middle court, that the word of the Lord came to him, saying, “Return and tell Hezekiah the leader of My people, ‘Thus says the Lord, the God of David your father;
2b) 2 Kin 20:5b, “I have heard your prayer, I have seen your tears;
2a) 2 Kin 20:5c-6, “Surely I will heal you. On the third day you shall go up to the house of the Lord. And I will add to your days fifteen years. I will deliver you and this city from the hand of the king of Assyria; and I will defend this city for My own sake, and for the sake of My servant David;”

1a) 2 Kin 20:12-13, At that time Berodach-Baladan the son of Baladan, king of Babylon, sent letters and a present to Hezekiah, for he heard that Hezekiah had been sick. And Hezekiah was attentive to them, and showed them all the house of his treasures—the silver and gold, the spices and precious ointment, and all his armory—all that was found among his treasures. There was nothing in his house or in all his dominion that Hezekiah did not show them;
1b) 2 Kin 20:14a, Isaiah went to the king: “What did these men say + from where did they come;”
central axis) 2 Kin 20:14b, Hezekiah said, “They came from a far country, from Babylon;”
2b) 2 Kin 20:15a, He said, “What have they seen in your house?”
2a) 2 Kin 20:15b, Hezekiah answered, “They have seen all that is in my house; there is nothing among my treasures that I have not shown them;”

Then Isaiah said to Hezekiah, “Hear the word of the Lord: ‘Behold, the days are coming when all that is in your house, and what your fathers have accumulated until this day, shall be carried to Babylon; nothing shall be left,’ says the Lord. ‘And they shall take away some of your sons who will descend from you, whom you will beget; and they shall be eunuchs in the palace of the king of Babylon.’” So Hezekiah said to Isaiah, “The word of the Lord which you have spoken is good!” For he said, “Will there not be peace and truth at least in my days?”

2a) 2 Kin 20:20-21 {p} Now the rest of the acts of Hezekiah—all his might, and how he made a pool and a tunnel and brought water into the city—are they not written in the book of the chronicles of the kings of Judah? So Hezekiah rested with his fathers. Then Manasseh his son reigned in his place.

This chapter highlights a sign of the Messiah, the sign of resurrection and life. Someone’s death is certain or seems certain, and yet they are miraculously delivered from death, or raised from death. It is a teaching tool of Scripture which reveals to us when a person or event is acting as a prophetic type for Messiah. The central axis also includes the detail of the third day, as the sign or identifying mark of the miracle.

But what was interesting to me is that the surrounding pairs reveal two prophetic words which come to Hezekiah. In the first, when Hezekiah heard it, he prayed to the Lord and wept. He interceded, in fact, so that the negative event might not come to pass. And the Lord heard him and reversed the prophesied outcome!

In the second, when Hezekiah heard it, he accepted the word of the Lord as good (even though it proclaimed a terrible negative outcome) and he did not intercede. He didn’t intercede because the outcome did not effect him personally! The second negative prophetic outcome was also triggered by receiving a delegation from Babylon. Babylon is always a prophetic type in Scripture of Mystery Babylon the Great (Rev 17) from whence God calls His people to come out (Rev 18:4).