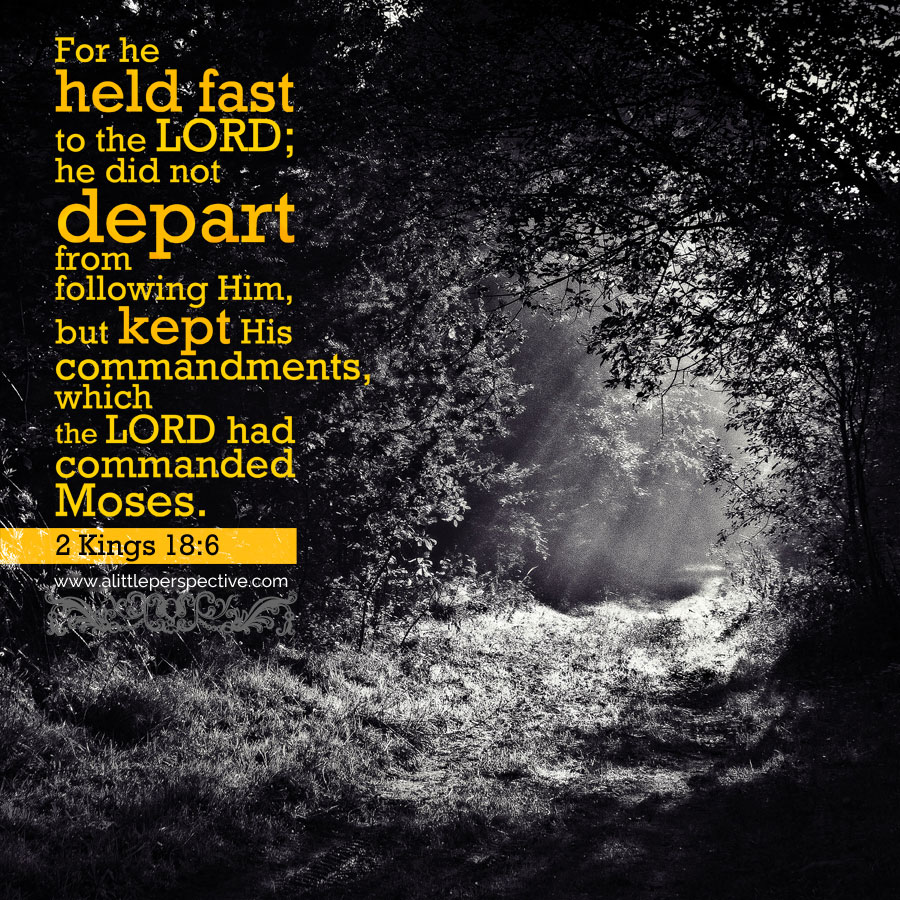 He trusted in the LORD God of Israel, so that after him was none like him among all the kings of Judah, nor who were before him. For he held fast to the LORD; he did not depart from following Him, but kept His commandments, which the LORD had commanded Moses. 2 Kin 18:5-6

Trusted: the Hebrew word is Strong’s H982, batach, bet + tet + chet. The ancient Hebrew pictographs are of the house (bet, so also, family, or in), the basket (tet, so also, surround, contain, or mud), and the fence (chet, so also, outside, divide, half). Now in trying to come to the mountain top or original meaning of this word through the story that its pictographs tell, let us remember that God designed His beautiful language to be understood by five- year- olds looking at the pictures. The picture being painted is of the house or family, surrounded by a wall. Batach, to trust, is a state or place of safety and security.

Held fast: the Hebrew word is Strong’s H1692, dabaq, dalet + bet + quph. The ancient Hebrew pictographs are of the door (dalet, so also, move, hang, enter), the house (bet, so also, family or in), and the sun on the horizon (quph, so also, condense, circle, time). We have seen this Hebrew root before! It is the same word used in Gen 2:24, that the man leaves his father and mother and cleaves (dabaq) to his wife:

“Cleave” is the Hebrew word Strong’s H1692, dabaq. The lexicons say it means to adhere firmly as if glued. The ancient pictographs  are of the door, the house, and the sun on the horizon. So the mountain top meaning of the word from the ancient Hebrew is to enter the house at sunset. In other words, when the husband’s day of working in the fields is done, he goes home to his wife. He doesn’t make himself unavailable to his wife by working till midnight every night as a workaholic, or going out with the guys, or finding other things to occupy his time (which equals his heart) in other places. He enters the door of his house (where his wife is) at sunset, at the end of every day. For fifty or more years, day in and day out!

Noah found grace in the eyes of the LORD (Gen 6:8). Salvation by grace through faith. When God told him to build an ark (gave him a commandment, Gen 6:13-14), he obeyed (Gen 6:22). He believed God’s Word, and so acted on that Word in obedience.

The life of Hezekiah is only another example in a long line of examples, that reveal that following God does not only mean declaring a mental agreement of belief in axioms about Him (a Greek way of thinking), but out of that belief, faith, or trust, flows the action of obedience to the LORD’s Word (a Hebrew way of thinking) and the keeping of His commandments which had been given to Moses (torah).

Trust in the LORD, saving faith and belief, is first. Following Him, however, means, walking in His path, behind Him. The torah describes His way of walking and the boundaries which define His path. We are called to be disciples, or followers, amen?

It means trusting in Him and holding fast to Him securely when the Assyrians come around boasting great things and trying to make us afraid, and obeying His commandments. I am not trying to emphasize obedience over trust. But the American church has erroneously thrown obedience out of the window, emphasizing trust to the exclusion of all else, something historical Christianity never did. And I am trying to return to the balance from the Scriptures.