You are here: Home / Bible Study / corinthians / 2 corinthians 8, communism as an economic system

In this chapter, Paul is encouraging the Corinthian church to give generously. He sent this letter by the hand of Titus, one of his trusted friends and sons in the faith. And Titus was to bring back a gift from the Corinthian church, as all the churches throughout the empire were doing. At that time there was a famine in Judea, and the church at Jerusalem was suffering because of the high price the famine placed on food. So Paul determined to raise a collection among the Gentile churches to send to Jerusalem to relieve the saints. Corinth was a rich city and could well afford it. Paul was pricking their pride a little bit by telling them that the church in Macedonia (which was Philippi), which was not a rich church, gave the greatest gift so far, LOL.

But notice this passage:

For I do not mean that others should be eased and you burdened; but by an equality, that now at this time your abundance may supply their lack, that their abundance also may supply your lack—that there may be equality. As it is written, “He who gathered much had nothing left over, and he who gathered little had no lack.” 2 Cor 8:13-15 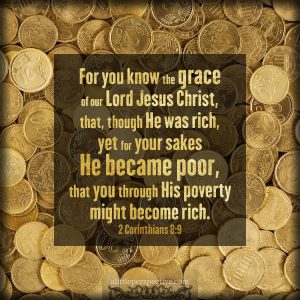 There are a lot of Christians who believe that the Scriptures teach that communism as an economic system is the system the Bible teaches, not capitalism; that equality in income is the biblical standard. This is the passage they use to support this position.

Is that true? I do not believe it is. First, definitions: communism is the system whereby a central power controls wealth, so that wealth is taken from those with more and given to those with less. In order to better accomplish this, the central power also owns the business and industry of that nation.

Capitalism is the system whereby the central power is minimized to the greatest extent, so that individuals make as much or as little wealth as they desire. In order to better accomplish this, the exchange of business and industry for wealth (the market) remains free from regulation of any kind and is completely driven by individual choice (supply and demand). In spite of all the talk you hear on the news, we have not had a free market in this country since 1929. Government subsidies and unequal taxes on certain products (cigarettes, gasoline) and certain classes but not on others creates a regulated, not a free, market.

In the 1700s, Adam Smith wrote a book called The Wealth of Nations, and in it he makes the case that the biblical economic system is capitalism, which he proves by Scripture and history, and that free markets are the only way a nation has to create wealth.

Communism can never begin in a market that has no wealth. As an economic system, it cannot create wealth. It must always be imposed on top of wealth which has already been created, because it depletes wealth (Russia was a very wealthy nation at the time of the Russian Revolution: the czars and nobility had so much wealth, that it was able to sustain a communist economic system for 70 years).

Did you know that when the Puritans came over here from England on the Mayflower and stepped on Plymouth Rock in 1620, the first economic system they tried was communism? Since they were almost all Christians and wanted to establish their community on biblical principles, every family was given the same size parcel of land, and all the fruit of their land was deposited in a common storehouse in the center of the settlement. Out of that storehouse, each family took out the food that they needed.

Because they established this system, in the first year the Puritans experienced a great famine in which 50% of their number perished. The problem was not with the theory, it was with the way it has to be enforced by a central power. Paul even says,”I speak not by commandment, but I am testing the sincerity of your love by the diligence of others.” In other words, he wasn’t commanding them to give, but encouraging them to give. Whenever you command someone to give, you have broken one of the Ten Commandments: Do not steal. No one can give under duress, because then it ceases to be giving. If the central power takes the wealth of someone by force, as communism must do in order for all things to be equal, then the central power has stolen and has broken God’s Law.

In short order the communist system was abandoned so that the community could be saved. The land was reapportioned by size – the larger families received more and the smaller families received less – and every man was encouraged to work for his own family. The sharing was discontinued. Immediately the famine ended and the colony began prospering so greatly that it absorbed at first hundreds, then thousands of immigrants each year. The capitalist system creates wealth, because it provides men with the motivation and the reward for their hard work. You can read all about this in William Bradford’s diary, Of Plymouth Plantation.

The problem with communism is that one of the commandments must be broken in order to implement it – Do not steal. And the problem with capitalism is that one of the commandments might be broken as it is implemented – Do not covet. This is why John Adams (America’s second president) said that the system of government the founding fathers designed was fit only for a righteous and religious people. Freedom can only be enjoyed by people willing to be controlled from within so that controls from without are not necessary. But when a society abandons self- control or resistance to sin, then controls from without become necessary, and we relinquish our freedom.