You are here: Home / Bible Study / corinthians / 2 corinthians 2, the fragrance of Christ

This passage forms a chiastic structure: 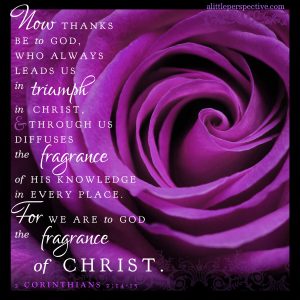 Isn’t this the most amazing thing? We smell like someone, whether we are trying or not trying, as we go about our daily business in the world. We diffuse the fragrance of Christ to all those around us. Now there are two kinds of people in the world who notice our aroma: those who are being saved, and those who are perishing. These two kinds of people both smell the same aroma about us – the fragrance of Christ. But to one it is a pleasant, attractive smell, and to the other it is a repulsive, foul smell.