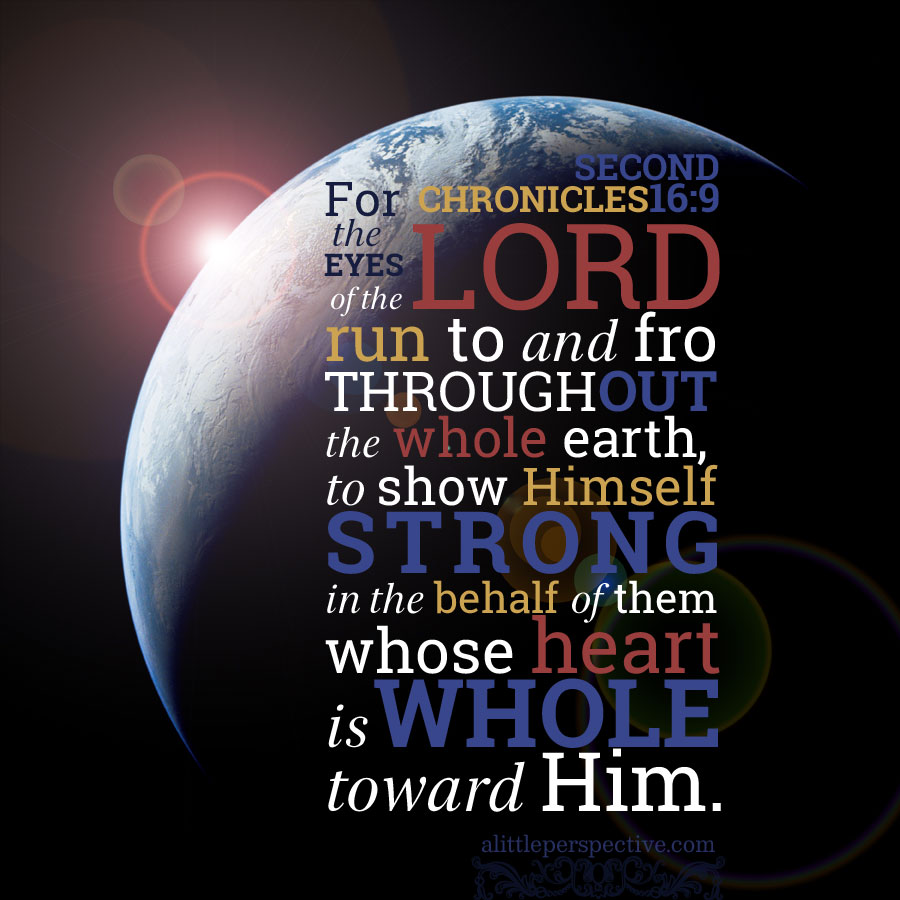 The unusual chiastic structure for chapter 16:

1a) 2 Chr 16:3b, Break your treaty with Baasha king of Israel, so that he will withdraw from me;
central axis) 2 Chr 16:4, Ben-Hadad did so: he sent the captains of his armies against the cities of Israel;
2a) 2 Chr 16:5 {s} When Baasha heard it, he stopped building Ramah and ceased his work;

1a) 2 Chr 16:7a, Hanani the seer to Asa: Because you have relied on the king of Syria;
1b) 2 Chr 16:7b, And have not relied on YHVH your God, the army of Syria has escaped from your hand;
central axis) 2 Chr 16:8a, Were not Ethiopians + Lubim a huge army with very many chariots + horsemen?
2b) 2 Chr 16:8b-9a, Because you relied on YHVH, He delivered them into your hand/ YHVH shows Himself strong;
2a) 2 Chr 16:9b, In this you have done foolishly, therefore from now on you shall have wars;

What stood out to me today:

“For the eyes of the LORD run to and fro throughout the whole earth, to show Himself strong on behalf of those whose heart is loyal to Him.” 2 Chr 16:9

But the high places were not removed from Israel. Nevertheless the heart of Asa was loyal all his days. 2 Chr 15:17

What is a loyal heart? (The KJV translates it as ‘perfect.’) The Hebrew is Strong’s H8003, shalem, from the primitive root Strong’s H7999, shalam; shin + lamed + mem. The ancient Hebrew pictographs are of the two front teeth + shepherd’s staff + water or chaos. The Ancient Hebrew Lexicon says that the shin had been transposed from a sin, a thorn, and the word picture thus painted was of the thorns (sin) from which the shepherd (lamed) drew the sheep, taking away from them that which was causing pain or trouble (mem), or of the thorns with which the shepherd surrounded the sheep, adding to them that which would prevent pain or trouble (for a shepherd surrounded the sheep fold with thorn bushes at night, in order to prevent predators from coming in among the flock).

So shalam means, taking away from, or adding to, whatever is necessary to make complete or whole. This word is also the root of shalom, the Hebrew word for peace or well being. This is why the lexicons say that “perfect” means, to be in a covenant of peace.

God made a covenant of peace with Israel at Mount Sinai (Exo 19:3-5). Israel would take YHVH for their God — they would worship Him and walk in His ways. And God would take Israel for His people — He would be their God, He would be the One who would deliver them from trouble and save them from destruction. He would be the One who would provide for their prosperity and heal their diseases. Asa took the idols out of Judah and returned Judah to their covenant of peace. Under Asa, Judah again worshiped YHVH. Thus when the great army came from Egypt under Zerah, God wrought a great deliverance for Judah. They were walking in their part of the covenant of peace, and God was walking in His part of the covenant of peace. This is why it troubled God, that the next time Asa needed deliverance, he relied on the king of Syria. The next time Asa needed healing, he relied on the physicians. Asa began looking to someone other than God to be his savior and deliverer.

So someone with a loyal or perfect heart toward the LORD, is someone who has taken the LORD for their God, to love Him, to walk in His ways, and to rely on Him. It does not mean that person is entirely without fault (the Webster’s definition of perfect.) It is someone who understands that they have a covenant of peace with his Maker and His God, and so when they face any trouble in life, they rely on Him. In fact, God’s eyes are searching the earth to find those who will rely on Him to show Himself strong on their behalf! God wants to bare His mighty right arm for our sakes!

Therefore, having been justified by faith, we have peace with God through our Lord Jesus Christ, through whom also we have access by faith into this grace in which we stand, and rejoice in hope of the glory of God. Rom 5:1-2