Okay. Last night I cracked the code for Social Security. I did it for YOU and for @realDonaldTrump. This thread is the definitive PURELY FACTUAL primer.

@TrumpWarRoom needs to take note of this video:

Biden loves the troops SO MUCH that he and his people let the flag TOUCH THE FLOOR. Look at the fringe of the flag between the two Masketeers. 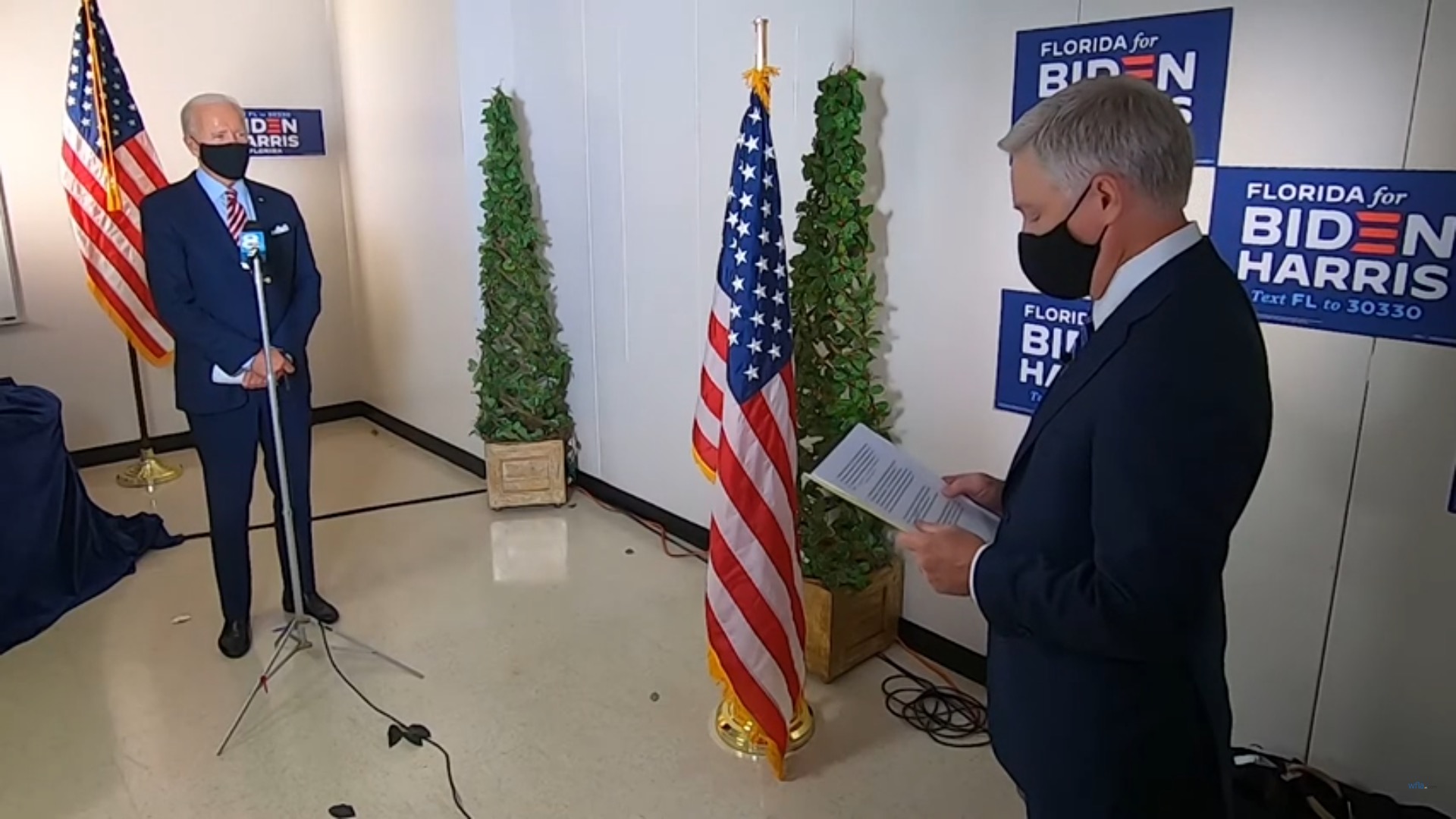 The only thing I’m going to address is Biden’s LIE that Trump will get rid of Social Security. First debunking:

Fact check: President Trump has not said he will terminate Social Security

Now, THIS is where the FACTUAL information became almost impossible to find, since there’s no such thing as unbiased reporting on Social Security. BUT I FOUND TRUMP’S SOLUTION. He hasn’t announced it, because it’ll blew everybody’s mind, and he NEVER gives advanced warning.

First, we’ll assume that everybody knows what Social Security is. How is it funded?

What are the Social Security trust funds, and how are they financed?

“Social Security trust funds provide cash benefits for the elderly and disabled as well as for their spouses and dependents. They are funded chiefly through payroll taxes.”

Trump says he wants to ELIMINATE payroll taxes. WHY?

“Because the employer portion of the tax raises the cost of hiring workers, economists believe that this tax is passed on to workers in the form of lower compensation. Thus, workers effectively bear the entire tax.”

(See previous link “What are the Social Security trust funds, and how are they financed?”)

Workers pay both income tax AND the entire payroll tax, and the payroll tax means lower wages. It’s ANOTHER incentive for American companies to go overseas.

But payroll taxes comprise a WHOPPING 36 percent of the federal revenue stream–money going into federal coffers. This illustration is accurate. I confirmed it with government figures. 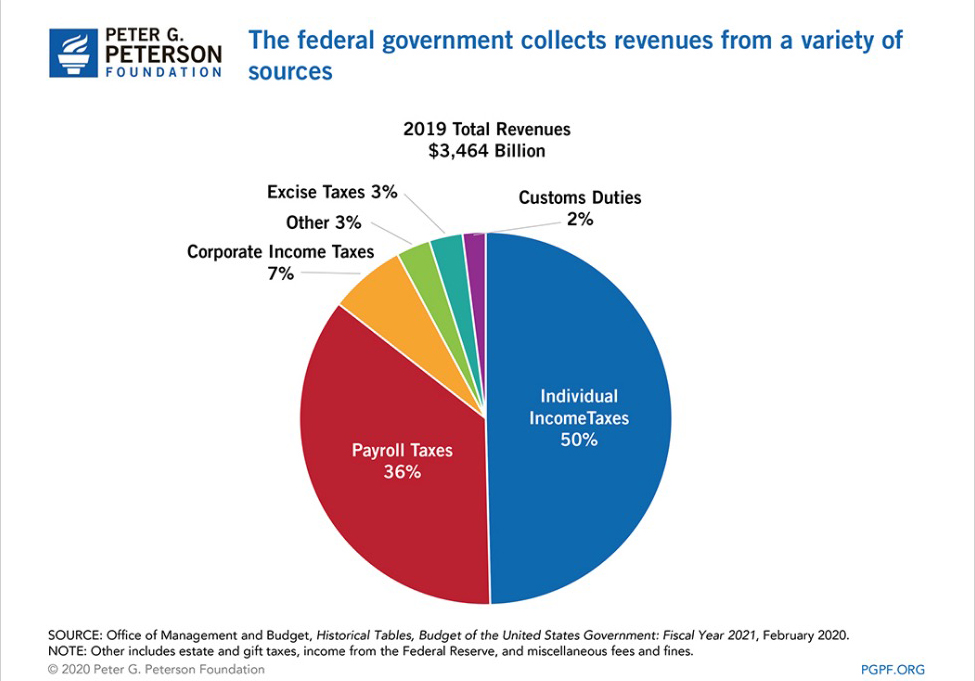 Trump wants to eliminate 36 percent of the federal revenue stream! WHAT THE HELL IS HE THINKING?! I’ll get back to that.

Trump wants to REPLACE payrolls taxes with financing from the general fund. TRY AND FIND THE REVENUE SOURCES FOR THE GENERAL FUND. Here’s the DEFINITION of the general fund:

But they don’t give you a clear, simple answer about where the money comes from. NOBODY DOES. When you use search engines, all you get is bitching about how states aren’t getting enough money for their pork projects.

(Twitter is working at a frenzied rate to try and stop me from posting the factual information about this. Bear with me. Their making my tweets appear in old threads.)

FINALLY, I found a clear, simple explanation of the general fund’s financing. FROM THE TRUMP ADMINISTRATION. Of course.

“The general fund is the largest fund in the Government and it receives all collections not dedicated for some other fund, including virtually all income taxes and many excise taxes.”

“An excise tax is a legislated tax on specific goods or services at purchase such as fuel, tobacco, and alcohol.”

“A federal excise tax is usually collected from motor fuel sales, airline tickets, tobacco, and other goods and services. Excise taxes are primarily for businesses.”

SO HOW WILL TRUMP REPLENISH THE GENERAL FUND AND SAVE SOCIAL SECURITY? Two ways.

But first! The Social Security Trust Funds are already doomed. EVERYONE agrees.

No amount of raising taxes for save it. And here’s where Trump plan comes in. His Fiscal Year 2020 budget tells us the first prong in what will be AT LEAST a two-pronged strategy. “A BUDGET FOR A BETTER AMERICA.”

A BUDGET FOR A BETTER AMERICA

The first prong is to make the US the most business-friendly country in the world. You LOWER individual and corporate taxes while creating VASTLY BIGGER tax bases. Instead of HALF of all Americans not paying taxes, you get them MORE MONEY, and it becomes taxable.

But the tax RATES are low. California has a SUICIDAL tax system. It depends on the rich always MAKING money. When the economy goes south, the rich stop MAKING money, and California’s revenue streams STOP.

The federal government can RETRAIN ITSELF to use the vagaries of free-market capitalism.

Taxation alone DOESN’T WORK. Trump is getting rid of red tape and regulations designed to siphon off money from all of us. Even though taxes are LOWERED, the government is taxing a MASSIVE economy. So that’s the first prong. The second prong is WILDLY RADICAL.

What government can learn from venture capital

In the past, consumer products “spun OFF” from government projects. The government made the technology FIRST, and then WE got it. By REVERSING the process, the government can–for the first time in human history–CREATE CAPITAL.

Traditionally, the private sector creates capital, and the government destroys it by taking it and using it. There’s absolutely no doubt whatsoever that the Trump public-private initiatives will lead to government venture capitalism and other revenue-creating operations.

I TOLD you that Trump is the most radical politician who ever lived. His plan is to PERMANENTLY CHANGE the fundamental role of government by created unity between the public and private section that CAN’T BE DISSOLVED BY SUCCESSORS.

My guess is that the Pentagon, for example, will become essentially self-funding.

See, here’s the built-in problem with the current system: Politicians BRIBE the voters with pork, shake down corporations, extort the private sector, and enrich themselves.

Lawmakers write the laws governing their own behavior, so they aren’t accountable. Lobbyists bribe politicians to destroy competitors and get special treatment. “Special interests” buy politicians. And politicians steer lucrative government contracts to their spouses.

Trump plans to eliminate that. He’ll have the House and the Senate to pass his reforms. And at the end of his second term, he’ll have revolutionized the government in such a way that it will never be changed. Of course oversight is needed.

Self-funding departments and agencies will be required to report regularly to investigative bodies. But the abuses will be eliminated.

I’m sure Trump has ideas that we can’t even conceive.

So THAT is the plan.

Now you know the INARGUABLE DEFINITIONS of everything being discussed, and you understand that Trump plans on changing EVERYTHING.

Biden? Come on. He’s already said that he plans on eliminating shareholder capitalism and chasing all corporations out of the US.

THAT ALONE will destroy us.