You are here: Home / Family / work in progress / your God-given identity 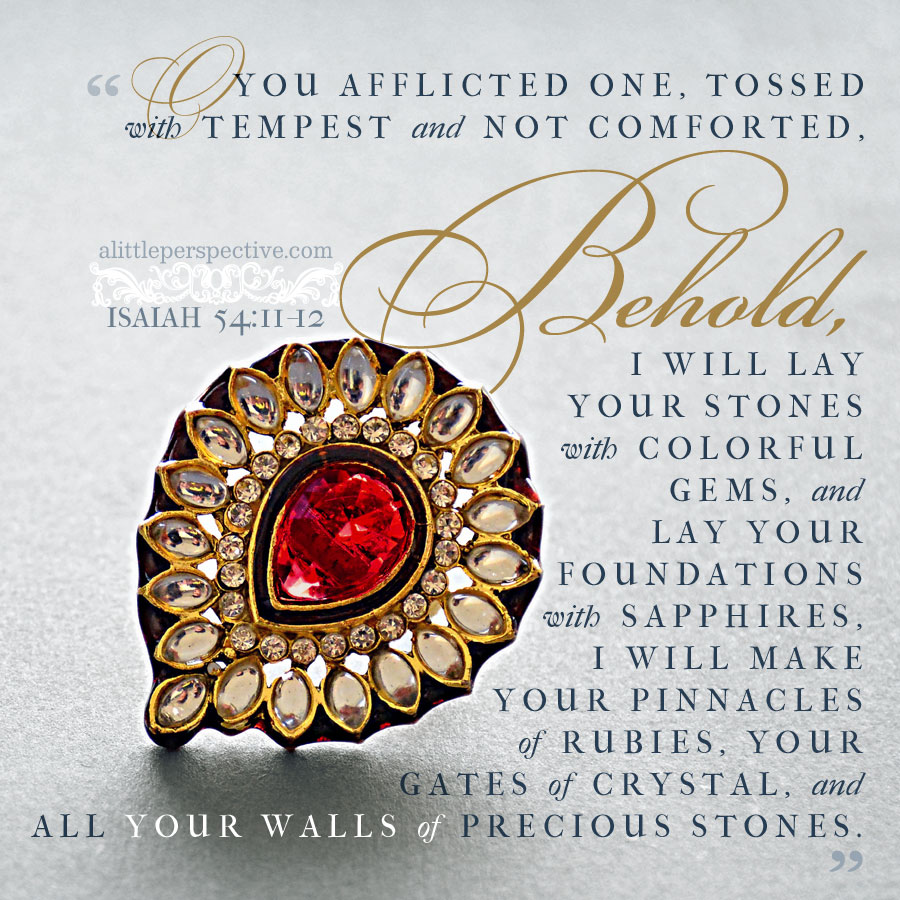 My identity in the Lord is a sparkling jewel.

“O you afflicted one, tossed with tempest and not comforted; Behold, I will lay your stones with colorful gems, and lay your foundations with sapphires. I will make your pinnacles of rubies, your gates of crystal, and all your walls of precious stones. All your children shall be taught by the LORD, and great shall be the peace of your children.” Isa 54:11-13

My identity in the Lord came about when I was a young woman; God took me on a journey to heal my heart, mind, and soul of areas from my childhood when my father had “provoked me to wrath,” to use Scriptural language.

And you, fathers, do not provoke your children to wrath, but bring them up in the training and admonition of the Lord. Eph 6:4

My Dad was a very strong influence in my life. But to be honest, he was a scoffer, the biblical definition of scoffer. I honor my Dad’s memory, and I won’t go into details here. Let’s just suffice it to say that I was afraid of my Dad when I was a girl; I grew up deeply wounded because his choice of words to me on a daily basis were wounding words, discouraging words, and mocking words, and not loving, encouraging, or uplifting words.

As a result of my Dad’s words over me as a child, I had a stronghold of lies built up in my heart as to my identity as a person. The enemy (let’s put the blame where it really belongs) exploited my Dad’s own issues and pain to use him as a tool to build the bricks of that stronghold very thick. By the time I was an adult, I had nearly every stronghold of lie that there was built in my heart.

When God became my heavenly Father, He set about correcting my identity. Now this took several decades in real time, because I didn’t have someone in my life who knew the Bible well enough to know about God-given identities and how to fix broken identities and childhood pain. But the Lord knew. He gave me a new identity, sparkling jewel, and the Isa 54 scripture to go with it.

Here is the beautiful thing. All of God’s judgments are just, Amen? His judgment about who I am in Him is likewise just. When He gives us our true, positive, encouraging, and uplifting identity, what it is that He sees when He beholds us, and we fight against receiving it as true, then we are really calling His own judgment into question.

I had to find the Scriptures that declared me to be a sparkling jewel and His precious treasure, and then wrote them out. Every time I heard my Dad’s critical voice in my head, I would get out my Scriptures and read them outloud to myself, to replace the negative and false identity my earthly father had given me with the positive and true identity that my heavenly Father had given me.

Faith comes by hearing and hearing by the Word of God!

I was casting down (false) arguments and (lying) strongholds in my heart, and building in its place a stronghold of truth.

If the identity you carry from your earthly father is a false or negative identity, God has a true and positive identity for you! Ask Him to reveal it to you, and He will, with confirmation!

For a biblical example of the truth of God-given identities, please see

Matthew 16:13-19, And I also say to you (Peter receives His God-given name and identity)