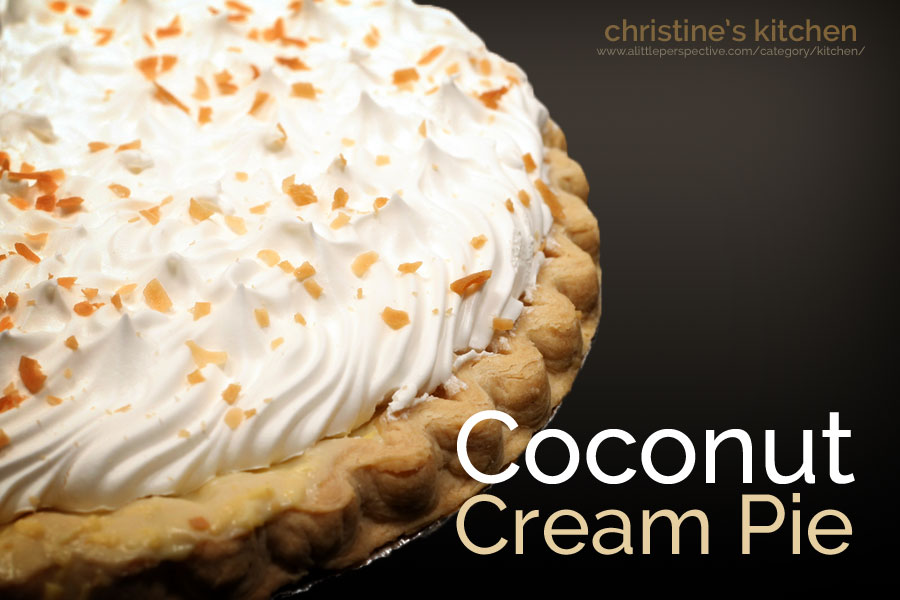 Coconut Cream Pie is my brother’s favorite dessert, and what he had to have every year on his birthday instead of birthday cake. Coconut also happens to be my son-in-law’s favorite. This is for you, boys!

Prepare the pastry for one baked 10-inch deep dish pie shell, bake and let cool while preparing the coconut filling.

Coconut filling: Soften gelatin in water in a glass measuring cup and set aside. Beat egg yolks until thick and lemon- colored. Combine sugar, cornstarch, and salt in a heavy saucepan; whisk in coconut milk over medium heat until the sugar is dissolved. When the mixture starts steaming, temper the egg yolks by whisking in 1 cup of the milk mixture, blending well. Now gradually add the egg yolks to the saucepan, whisking to blend well. Stir constantly over medium heat until the pudding reaches a gentle boil and begins to thicken. Stir in coconut and cook for 2 more minutes or until the pudding has thickened to a custard. Stir in the coconut extract and butter until the butter is melted and incorporated. Whisk the softened gelatin into the hot custard. Scrape the coconut pudding into a glass bowl; cover with plastic wrap, pressing the wrap down onto the surface of the pudding to prevent a skin from forming. Set into an ice bath to cool to room temperature. Scrape into cooled pie shell, cover, and chill in refrigerator until completely cold and set.

Whip cream with 1/4 c sugar and 1 tsp vanilla to stiff peaks. Spread or pipe the whipped cream over the chilled pie and garnish with toasted coconut, if desired. Serves 8-12.

** I have tried Frontier brand all natural coconut flavor, which I did not like. Alton Brown, of course, has a recipe for making your own coconut extract, if you cannot find it.

My first attempt to make a coconut cream pie was using the recipe from the Food Network pie championships. I had multiple troubles with that recipe, and scrapped it in favor of this method of making coconut cream pie, using a modified version of Aunt Kellie’s creamy vanilla pudding, which I thought was easier to make, and tasted better.