You are here: Home / Bible Study / applied word / there is too much, let me sum up 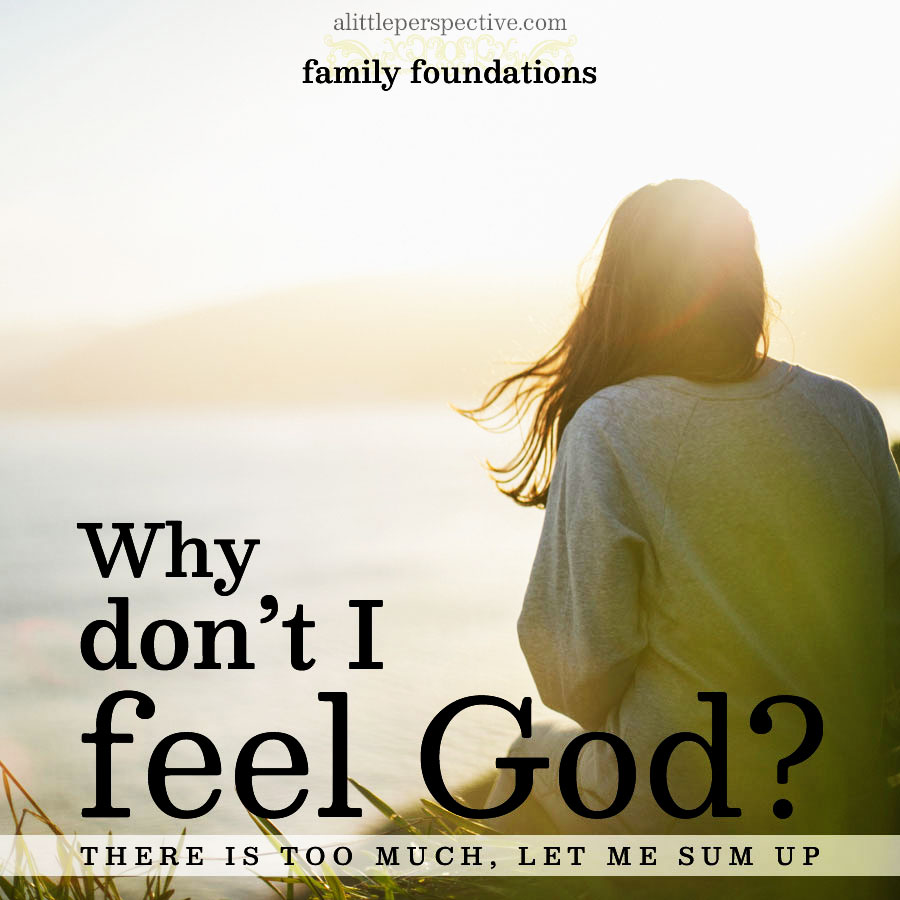 God is with us forever, according to the Scriptures, but sometimes we don’t feel Him with us. When that happens, we cannot feel His love for us, His comfort when we suffer, or any other thing He intends. Why don’t we feel God?

First we have to realize that feelings are a notoriously unreliable barometer of truth, because many variables, such as nutrition or health, can affect them. God’s word is absolute truth, the perfect description of reality. When what we are perceiving as reality through the filter of our senses, thoughts, and feelings in this natural world contradicts God’s word, it is this fallen natural world, or our perception of it, which is wrong, NOT God’s word.

But we can exercise self-control over capricious feelings. The feelings spring from the soul, the interface that allows a born-again spiritual being such as ourselves to live in a fleshly body of death.

The soul can either be influenced by our born-again spirits, or our dead flesh. The battleground for that influence is in the mind. Our warfare is in pulling down strongholds (deeply-held false beliefs in the core of our beings), casting down arguments, anything which exalts itself against the knowledge of God, and taking every thought captive to the obedience of Christ, who is Truth.

Feelings follow thoughts. If someone feels depressed, anxious, or irritable so often that it has become their character, it is because the thoughts of their mind are habitually such so that feelings of depression, anxiety, or irritability are produced. Trying to change how we feel is wasted effort. Changing what we think will succeed in changing how we feel.

This is important, because our feelings, which are governed out of our thoughts, and the strongholds of our hearts, in turn govern our habitual actions, and thus our character. Even one ungodly character trait is a red flag on top of a stronghold of some lie.

And those lies are not harmless. By them, by getting people to believe them as if they are truth, the enemy carries out his work of stealing, killing, and destroying. But truth  sets free from sin, death, and the power of the devil. The Scriptures contain the truth that is the weapon of our warfare, by which we pull down the strongholds of lies and establish those of truth instead.

We do this by a process of training our hearts in truth, by taking every (ungodly) thought captive, and requiring it to be obedient to the truth of Christ. Consistent, determined assault – discipline – is the key to success, just as it is in any other training, such as child training, or military service basic training.

Stubborn strongholds will benefit from a more intensive study of the truth of God’s word. Thirty minutes a day can change a person’s life. The first day the truth to be established is defined, and one Scripture identified. The second and third days, key words from the Scripture are defined. The fourth day, the Scripture is personalized, using insights gained from the definitions. The fifth day, the person ties together and reflects on all he has learned that week. And then the process is repeated with other Scriptures, which together thoroughly establishes the stronghold of truth.

Thus feelings, which are in the first place unreliable barometers of truth, can be affected by nutrition and health, and also by past experiences which have established strongholds of belief in our hearts, contrary to the absolute reality described in God’s word.

But another factor affects feelings also …

« War on Christmas
Friday night at the movies »