You are here: Home / Bible Study / applied word / the wisdom of esther 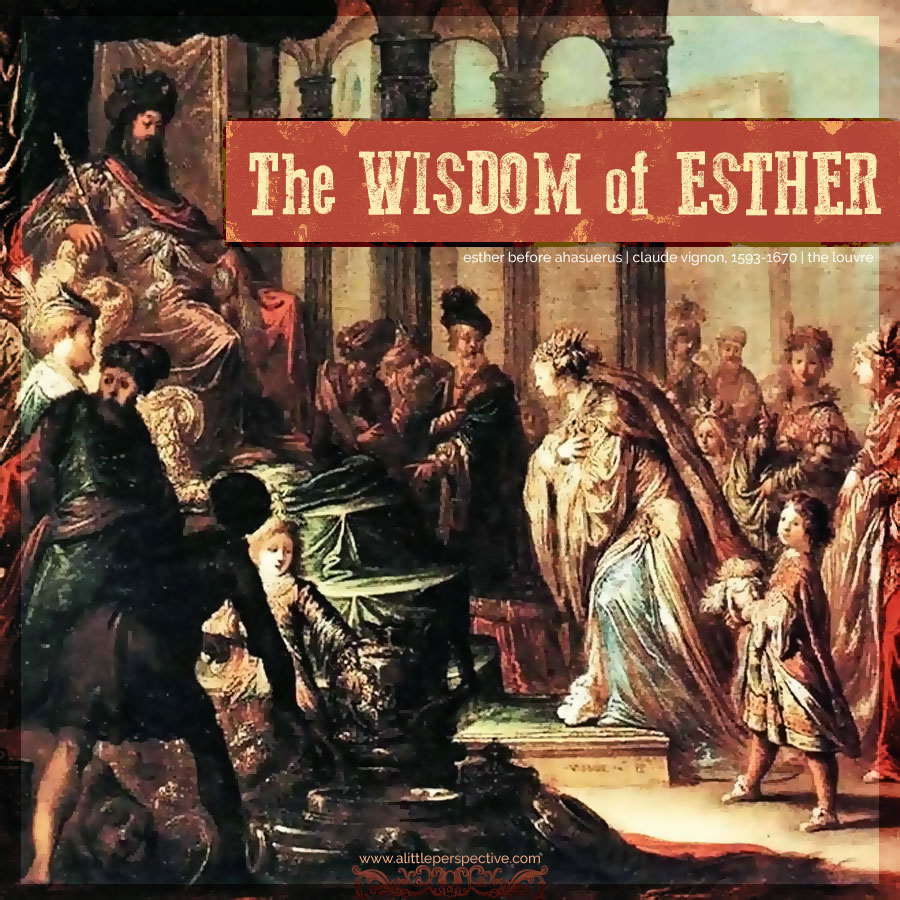 What about my own obedience to Torah? In the beginning, when my husband was still opposed to keeping feast days, or not setting aside December 25th as a holy day, I turned to the book of Esther for wisdom. Esther was in a mixed marriage. She was a Jew who hid her Jewish heritage, and her husband was Ahasuerus, the king of Persia, of course a Gentile. She did not make demands on him that we can see from the history. So we have a powerful picture of the one in authority determining the course of his household.

But the time came when the survival of her people depended on his intervention as king. She had a request to make of him, but she was in a position of needing his favor even to make the request. Of course, she also wanted his favor in the granting of her request. We do not have the complications she had, and thank You for that, Father!

Then Esther told them to reply to Mordecai: “Go, gather all the Jews who are present in Shushan, and fast for me; neither eat nor drink for three days, night or day. My maids and I will fast likewise. And so I will go to the king, which is against the law; and if I perish, I perish!” So Mordecai went his way and did according to all that Esther commanded him. Est 4:15-17

She chose a wise course of action. She first prepared herself spiritually. She fasted and prayed for success, and had others fasting and praying for her success also. Where is her railing against the king that she is in this position in the first place? It is not there. Where is her resentment and impatience? It is not there. Instead, she returned honor and respect to the king, and humbled her own heart.

Now it happened on the third day that Esther put on her royal robes and stood in the inner court of the king’s palace, across from the king’s house, while the king sat on his royal throne in the royal house, facing the entrance of the house. Est 5:1

When the time came to make her request, she prepared herself physically. She put on her royal robes. I assume she looked her best.

So it was, when the king saw Queen Esther standing in the court, that she found favor in his sight, and the king held out to Esther the golden scepter that was in his hand. Then Esther went near and touched the top of the scepter. And the king said to her, “What do you wish, Queen Esther? What is your request? It shall be given to you—up to half the kingdom!” So Esther answered, “If it pleases the king, let the king and Haman come today to the banquet that I have prepared for him.” Est 5:2-5

I felt it was wisdom for me, also, to adopt Esther’s course. I did not make a blanket demand of my husband. “This year I want to celebrate all the Lord’s feast days according to their commandments! And if you don’t agree, you will feel my wrath!” LOL. We women have different ways of making our wrath known. For some it is the silent treatment. For some it is withholding affection. For some it is the passive- aggressive barbs that we slip in there. That is not Esther’s pattern.

But a few weeks before an annual feast day was to occur, I prepared myself spiritually to make my request of my husband. I prepared myself physically. I chose a proper time and place, when his favor was already upon me. And I, gently and with humility, would ask:

“Honey, the feast day of Passover is going to be here soon. I would like to make a special meal of roast lamb, and have a family celebration. (If your husband is a Christian): I have been studying how Jesus is revealed in this feast, and the significance is amazing! Perhaps we, or I if you would prefer, can share it with the children? This is what I was thinking of doing (proceeding with a headline version of your plans. If your husband is not a Christian): This is an important day of significance in my faith. I am not asking you to participate if you do not wish to. But I would like to observe it myself, if you do not mind?”

And when you get a response in the affirmative, be grateful! It will predispose him to favor positively whatever requests you would like to make in the future!

When the time of year came for Christmas, I did the same. But this is how I explained it:

“Honey, I have been your partner in celebrating Christmas from the beginning. But it has begun to tear at my conscience. (Followed by a brief headline version why.) For me, do you see, it is so interconnected with idolatry that I feel ill even contemplating it. I will not oppose you or do one thing to make your life unpleasant if you would like to continue our traditions. But this year, I cannot help set up the tree (or whatever it is) without violating my conscience.”

I asked for a reprieve. I did not demand one. I did not judge him if he did not feel the same way. I gave him his freedom to follow his own conscience without recrimination, even if it meant celebrating Christmas. In the face of that, he returned kindness, and then did not require me to violate my own conscience (as a good man will always do).

When I employed the wisdom of Esther, and prepared myself and my request according to her pattern, he never denied my request. And, I learned that the mother is the grindstone that makes holidays happen for most families. We naturally began celebrating the holidays I planned and prepared for, and the holidays I did not plan and prepare for, soon fell by the wayside, but without strife, drama, or division on my part.