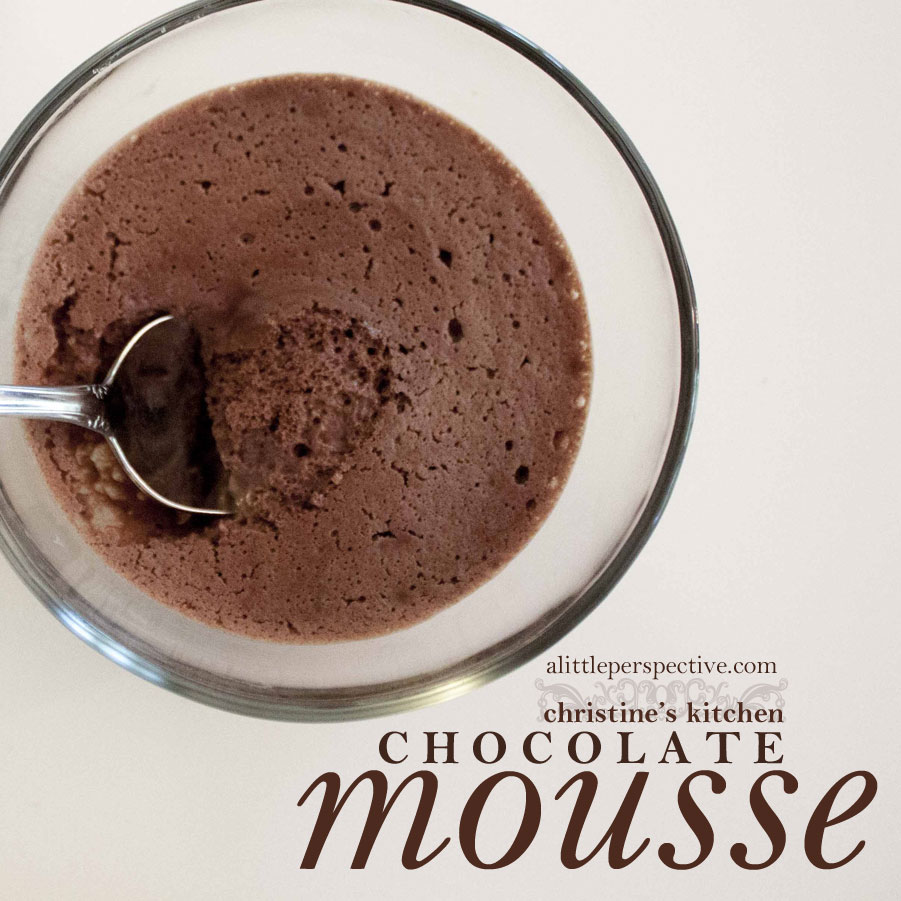 For many years I made Tyler Florence’s Food Network chocolate mousse. Then I tried Fine Cooking’s chocolate mousse, and I became a convert. We think the flavor and texture is better, and the results more foolproof. The Food Network mousse is still available at the above link.

Combine the cream and cocoa in a saucepan; bring to a full boil, whisking to combine. Slide the pan off the heat, add the chocolate and butter, whisking slowly until melted and smooth. Pour the chocolate into a large bowl. Add the vanilla and salt, and set in an ice water bath, stirring constantly until the chocolate cools to room temperature (do not stop stirring or lumps will form). Remove the bowl from the ice bath.

Whip the egg whites in a separate bowl on low speed until foamy, then on medium high until they form soft loose peaks. Slowly add the sugar. Continue beating until the whites are shiny and and form soft peaks.

I need to try this and compare it to the Fine Cooking chocolate mousse, above – it comes very highly recommended as the perfect cross between richness, creaminess, and lightness of texture.

Combine the chocolate, cocoa powder, espresso powder, water, and whiskey in a medium heatproof bowl. Place over a saucepan filled with 1 inch of gently simmering water, and stir frequently until the chocolate is melted and the mixture is smooth. Remove from the heat.

In another medium bowl, combine the egg yolks, 1-1/2 tsp sugar, and salt. Whisk until the mixture lightens to a pale yellow color and thickens slightly, about 30 seconds. Pour the melted chocolate mixture into the egg mixture, and whisk until combined. Set aside for about 5 minutes, until just warmer than room temperature.

In the bowl of a stand mixer fitted with the whisk attachment, beat the egg whites on medium-low speed until frothy. Add the remaining 1-1/2 tsp sugar, increase the mixer speed to medium-high, and beat until soft peaks form when the whisk is lifted. Detach the whisk and bowl from the mixer, and whisk the last few strokes by hand, making sure to scrape up any unbeaten whites from the bottom of the bowl. Using the whisk, stir about one fourth of the beaten egg whites into the chocolate mixture, to lighten it. Then, using a rubber spatula, gently fold in the remaining egg whites until only a few white streaks remain.

In the now-empty mixer bowl, whip the heavy cream at medium speed until it begins to thicken. Increase the speed to high, and whip until soft peaks form when the whisk is lifted. Using a rubber spatula, fold the whipped cream into the mousse until no white streaks remain. Spoon into 6 to 8 individual serving dishes – I like to use teacups – or, if you’re feeling casual, mound it up in a single serving bowl. Cover with plastic wrap, and refrigerate until firm, at least 2 hours and up to 24 hours.

Substitute the sugar called for with Swerve or Monkfruit (my favorite) and proceed as directed. It will not be completely sugar-free because of the bittersweet chocolate, but it will be low in sugar.