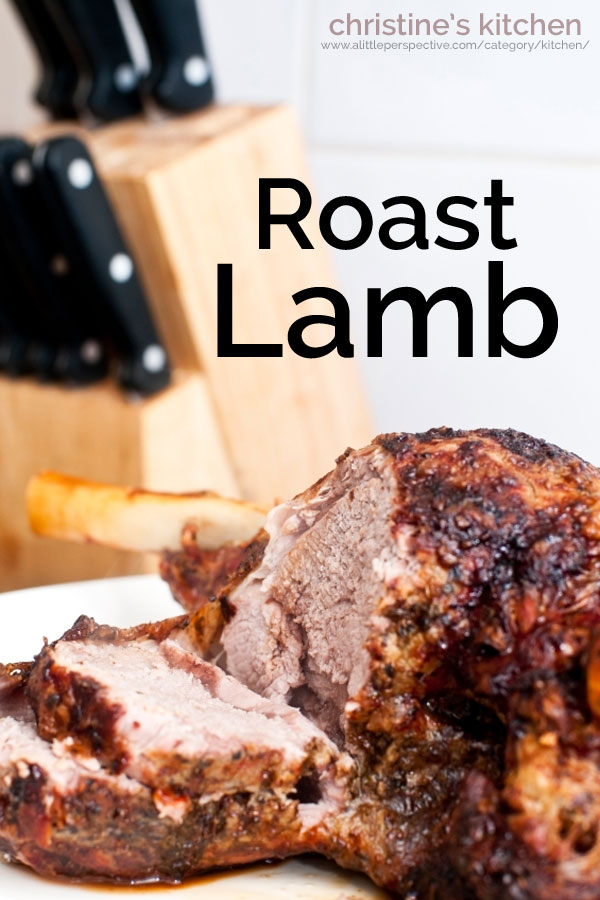 Place lamb and charmoula marinade in a ziploc bag. Squeeze out as much of the air as possible from the bag and seal. Place in a bowl (to prevent a mess if it leaks) and marinate overnight in the refrigerator. Remove the lamb, still in its marinade bag, from the refrigerator at least 30 minutes before putting in the oven.

Remove the lamb roast from its marinade bag. It is normal for some of the marinade to cling to the roast. Generously salt and pepper all sides of the roast. Arrange the roast on the rack fattiest side up, so while the lamb is cooking the fat will melt into the meat. Insert a meat thermometer into the thickest part of the roast, not touching the bone if your roast is bone-in. Place directly on the oven rack over the roasting pan. Then place a cup of water in the roasting pan, so that the drippings fall into the water instead of burning in the hot pan and smoking up the kitchen.

Roast at 425°F for 20 minutes. Then reduce the heat to 300°F and roast an additional hour (for a 6 pound roast), about 10-12 minutes per pound. If you are cooking a roast bone-in, the bone will act as an insulator and will require a longer cooking time than a boneless roast.

After an hour, start checking the meat thermometer. Note that every time you open the oven door, you’ll need 10 minutes or so to bring the oven back up to temperature, thus slowing down the cooking process. So, don’t check too often. Remove from the oven anywhere from 130°F to 135°F for medium rare, or 140°F to 145°F for medium (my preference.) Let stand for 15-20 minutes before carving. While the roast is resting, make a gravy or pan sauce out of the drippings in the roasting pan. To serve, slice the roast into 1/2 inch thick slices against the grain of the meat.

2011 Update: My oven must be wonky, because I have made this lamb for two years now, exactly as the recipe states, and it does not get done in the time given (10-12 minutes per pound at 300). So next time, I am turning the oven temp down to 325 instead of 300, and roasting it for 10-12 minutes per pound, and see how it does then. It might be, because I have other dishes in the oven baking while the lamb is roasting, that I need a higher oven temp.

« homemade heaven
on cooking for sabbath »