You are here: Home / Perspective / america and nation / presidential quotes on God and the Bible 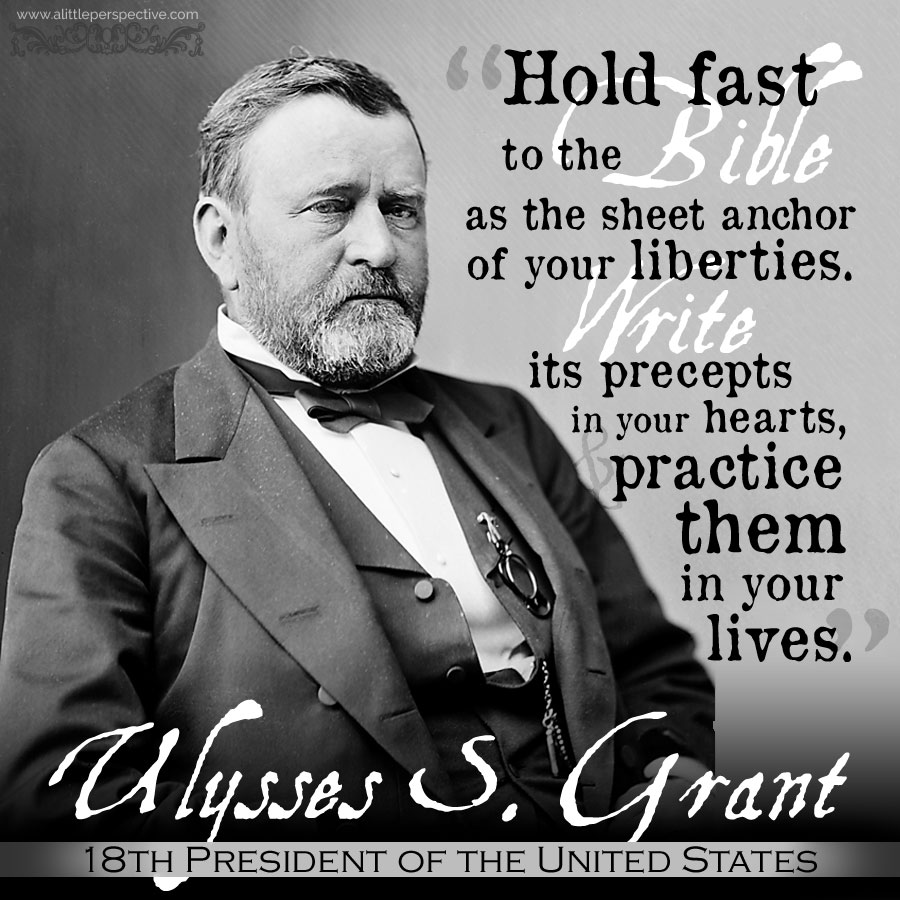 “Oh, eternal and everlasting God, direct my thoughts, words and work. Wash away my sins in the immaculate blood of the Lamb and purge my heart by Thy Holy Spirit. Daily, frame me more and more in the likeness of Thy son, Jesus Christ, that living in Thy fear, and dying in Thy favor, I may in thy appointed time obtain the resurrection of the justified unto eternal life. Bless, O Lord, the whole race of mankind and let the world be filled with the knowledge of Thee and Thy son, Jesus Christ.” Prayer of George Washington, 1st President

“I have examined all religions, and the result is that the Bible is the best book in the world.” John Adams, 2nd President

“God who gave us life gave us liberty. Can the liberties of a nation be secure when we have removed a conviction that these liberties are the gift of God? Indeed I tremble for my country when I reflect that God is just, that His justice cannot sleep forever.” Thomas Jefferson, 3rd President, inscribed on the Jefferson Memorial

“We have staked the whole future of American civilization not on the power of government … not in the Constitution… (but) upon the capacity of each and every one of us to govern ourselves according to the Ten Commandments.” James Madison, 4th President

“The first and almost the only book deserving of universal attention is the Bible. I speak as a man of the world . . . and I say to you, ‘Search the Scriptures.'” John Quincy Adams, 6th President

“So great is my veneration for the Bible that the earlier my children begin to read it the more confident will be my hope that they will prove useful citizens of their country and respectable members of society.” John Quincy Adams, 6th President

“[The Bible] is the rock on which our Republic rests.” – Andrew Jackson, 7th President

“I believe the Bible is the best gift God has ever given man. All the good from the Savior of the world is communicated to us through this book. But for it we could not know right from wrong.” Abraham Lincoln, 16th President

“It is the duty of nations as well as men to recognize the truth announced in Holy Scripture and proven by all of history that those nations only are blessed whose God is the Lord.” Abraham Lincoln, 16th President

“My concern is not whether God is on our side. My great concern is to be on God’s side, for God is always right.” Abraham Lincoln, 16th President

“I do believe in Almighty God! And I believe also in the Bible… Let us look forward to the time when we can take the flag of our country and nail it below the Cross, and there let it wave as it waved in the olden times, and let us gather around it and inscribed for our motto: “Liberty and Union, one and inseparable, now and forever,” and exclaim, Christ first, our country next!” Andrew Johnson, 17th President

“Hold fast to the Bible as the sheet anchor of your liberties. Write its precepts in your hearts, and practice them in your lives. To the influence of this book are we indebted for all the progress made in true civilization, and to this we must look as our guide in the future. ‘Righteousness exalteth a nation, but sin is a reproach to any people.'” –Ulysses S. Grant, 18th President

“If you take out of your statutes, your constitution, your family life all that is taken from the Sacred Book, what would there be left to bind society together?” –Benjamin Harrison, 23rd President

“Almost every man who has by his life-work added to the sum of human achievement of which the race is proud, of which our people are proud, almost every such man has based his life-work largely upon the teachings of the Bible.” Theodore Roosevelt, 26th President

“The Bible is the one supreme source of revelation of the meaning of life, the nature of God, and spiritual nature and needs of men. It is the only guide of life which really leads the spirit in the way of peace and salvation. America was born a Christian nation. America was born to exemplify that devotion to the elements of righteousness which are derived from the revelations of Holy Scripture.”  Woodrow Wilson, 28th President

“The government of a country never gets ahead of the religion of a country. There is no way by which we can substitute the authority of the law for the virtues of men.” Calvin Coolidge, 30th President

“We cannot read the history of our rise and development as a nation, without reckoning with the place the Bible has occupied in shaping the advances of the Republic. Where we have been the truest and most consistent in obeying its precepts, we have attained the greatest measure of contentment and prosperity.” Franklin Roosevelt, 32nd President

“The fundamental basis of this nation’s laws was given to Moses on the Mount. The fundamental basis of our Bill of Rights comes from the teachings we get from Exodus and Saint Matthew, from Isaiah and Saint Paul. I don’t think we emphasize that enough these days. If we don’t have a proper fundamental moral background, we will finally end up with a totalitarian government which does not believe in rights for anybody except the State!” –Harry S. Truman, 33rd President

“The spirit of man is more important than mere physical strength, and the spiritual fiber of a nation than its wealth. The Bible is endorsed by the ages. Our civilization is built upon its words. In no other book is there such a collection of inspired wisdom, reality, and hope.” –Dwight D. Eisenhower, 34th President

“Without God there could be no American form of government, nor an American way of life. Recognition of the Supreme Being is the first, the most basic, expression of Americanism. Thus, the founding fathers of America saw it, and thus with God’s help, it will continue to be.” Dwight D. Eisenhower, 34th President

“Inside the Bible’s pages lie the answers to all the problems that mankind has ever known. I hope Americans will read and study the Bible.” – Ronald Reagan, 40th President

« one torah for the one people of the one God, part three
exodus 3 and 4 »