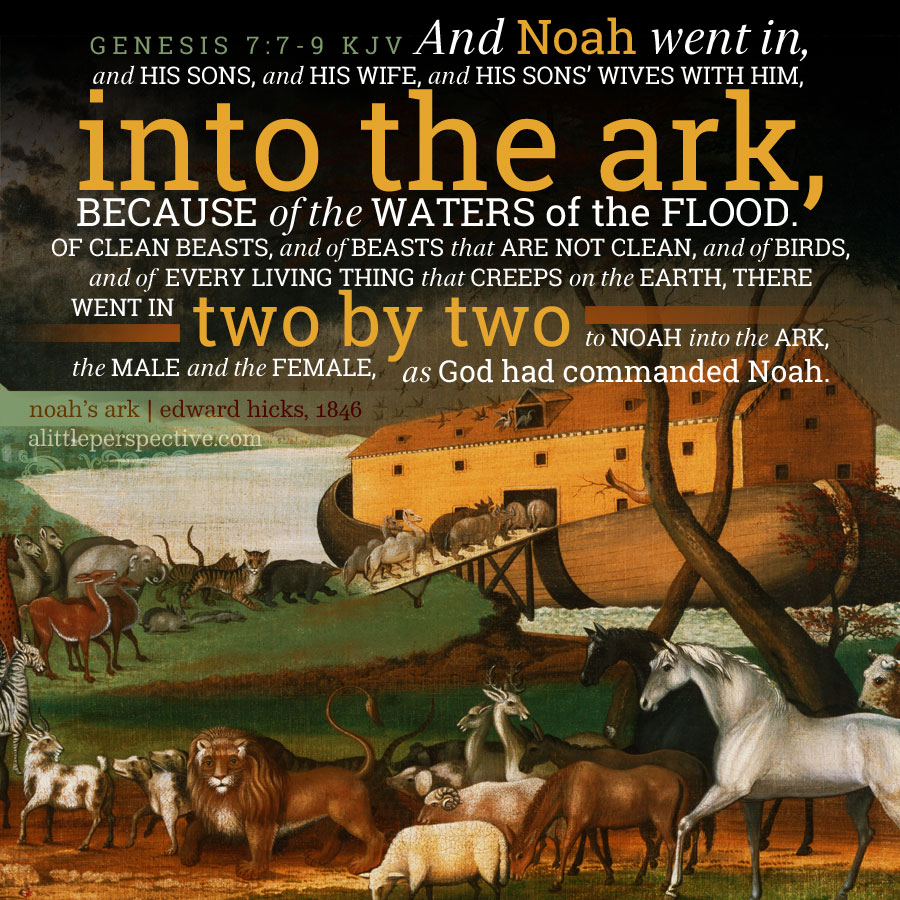 We study the Torah according to the triennial cycle every Sabbath (Why?), being aware of the teaching tools employed by Torah, and looking for them, so that we can get the message God is trying to convey.

Today is the 5th Sabbath of the triennial cycle: parashah (Torah portion) Noach / Noah, Gen 6:9-7:24 (read at Bible Gateway or the Hebrew Bible in English).

Parsha (paragraph) divisions in this week’s Torah portion:
Gen 6:9-12 ends with a parsha stumah, a weak paragraph division.
Gen 6:13-8:14 ends with a stumah.

This means we will not get to the end of our second paragraph in this week’s reading.

In our first paragraph, Gen 6:9-12, we know it is a single paragraph because of the paragraph division – but at first glance it does not seem to contain one unified topic, but rather, two separate topics: details concerning Noah, and a repeat of the narrative on the wickedness of the earth.
It is when faced with paragraphs like these, when it is not readily apparent what the topic is, that the teaching tool of the paragraph divisions gives us the most help. The paragraph division assures us that these four verses are together in the order they are, for a reason – God has placed not only every word deliberately in Torah, but every letter as well.
When I outlined this paragraph, the first thing that jumped out to me is the contrast that exists between righteous Noah and the corrupt earth. They are opposites. I realized that God has used contrast as a teaching tool of Torah before: there was a contrast between Cain and Abel in Gen 4, and a contrast between the descendants of Cain who did what was right in their own eyes, and the descendants of Seth, who walked with God, in Gen 4 and 5.
The contrast between righteous Noah who walked with God, and the corrupt earth is the topic of this parsha, in fact. God is making a distinction between the two, and drawing attention to the distinction by putting these four verses together in a single parsha.
There is another clue that the contrast is what God wants us to see. Note in verse 12, it says, “for all flesh had corrupted their way on the earth.” In the Hebrew, the pronoun “their” is singular: all flesh had corrupted his way on the earth. It is as if God is comparing the singular man, Noah (vs. 9) with the singular flesh (vs. 12).
It is also said of Noah in vs. 9 that he “walked” with God. We learned last week that this word is halak, and it means to walk a revealed path, to walk a lifestyle as a journey through life. As it is said of Noah that he walked a certain way, it is also said of all flesh that he walked a certain way (vs. 12): “all flesh had corrupted his way on the earth.”
This word is derek, Strong’s H1870, the dalet – resh – kaph, and means the action of going or walking, hence a journey which anyone takes, thus a course of life. It is a different word from halak, but means essentially the same thing. Noah walked with God, while all flesh walked with – well, we are not told, but the implication is that Noah’s righteousness was a result of his walk with God, while the earth’s corruption was a result of his walk in his own way.
The result of the corruption: God sent the floodwaters on the earth, so that all flesh died that moved on the earth: birds and cattle and beasts and every creeping thing that creeps on the earth, and every man. All in whose nostrils was the breath of the spirit of life, all that was on the dry land, died (Gen 7:21-22). But Noah, and those who were with him in the ark, remained alive (Gen 7:23).
Lesson one: there are two ways to walk, and only two: with Him, and not with Him. And if one is not walking (halak) with Him, then one is walking in the corrupt way (derek) of the flesh, however good it might appear on the surface.
Lesson two: man can choose to walk with God or not. It is up to us, not up to Him. He has defined a path which is His path, and if we choose to walk on it, then we are walking with Him. The definition and boundaries of His path are unchanging and immovable. The definition and boundaries of His path are not up to us! Those are up to Him. His path is His will (Mat 7:13-14, 21-23).
Lesson three: there is a destination and an end result of the path we choose to walk, and the end is either life or death. Those are the only two ends. “There is a way (derek) that seems right to a man, but its end is the way (derek) of death,” (Pro 14:12).
Finding Messiah in Torah
Whenever we see in Torah, a situation of certain death, in which a miraculous deliverance results in either the preservation of life or the restoration of life, we have just seen the Torah theme of life from death; i.e., resurrection! The picture of resurrection is the picture of Messiah, for He told us that He is the resurrection and the life (Joh 11:25)!
In fact, every nature and science museum in the world is declaring witness with a loud voice to all mankind that God judges sin, but in Messiah is the resurrection and the life. For they are filled with the fossils of all manner of animal and plant life, which were laid down with great amounts of sediment by water, and they have been found on every continent, including mountain tops. These fossils declare that what was once living came to their death violently and catastrophically by a worldwide flood which covered the tops of the mountains (Gen 7:20); but that humans exist to view them in science museums testifies that one family was preserved alive through judgment.
Jesus Christ is the ark, and He is the open door (Joh 10:9). If we enter through Him while there is time, we will be saved, but if we enter not, we will likewise perish. For judgment for sin will come, and even though God delay, as we saw with the long lifespan of Methuselah, He will not tarry forever.