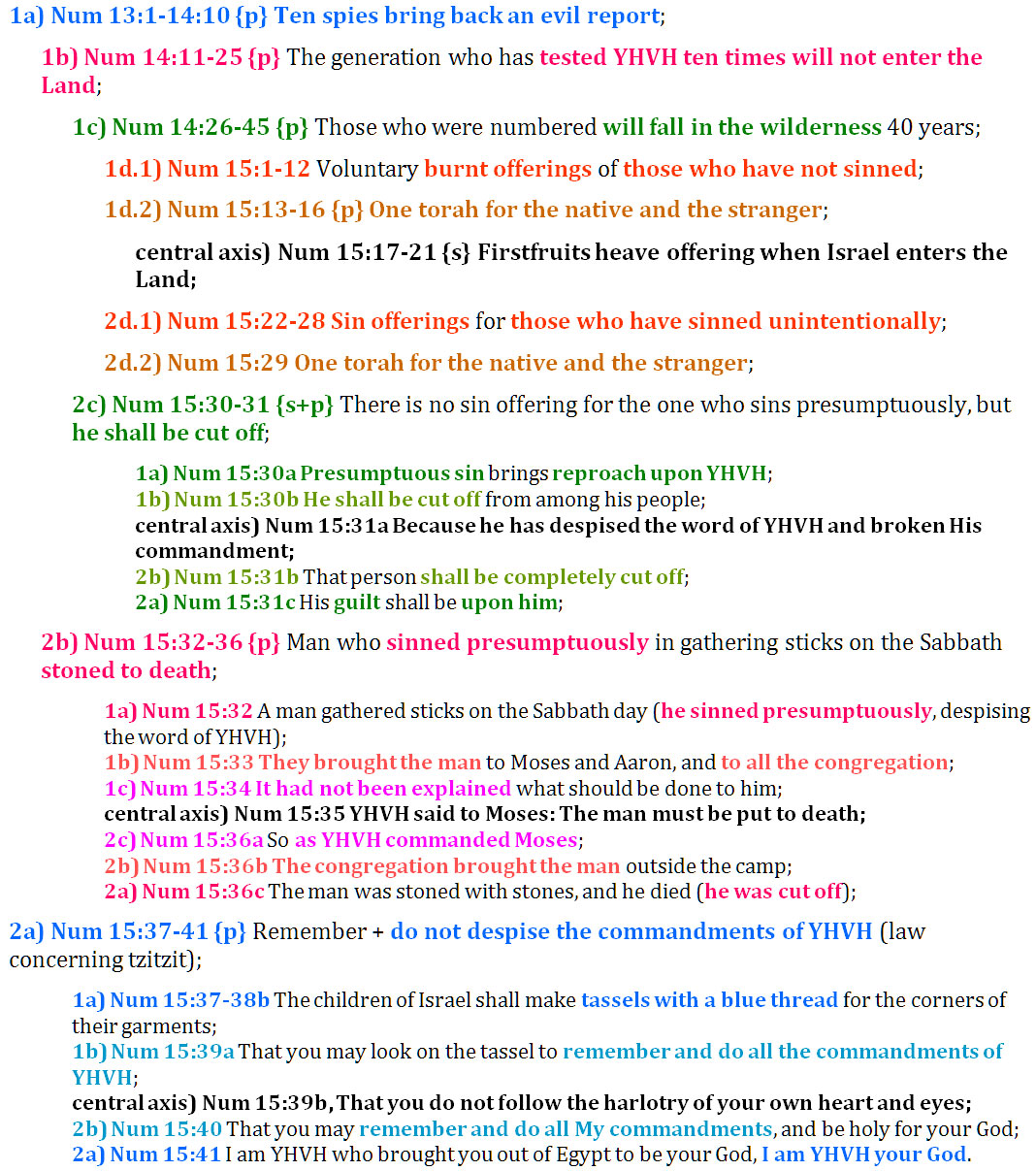 In order to understand why this parashah forms this chiastic structure, we have to understand the back half of the structure, and the distinction between the unintentional and the presumptuous sin first.

The Lord seems to be saying that certain sins will not be forgiven, which goes against what we have all been taught from the New Testament. But I believe this is another instance, as in most places in Exodus, Leviticus, and Numbers where someone dies as a result of sin, of the Spirit preaching the gospel of grace in Messiah Yeshua from Torah — because the New Testament clearly teaches that the wages of sin is death (Rom 6:23). If death was not the result of sin, then there would be no need of a Savior. Paul got this idea from the foundation of Torah.

The one who sins presumptuously is the one who despises the word of the Lord:

1b) Num 15:29 There shall be one law both for the native and the stranger;

central axis) Num 15:30a But the person who does anything presumptuously;

1a) Num 15:30a Presumptuous sin brings reproach upon YHVH;

central axis) Num 15:31a Because he has despised the word of YHVH and broken His commandment;

If we despise the written commandments we are also despising the Living Word made flesh, for the written commandments are the shadow cast by Him (Col 2:16-17). The man who rejects God’s Word rejects Messiah Yeshua, and also rejects salvation by grace through faith. His presumptuous sin is coming from a heart that reproaches the Lord and despises His word. He shall die (be cut off) and his guilt shall be upon him, as Rom 6:23 teaches.

But for the one who does not haughtily make a practice of disobedience, but who reverences the Lord and who respects the written and Living Word, who has a circumcised heart toward YHVH, that man avails himself of the offering for sin (Messiah Yeshua) and atonement shall be made for him, and his sin shall be forgiven.

Now this very interesting section on voluntary offerings (which can only be brought by the man who has not sinned) and sin offerings (which must be brought by the man who has sinned unintentionally, i.e., mistakenly, without haughty malice or contempt for the Lord or His Word) is followed by the man who was found gathering sticks on the Sabbath day and stoned. Why was this man not allowed to bring a sin offering, and atonement made for him, and his sin forgiven? Because he did not sin unintentionally, he sinned presumptuously, as the 2B pair reveals.

I think the man had the attitude, that since he was going to die in the wilderness anyway and not enter the Promised Land, of “Forget You, God, and forget Your Commandments! Here is what I think of Your commandments — I am going to go out and intentionally labor on the Sabbath (I am going to thumb my nose at You!), because I am mad at You and Your ‘unjust’ decision to keep us in this wilderness.” The circumcised heart toward YHVH does not have that attitude.

Then the end of the parashah is the first appearance of the Law of the Tzitzit, the 2A pair. Tassels were worn by other cultures in the ancient world besides the Hebrew culture. This interesting archaeological discovery reveals that the colors of the thread in the tassels identified which master the wearer served or to which tribe the wearer belonged. So 1a, put a blue thread in your tassel, pairs with 2a, I am the Lord your God, because the blue thread identifies the child of Israel as belonging to the Lord God. He is God therefore He has the right to give commands; the child of Israel is of the family of God and has the responsibility to remember and do his Father’s commands.

Now we can understand the pairs in the larger structure better:

The 1A Num 13:1-14:10 chiastic structure is here. In 1A, Israel was commanded to enter the Land, but ten of the twelve spies did not remember the Word of the Lord (I will surely bring you in) to obey it, but despised the Word of the Lord (we are not able to go in, we will be consumed). In 2A, the Lord commands those who are His to put the symbol of His authority on their garments, so that they will remember and not despise His Word, to obey it.

In 1B, the generation who tested the Lord ten times is cut off from the Land. They will die in the wilderness. In 2B, the man who sinned presumptuously by gathering sticks on the Sabbath, was cut off from Israel, and died outside the camp.

In 1C, the Lord will no more ignore the complaints and testings of Israel, but those who were numbered will wander 4o years and fall in the wilderness. In 2C, there is no sin offering or forgiveness for the one who sins presumptuously, but they will be cut off.

The D pair is obvious and without it acting as a beacon the rest of the structure could not be uncovered.

Now why is the reminder of firstfruits the central axis? This reveals the Lord’s heart of grace! The congregation had just received the bad news that they were not going to enter the Land. The Lord follows this by instructions concerning the harvest and produce of the Land when Israel enters in to it! It is Torah’s way of extending hope in the promise, that though delayed, Israel will enter her Land! ♥