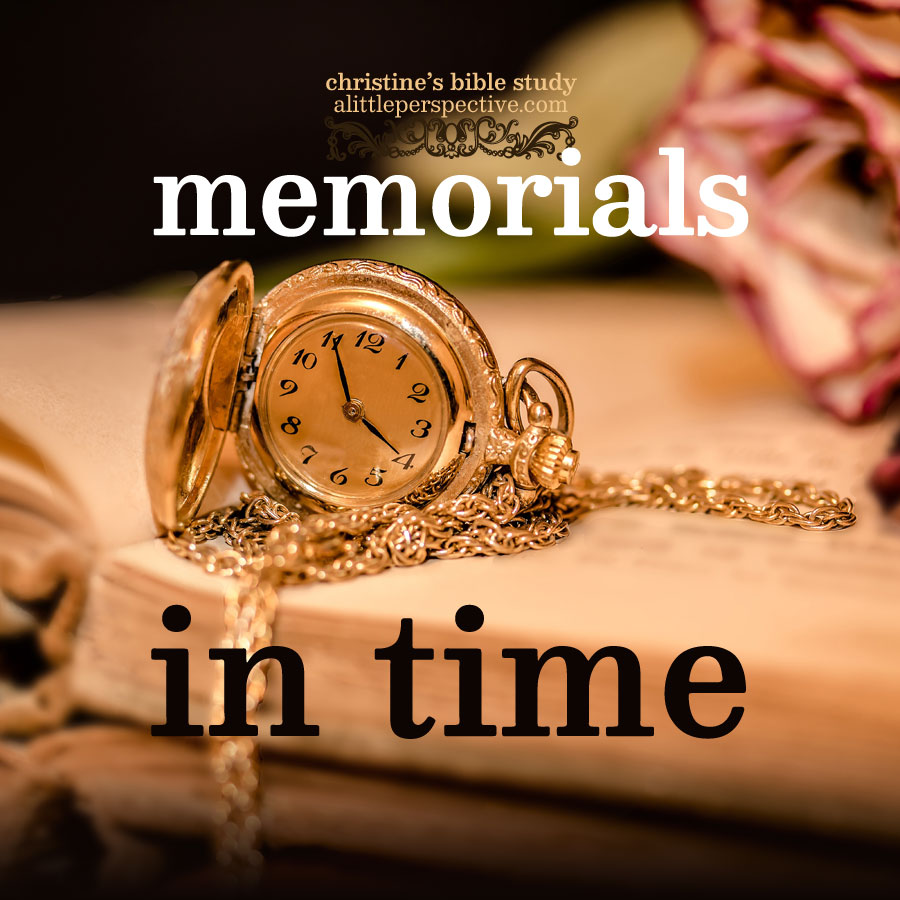 It was Memorial Day earlier this week, and I have been thinking about memorials since the weekend; the things we do as individuals and as a nation to make sure we never forget the things that are vital for us to remember.

We make memorials of places – like Independence Hall in Philadelphia, where the Constitution was drafted, debated, and approved – and we make memorials in time – like July 4th, the date the Declaration of Independence was signed and published. The Lord is the same; He makes memorials of places and times also, whose purpose is to make sure we never forget something vital for us to remember.

An example of a memorial of place which the Lord established, would be Temple Mount in Jerusalem. On that spot, Abraham nearly sacrificed Isaac in obedience to the Lord, foreshadowing by type that one day the Father would sacrifice His Son of the Promise to free His people from their sins. Also on that spot, when David interceded for the people of Jerusalem, a deadly pestilence was stayed from proceeding further (another foreshadow of deliverance from death through the ministry of Messiah, of David’s house). And Solomon built the Temple, the place where the name of the Lord dwells forever — yet another foreshadow of the Messiah, the Son of David, building the Temple without hands where God Himself will dwell with His people forever!

Every Sabbath and feast day is also a memorial in time which the Lord has established from the foundation of the world. They remind us of important historical events which we cannot afford to forget, which foreshadow future realities. The Sabbath reminds us that God is our Creator and Lord, and that we owe Him worship and service — Creation Week is the historical event. But it is also a promise that the millennial reign under the kingship of Messiah will be a millennium of rest — that is the future event, as Messiah’s millennium will be the 7th millennium in the history of the earth.

The memorial in time coming up this weekend is a very important one indeed, but it seems to get lost between the big spring festivals of Passover and Firstfruits, and the big fall festivals of Trumpets and Tabernacles. Sunday May 31st is Pentecost, or Shavuot. It is the second of three harvest festivals in Israel. Firstfruits is the first harvest festival of the new year, when the barley comes ripe. The barley is the first “fruit” to rise from the dead of winter, you might say; just as Jesus is the firstfruits of those who rise from the dead. Tabernacles is the third harvest festival, when the fruits such as olive, grapes, and figs come ripe. Tabernacles is the largest harvest festival, the one that closes the agricultural year; and the large harvest of its fruits of all kinds is like the abundance of the nations which will come in faith in Messiah at the very end, at His return.

And then there is Pentecost, or Shavuot, sitting off by itself in between the two. The wheat is harvested at this time in Israel. On this day in history, moreover, God gave the two tablets inscribed with the Law to Moses from the top of Mount Sinai; and it was also this day, when the Holy Spirit was poured out onto the Church in Acts chapter 2. God linked together forever the giving of His Law and the giving of His Spirit by the memorial in time of Pentecost. I believe it is because Ezekiel says:

“Then I will give them one heart, and I will put a new spirit within them, and take the stony heart out of their flesh, and give them a heart of flesh, that they may walk in My statutes and keep My judgments and do them; and they shall be My people, and I will be their God.” Eze 11:19-20

Because it is only by the indwelling of the Spirit of God, by the new man with a circumcised heart, that God’s people can walk in His statutes and keep His commandments and do them.

So what is the spiritual harvest that the wheat harvest festival of Shavuot or Pentecost foreshadows? I believe it is us. We are the harvest, we have been born again with new life, for the life we now live, we live by faith in the Son of God, who loved us and gave Himself for us. We are the ones between: we are between the resurrection of Jesus Christ the Firstfruit, and the realization of the great harvest which will come in for God at His return. We are between worlds, because we live in this world but are not a part of this world. We are between realities, with our dead flesh constantly at war with our born again spirits.

For the Lord your God is gracious and merciful, an

May Yehovah give you increase more and more, you a

The 12th month #NewMoon is expected TONIGHT! Get o