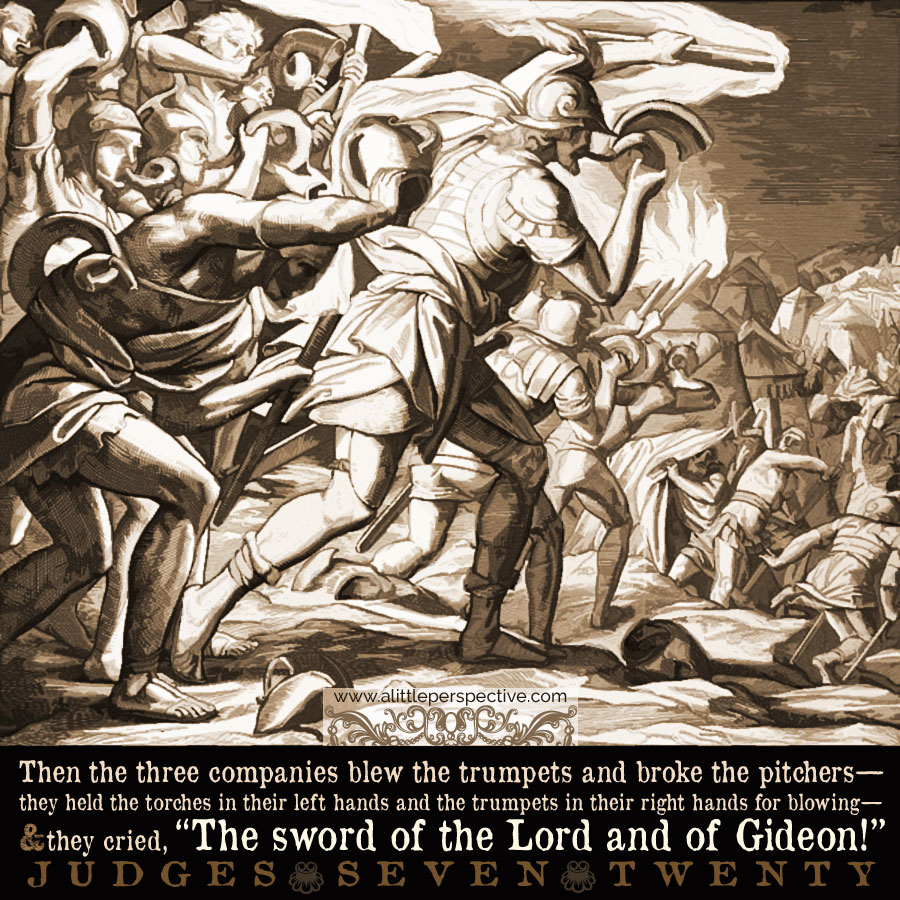 Read Judges 7 and 8 at Bible Gateway.

Now the first thing that leaped out to me today was, why would the position of Gideon’s camp merit a single paragraph all to itself? God does these things for a reason. Gideon is referred to by his name, “Gideon,” through most of the narrative, but here and at the end of chapter 8, his name his father gave him, Jerubbaal, is mentioned specifically.

‘Gideon’ is Strong’s H1439, and is from the root that means, to hew, to cut down, to chop down, as a woodcutter, but also used in Scripture as a warrior who cuts down men before him.

Jerubbaal is Strong’s H3378, and is a compound name from the root that means, to contend, so “with whom Baal contends.”

Gideon contended with Baal when he cut down his altar and cut down the Asherah pole that stood beside it. So isn’t it interesting, that when Gideon was named by his parents, his name was like a prophecy of what God would do through him in his life. He hewed down the altar of Baal, and he hewed down the Midianites who had oppressed Israel.

When the Angel of the LORD appeared to Gideon when he was threshing wheat in the wine press, and hailed him O mighty man of valor, He was agreeing with the prophecy of his name which he had borne his whole life! Perhaps this is why Gideon’s father was so quick to accept the overthrow of Baal’s altar, likewise seeing the fulfillment of his name in it.

Now the Scripture brings out, by the Hebrew paragraph division, that the one who contended with Baal and prevailed (Jerubbaal), that is, he who hews down (Gideon), was preparing his army before the Midianities. In a way, Scripture seems to be saying, that first Gideon prevailed over the spiritual powers of wickedness, who are less than nothing in the face in YHVH, in preparation for prevailing over the men who worshiped that spiritual power.

The strong theme from Jud 7:1-8 {sx3+p} is preparing the army by pruning out the fearful. The root verb of ‘Gideon’ can also mean, to prune, in an agricultural sense. God helped Gideon prune the fear from the army. That the 300 crouched to drink, means they did not drop their guard or mental preparedness for the battle even when stopping to drink. The 9,700 who knelt to drink, while not afraid of the enemy, did drop it, even if only for a moment to drink.

When Lord routed the Midianites, Gideon called upon Ephraim, who he had not previously called, to help chase down all those who were fleeing back East from whence they had come. Gideon and his army crossed the Jordan in pursuit, and the two towns who did not relieve his army, Succoth and Penuel, were on the east side of the Jordan in the territory of Gad. They may have followed a traditional ancient route from the East into Canaan, for Penuel, and then Succoth, was the route Jacob took to return to the Land after his service to Laban for his wives and his flocks.

Now, the ephod. A gorgeously made ephod was worn by the high priest as he performed his tabernacle duties. It was like a vest worn over a floor-length robe of blue. The breastplate containing the gemstones of the twelve tribes of Israel, was attached to the ephod by golden chains. Within the breastplate was the Urim and Thummim, through which the high priest inquired of the Lord. What they were, and how it worked, we are not told, and I think it would be wise to not conjecture either. I believe Gideon made a golden ephod as a memorial of his victory over the Midianites, for Hebrews were forbidden to make images. He might have thought an image of a garment did not transgress the command. Why an ephod? Good question. It might be that because the Lord spoke to Gideon, the memorial was of the thing through which the Lord spoke to the high priest. At any rate, it was not the wisest thing to do; none of the previous judges of Israel had done anything like it, even though they had also won great victories, and it proved to be a snare (of idolatry) to Gideon’s house afterwards.

All that is to say, God uses imperfect people to accomplish His perfect plans! Aren’t you glad? ♥