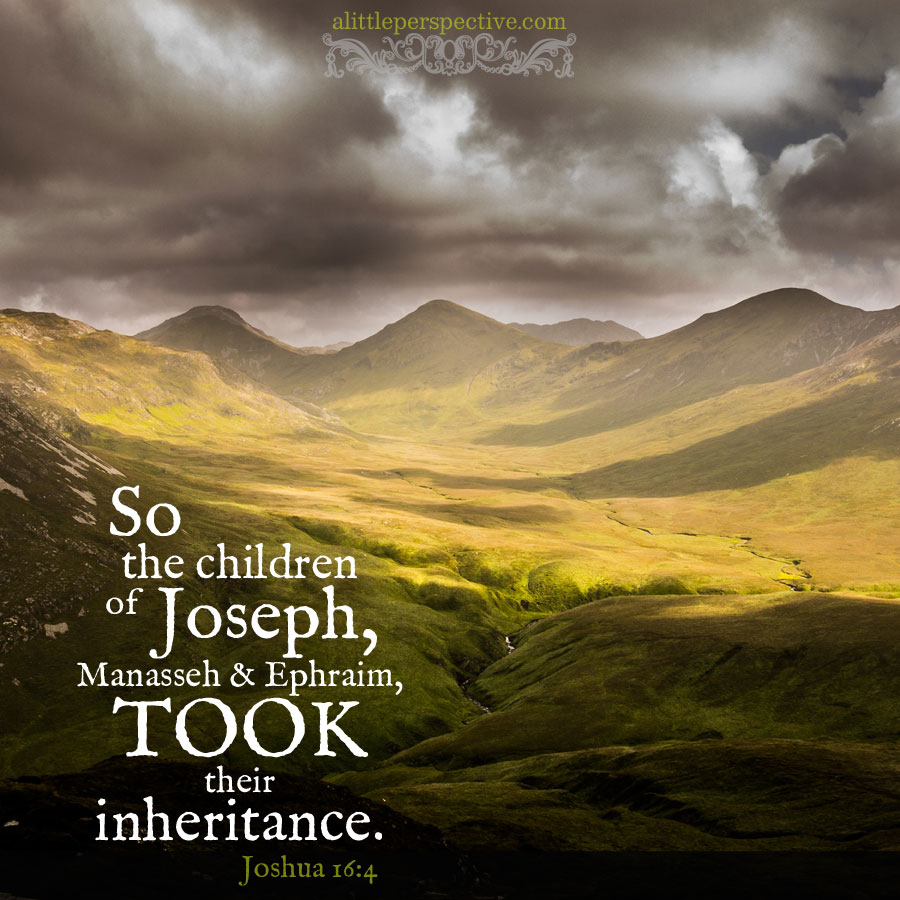 Read Joshua 15 through 17 at Bible Gateway.

Here are the two sons of Israel again, Judah and Joseph, who receive their inheritance first among the 9-1/2 tribes who have yet to receive it. Scripture continues to highlight Judah and Joseph together for a reason, since there is no idle word in Scripture!

Notice that in Judah’s inheritance, the land was given to Judah by the LORD, first of all, and then by Joshua. But Canaanites still dwelt in their possession. The Anakim were in Caleb’s possession (Jos 15:14), the Philistines were in Ekron, Ashdod, and Gaza (Jos 13:2-3), which was given to Judah (Jos 15:45-47), and the Jebusites were in Jerusalem (Jos 15:63).

In Joseph’s inheritance, the Canaanites remained in Gezer, which belonged to Ephraim (Jos 16:10), and the Canaanites remained in the three hilly regions where Megiddo was located, even though this land belonged to Manasseh (Jos 17:12). Moreover, Joshua gave Joseph even more land in the forest country, among the Perizzites and the giants (Jos 17:15).

So the land, these cities, belonged to Israel, on the authority of the Creator of heaven and earth, however, giants, Canaanites, and Philistines were determined to remain there! In order for Judah and Joseph to dwell there in peace, they had to dispossess the giants, Canaanites, and Philistines who were not willing to be dispossessed! Even so, the LORD was urging them to take what was rightfully theirs, and not to fear them, for He was with them, and He was the one who would dispossess them before Israel.

Have giants lodged in your inheritance? Do you have a promise from the LORD, that “Canaanites” are determined to keep from you? Reading through these chapters this time around, reminded me that giants remained in mine. God did not twang the Canaanites with His fairy godmother wand and make them all disappear before the children of Israel, as much as He wanted them gone, nor is He going to twang my giants with His fairy godmother wand, and make my giants disappear. I am going to have to go up, strong and courageous because the LORD is with me, and not fear to possess my possession, but take it, using my two-edged sword of the Spirit which is the Word of God, and my shield of faith, and make those giants leave my inheritance. And so are you. ♥