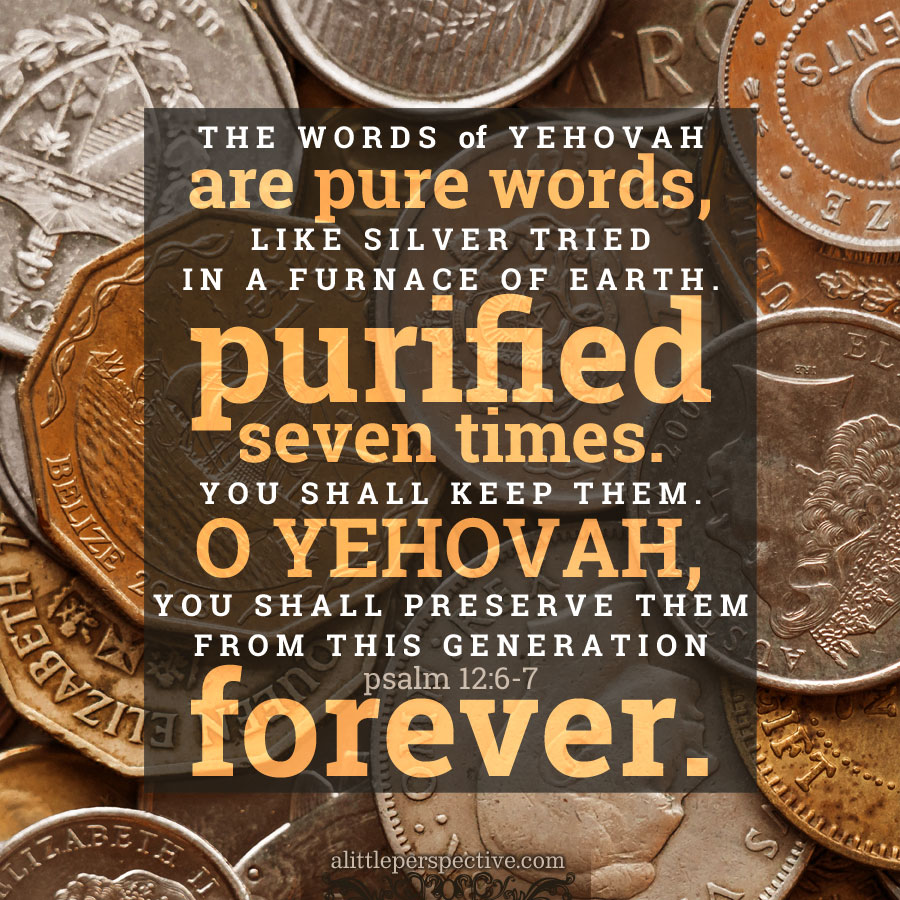 Today’s Old Testament chronological reading is in Job 11 and 12.

The Psalms/ Proverbs reading is in Psalm 12.

The words of YHVH are pure words, {n} as silver tried in a furnace of earth, purified seven times. You shall keep them, O YHVH, You shall preserve them from this generation for ever. Psa 12:6-7

Men are not the only things which endure testing. YHVH’s words are tested as silver is tested in a furnace of earth, so that they are purified seven times. The analogy is this: when gold or silver ore is taken from the earth, other elements are bound to it in the rock. It’s a mixture. The ore is put in a furnace and heated to a high degree. As the silver or gold liquifies, the heat breaks the chemical bonds between the silver and gold, and the other elements mixed with it. Everything “other” that was mixed with it, is called dross, and when the liquid ore is hot enough, the dross rises to the surface where it is skimmed off.  What is left is elementally pure silver or gold. Now the pure molten silver or gold can be poured into ingots or used to make valuable items.

When men are tested, that is when the word of God is also tested. A lot of people talk a good talk, but do they walk a good walk? Testing reveals what is true. This is a universal principle: repeatable experimentation is the bedrock of science, and cross examination of witnesses is the bedrock of the courtroom. A test is not necessarily a set of bad circumstances. It can be merely a situation where one must choose to believe, or speak, or do what is right. The man undergoing a test must put his faith in the words of God, that is, test them, like a man putting his weight on a high bridge he has not crossed before. When the bridge holds him, he has proved it to be a sturdy structure. But how interesting that the Hebrew word translated tried, tells the parable of smelting silver ore.

One cognate word from this verbal root is prison, the place that contains or holds (tet) the man (resh). The purpose of the prison is to either purify society from lawbreakers, by removing them, or purify the criminal from lawbreaking, by removing his freedom and hopefully cause him to reflect on why he is there; so that he leaves off folly and gains wisdom.

Psa 12:6 tried Strong’s H6884 צרף tsaraph a primitive root meaning, “to smelt a metal,” that is, to purge gold or silver (of the dross which is bonded in the ore) by fire. The 3-letter root is tsadey + resh + pey.

The story: To cause that which is concealed (tsadey) to rise to the top or surface (resh), so that it may be blown away or dispersed (pey).

Psa 12:7 keep Strong’s H8104 שמר shamar, a primitive root, “to keep, to watch, to guard as a husbandman or shepherd.” The 3-letter root is shin + mem + resh, however the Ancient Hebrew Lexicon tells us that the shin + mem in this root were originally a sin + nun, the similar sounds becoming transposed over time:

(As for Job, Zophar chastises him in chapter 11, and Job replies to Zophar in chapters 12-14, so look for that discussion tomorrow.) 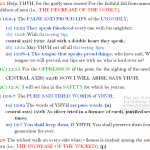