You are here: Home / Bible Study / applied word / isis and the resistance of evil 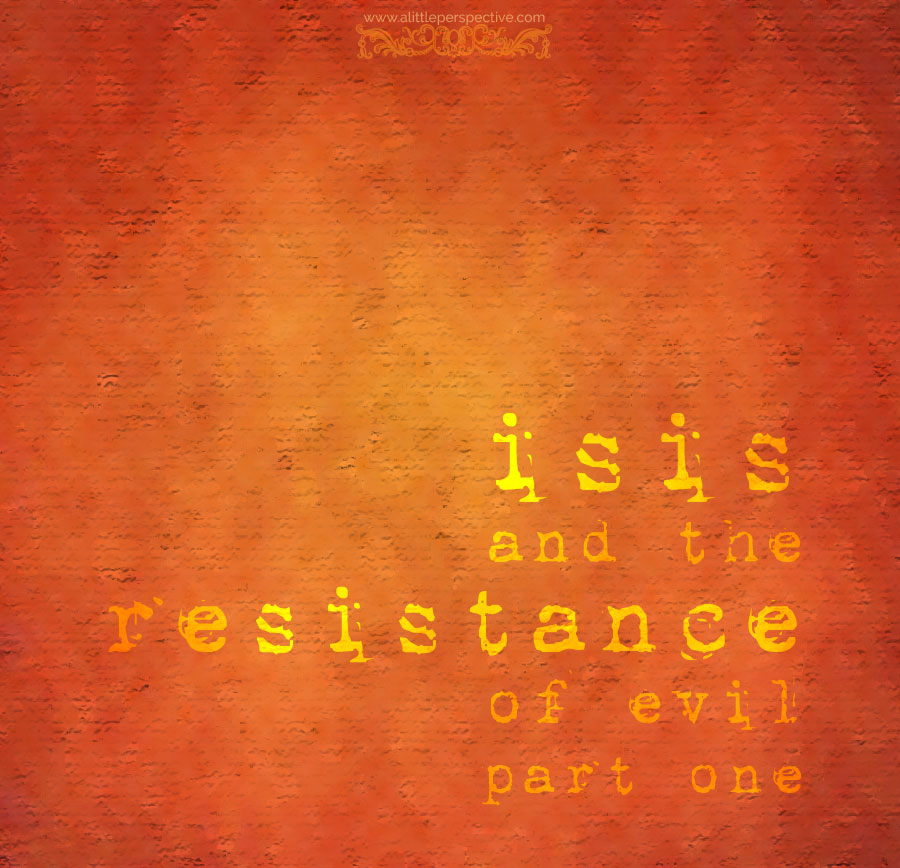 I took part in an interesting discussion last week. The news had just broken that ISIS was beheading Christian children in Iraq. Most of us were lamenting that the United States pulled troops out of Iraq too quickly, before the state was stable enough to provide for its own defense. Some, however, were horrified that followers of Jesus advocated resisting a group like ISIS with military force. The contention was that since, in the Garden of Gethsemane:

But Jesus said to him, “Friend, why have you come?” Then they came and laid hands on Jesus and took Him. And suddenly, one of those who were with Jesus stretched out his hand and drew his sword, struck the servant of the high priest, and cut off his ear. But Jesus said to him, “Put your sword in its place, for all who take the sword will perish by the sword. Mat 26:50-52

Jesus said that all who take the sword will perish by the sword, the only biblical resistance we can offer to the actions of ISIS was to pray for them. That if we use force to prevent the beheading of innocent children, then we are not walking in love and have let the devil win our hearts.

I know this is a deeply- held belief for some, so what does the Bible say about resisting evil?

“You have heard that it was said, ‘An eye for an eye and a tooth for a tooth.’ But I tell you not to resist an evil person. But whoever slaps you on your right cheek, turn the other to him also. If anyone wants to sue you and take away your tunic, let him haveyour cloak also. And whoever compels you to go one mile, go with him two. Give to him who asks you, and from him who wants to borrow from you do not turn away.” Mat 5:38-42

If we read this passage carefully, we see that Jesus is instructing us how to react to someone who was mounting a personal attack. I heard Paul Washer famously say during a sermon, that he was always careful when taking his wife on missions in South America, for if he himself was captured, and was beaten up and slapped around, that was nothing, he would endure it without a thought. But if his wife was captured, and someone dared to even touch a hair on her head, he would be compelled by the Scriptures, and by love, to lay down his life in her defense.

So then, this raises an intriguing question. Do the Scriptures, while charging individuals to turn the other cheek when personally attacked, charge authorities to resist evil when those who are under their authority and protection are attacked?

I believe it does:

A second line of argument went like this: we cannot know what is good and evil, only God can judge what is good and evil (the implication being, He has declined to share His judgment with the human race). Therefore we cannot be taking up the sword against “evil,” because we have no idea if we have defined evil rightly.

But the above passage in Romans presupposes that rulers, as God’s ministers, do know what the difference between good and evil is, for they are to praise what is good while executing wrath on what is evil. But this is not the only place in the New Testament to confirm that good and evil works are discernible:

Likewise, the good works of some are clearly evident, and those that are otherwise cannot be hidden. 1 Tim 5:25

This is the favorite verse in the whole Bible of the unrighteous. But in just a few verses on, Jesus tells us to judge the actions and behavior of others (“You will know them by their fruits,” vs. 16.) Is He contradicting Himself? No! The meaning of the word in the original language, is to condemn not, that you be not condemned. In other words, we can and must judge fruit, actions and behavior, whether the works are good or evil (there is that pesky reiteration from Scripture that good and evil can be known and recognized); but we are never to judge the thoughts and intentions of someone’s heart so as to condemn them (pass a judgment on their eternal destination), because only God can judge the thoughts and intents of the heart (1 Chr 28:9).

Please see matthew 7, judge not, for a further discussion on this topic.

So much for those in authority. Governments and judges not only must know God’s biblical definition of good and evil, right and wrong, which He revealed to mankind in the books of Moses, but they must act to protect those under their authority when the evil begin to exercise wickedness against the innocent and vulnerable.

So then what is the church’s responsibility? isis and the resistance of evil, part two