You are here: Home / Perspective / books and poetry / history of the preservation of the biblical text 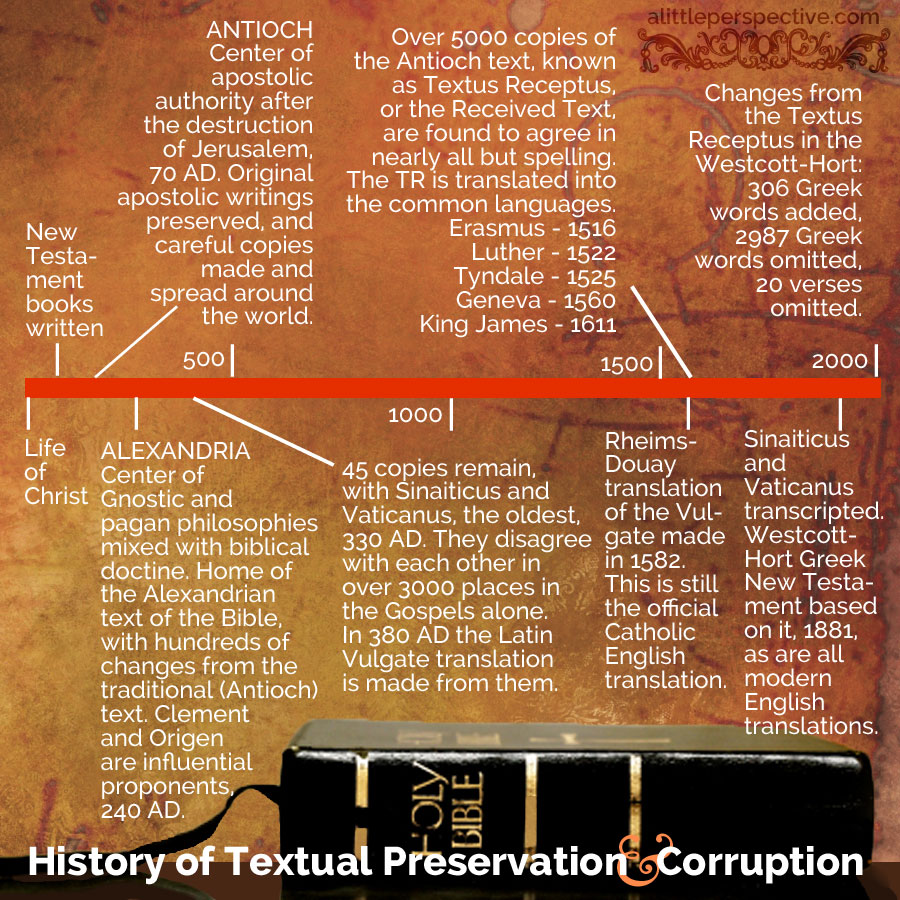 I have the Masoretic Hebrew text of the Old Testament, and the Textus Receptus text of the New Testament in my library, for the day when I have learned enough Hebrew and Greek to read the Scriptures in their original languages. But for now, while I must use an English translation, I use either the KJV, the JPS (Jewish Publication Socieity), or NKJV in my Bible studies. I am not a rabid KJV only fanatic. However, there is no denying that there is a definite and verifiable history of the preservation of the original text of Scripture.

Two heretics: Clement (150-215 AD), and Origen (184-253 AD), theologians in the Alexandrian school, who did not adhere to what we would recognize as standard Biblical doctrine, and who championed the creation of a modified Alexandrian text;

The [Vaticanus] manuscript became known to Western scholars as a result of correspondence between Erasmus and the prefects of the Vatican Library. Portions of the codex were collated by several scholars, but numerous errors were made during this process. The Codex’s relationship to the Latin Vulgate was unclear and scholars were initially unaware of the Codex’s value. This changed in the 19th century when transcriptions of the full codex were completed. It was at that point that scholars realised the text differed significantly from the Textus Receptus. Most current scholarship considers the Codex Vaticanus to be one of the best Greek texts of the New Testament, with the Codex Sinaiticus as its only competitor. Until the discovery by Tischendorf of the Sinaiticus text, the Codex was unrivaled. It was extensively used by Westcott and Hort in their edition of The New Testament in the Original Greek in 1881. The most widely sold editions of the Greek New Testament are largely based on the text of the Codex Vaticanus. Codex Vaticanus, Wikipedia

Two textual revisionists: Brooke Foss Westcott (1825-1901) and Fenton John Anthony Hort (1828-1892), who published a revised Greek New Testament in 1881 based upon the newly transcripted Sinaiticus, and Vaticanus codexes, with over 3000 changes from the Textus Receptus Greek New Testament of Erasmus and the Reformers. Neither Westcott nor Hort accepted all the traditional Biblical doctrines. Westcott did not accept the Creation or Fall of Man, the miracles of Christ, nor His bodily resurrection and return. Hort did not accept the Creation nor the infallibility of Scripture;

But, two essentials: God has both inspired and preserved His Word:

All Scripture is given by inspiration of God, and is profitable for doctrine, for reproof, for correction, for instruction in righteousness, that the man of God may be complete, thoroughly equipped for every good work. 2 Tim 3:16-17

The words of the Lord are pure words, Like silver tried in a furnace of earth, Purified seven times. You shall keep them, O Lord, You shall preserve them from this generation forever. Psa 12:6-7

For more information on these matters please see:

Which Version is the Bible? Dr. Floyd Nolen Jones

How art thou fallen from heaven, O Lucifer, son of the morning!
… Yet thou shalt be brought down to hell.

However, the New International Version pens:

How you have fallen from heaven, O morning star, son of the dawn
… but you are brought down to the grave.

“Indeed, the New American Standard and all the modern versions read almost exactly like the NIV (except the NKJV). Yet historically Isaiah 14 has been cited throughout the Church as the singular biography and identification of Lucifer … In verse twelve of the King James, Lucifer is in heaven; in verse fifteen Satan is in hell, and continuing context establishes that Lucifer and Satan are one and the same being. The new versions have removed the name “Lucifer” thereby eliminating the only reference to his true identity in the entire Bible – yet the change in these versions is not the result of translation from the Hebrew language. [A discussion of the Hebrew follows].

“Moreover, Revelation 22:16 (also 2:28 and II Pet 1:19) declares unequivocally that Jesus Christ is the “morning star” or “day star” (II Pet. 1:19, cp. Luk 1:78; Mal 4:2), meaning the sun – not the planet Venus. … Thus it must be understood that the identification of Lucifer as being the morning star does not find its roots in the Hebrew O.T., but from classical mythology and witchcraft, where he is connected with the planet Venus (the morning “star”). … The NASV compounds its role as malefactor by placing II Pet 1:19 in the reference next to Isaiah 14 thereby solidifying the impression that the passage refers to Christ Jesus rather than Satan. …

“Among the modern versions, only the King James (and the NKJV) gives proof that Lucifer is Satan. Without its testimony this central vital truth would soon be lost. This fact alone sets the King James Bible apart from and far above all modern … rivals. … If the reader is not greatly alarmed by the above, it is pointless for him to continue reading. However, if concern has been aroused as to how this deception has been foisted not only upon the Christian Church, but on the general public as well — read on. The story lies before you.”

Old Light on the Roman Church by Bill Cooper, in particular Part Three: The Latin Bible:

“Part Three proceeds upon the proven assumption that the Word of God – the Bible as given in both the Old and New Testaments – is supremely trustworthy in all its shades and meanings, whether it speaks historically, linguistically, prophetically, doctrinally or in any other way. This inerrancy, however, is owned by the Bible only in its original autographs, be they Hebrew, Aramaic or Greek. As we shall see, it is all too possible to produce a purported translation of the Bible that perverts and misrepresents the meaning and words of the original autographs at certain crucial points and places, thus misleading the unwary reader into a false way of salvation. Such perversions of the Word are sometimes deliberate, sometimes inadvertent, but by the very nature of the subject, no translation – even the very best – can be entirely free of some fault or other. This is therefore not a nit-picking exercise. Rather, the subject of this present paper is a consideration of a certain calculated and deliberate perversion of the Bible, one that wreaked havoc in the church in its own day, and continues to do so more than 1600 years later.”

The Forging of Codex Sinaiticus by Bill Cooper

“Next only to the King James Bible, Codex Sinaiticus is by now perhaps the most famous (many would say infamous) book in the world. Its impact when it surfaced in the mid 19th century was immediate, and even today is powerfully felt in the world of Bible scholarship. That is because it is pretended to represent a version of our Bible which is quite unlike the Received Text, and is trumpeted abroad as representing the original text of the Bible before the Protestant church and its bishops got their political hands on it, changing it into the Bible that we know today. It is also wrongly claimed to be the oldest and the best manuscript of the Bible, representing a text to which all others – especially the Received Text – are to be referred. In other words, whenever Sinaiticus differs from the Received Text – which is shockingly often – then its readings are to be held superior to all others and preferred before them all. The impact of this upon Christian doctrine, and especially upon the question of the Bible’s integrity and Authority, has been immense, and it continues to shipwreck the faith of millions. So, where did this strange book come from? Who wrote it, and why? Under what circumstances did they write it? These are all questions which we come to answer in this examination of the subject.”

Why are the CFA pages in Leipzig University Library white, while the remainder of the pages, described in 1845 as “white,” are stained and yellowed with age?
Why has no chemical analysis or age testing of the inks or the parchment ever been done?
Why is the manuscript in such good shape for its claimed age of 1500-1600 years?

The objective of this website is to help find answers to these and many more questions about the true origin and history of Codex Sinaiticus by providing a home for images and other helpful resources and links that can help piece the puzzle together.

The New King James Version in the Great Tradition by Arthur L. Farstad

In 1975, the boldest, most extensive project in modern Bible publishing history began. 130 Bible scholars, pastors and communicators gathered with one goal in mind – to preserve the accuracy, authority and beauty of the King James Version while updating the language for modern readers. This book offers an insightful glance into the history of this event as only the Executive Editor, Arthur L. Farstad can tell. If you’ve ever thought that a room full of biblical scholars sorting through Hebrew and Greek was boring, then think again. Revealing the pain staking progress that each member of the committee made over the seven-year process, three distinct sections guide the reader through the purpose of the NKJV translation: Part One: Accuracy; Part Two: Beauty; Part Three: Completeness.