You are here: Home / Bible Study / eschatology (end times) / God is bigger than my box 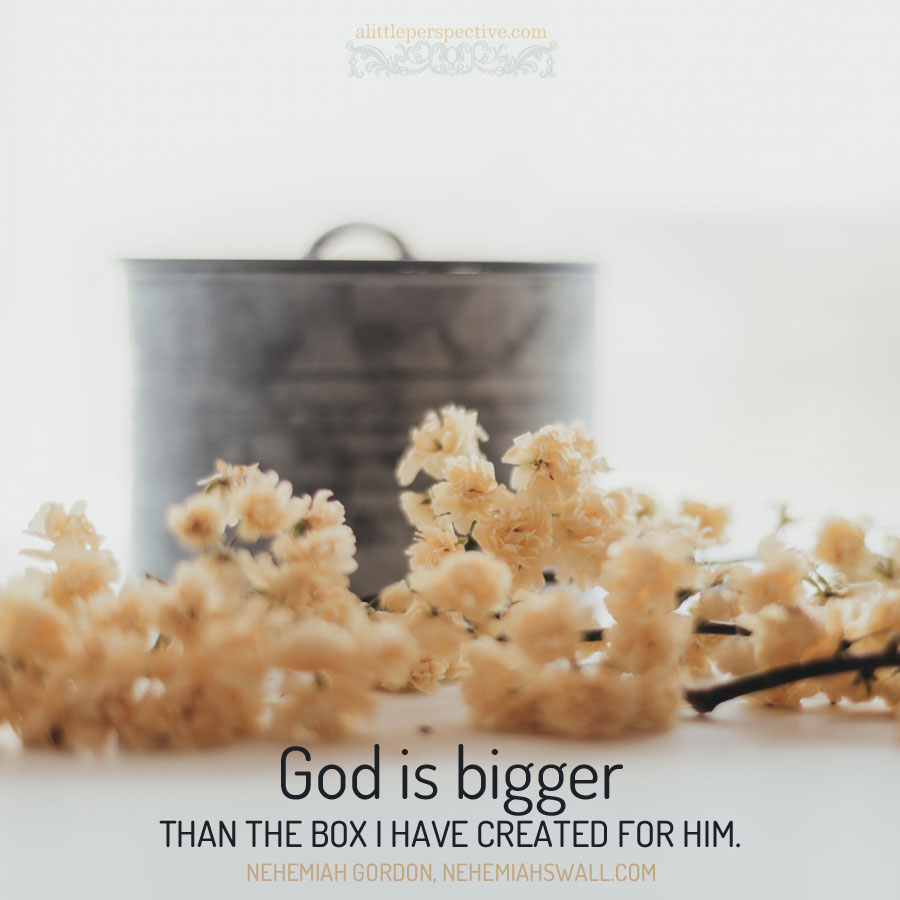 The Parable of the Wedding Feast
Neither Do I Condemn You

Nehemiah Gordon and Keith Johnson recently shared a video, Live, not from Quarantine, and in that video, Nehemiah tells story of Kialeecha (sp.) South Africa.

To summarize, on a ministry trip to South Africa, the morning they are to depart Cape Town, they become aware of a pastor of a small Christian church in Kialeecha, a dangerous (for whites) township on the outskirts of Cape Town. They arrive, and after introducing themselves, when the pastor heard that Nehemiah had lived in Israel, said,

“Stop. You lived in Israel? Do you speak Hebrew?”

The pastor shared, “About seven years ago I had a dream. And in that dream, I saw four letters. For seven years I have been waiting for someone to walk into my church who knows Hebrew, who can help me understand what I saw in this dream.”

When the pastor saw the four fiery letters, יהוה yud hey vav hey, on the cover of Keith’s book, he exclaimed, “That is what I saw, that is the four letters!”

It struck me. Here is this man who had a dream. In my upbringing, in my culture that I came from, God doesn’t speak to Christian pastors in dreams. Christian pastors have the wrong doctrine, the wrong theology, and what I was taught growing up was, they’re just in error. They’re at best, a heresy of Judaism, at worst, idolaters. And God does not interact with such people in dreams, He doesn’t relate to such people, they’re just cast out into the desert of nothingness.

And here was this man who had waited seven years for me to walk into his church. He’d had the dream, now I had the knowledge, but I didn’t have the dream. You’ve said this thing for years that I’ve known you (speaking to Keith):

There’s information, and inspiration. And when you combine them, you get revelation.

And I never knew what that meant, I just thought that was some cute thing that Methodists say on Sunday morning, and you were importing that into the teachings we were sharing. And here’s this man standing in front of me. He certainly doesn’t read Hebrew … and we’re communicating about these four letters he had in the dream, so he has the inspiration, but he doesn’t have the information. I’ve got the information, but I didn’t have the inspiration, I didn’t have that dream. And God knew that one day I would walk into that church, and I would be able to bring him the explanation of his dream, and together what went out from that was revelation.

And that changed my life, that event. Because I realized God is bigger than the box that I’ve created for Him. You know, I used to be the doorkeeper. I used to be the gatekeeper. People who came to me, I would question,

And if they didn’t fit the bill, I would say, REJECTED. And I realized, I was putting God in a box. And God was bigger than the box that I had created for Him, and I decided, there going forward, that I was going to let God be God.

With the very outcasts of society that we are called to bring in to the wedding feast, the uninvited from the highways and byways, let us not put God in a box of our own creation. Let us not reject the outcasts who do not fit our list, but who nevertheless God is calling to the wedding feast.