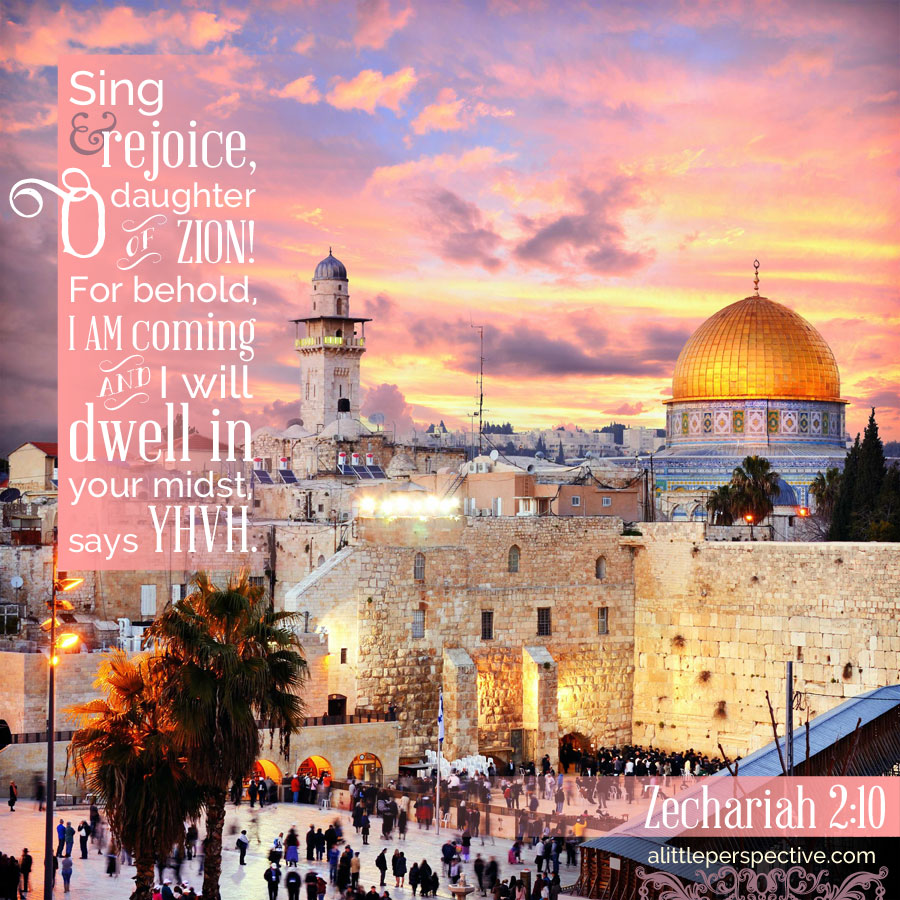 Read Zechariah 1 and 2 at Bible Gateway.

Zec 1:1-6 {s} Return to Me and I will return to you, do not be like your fathers who would not heed
Zec 1:7-17 {s} The vision of four horsemen who patrol the earth: YHVH will again comfort Jerusalem
Zec 1:18-19 {s} The vision of four horns, who have scattered Judah, Israel, and Jerusalem
Zec 1:20-21 {s} The vision of four craftsmen, who terrify the four horns, to cast them out
Zec 2:1-5 {p} The vision of the man with the measuring line, to measure Jerusalem/ YHVH a wall of fire around her
Zec 2:6-7 {s} Come out from Babylon, for I have spread you abroad like the four winds of heaven
Zec 2:8-9 {s} He has sent Me to the nations which plunder you, the apple of His eye/ they shall become plunder
Zec 2:10-13 {s} Rejoice Zion, for YHVH is coming to dwell in you/ many nations joined to YHVH in that day

1a.1) Zec 2:4-5a, Jerusalem inhabited without walls/ YHVH will be a wall of fire around her (YHVH’s defense);

central axis) Zec 2:6b, For I have spread you abroad like the four winds of heaven, says YHVH;

2a.1) Zec 2:8-9, YHVH will go after the nations which plunder Jerusalem/ they shall become plunder (YHVH’s offense);

1a) Zec 2:8a, For thus says YHVH of hosts: He sent Me after glory;
1b) Zec 2:8b, To the nations which plunder you;
central axis) Zec 2:8c, For he who touches you touches the apple of His eye;
2b) Zec 2:9a, For surely I will shake My hand against them/ they shall become plunder for their servants;
2a) Zec 2:9b {s} Then you will know that YHVH of hosts has sent Me;

Then I raised my eyes and looked, and behold, a man with a measuring line in his hand. So I said, “Where are you going?” And he said to me, “To measure Jerusalem, to see what is its width and what is its length.” Zec 2:1-2

There are only a few places in Scripture where an angel appears in a vision to a prophet, with a measuring line or a measuring rod:

In Eze 40-42, especially, an angel appears with a measuring rod to measure the dimensions of the temple that Ezekiel is seeing;

In Rev 11 and 21, John also saw an angel with a measuring rod in connection with the temple and Jerusalem.

The old Bible commentators equated the visions of the measuring lines with God’s people examining their worship and practice, to see if it measured up with the pattern that He had established for His worship. They saw these visions, not necessarily as God’s people being given a new blueprint, but a call to return to the eternal blueprint established by the mouth of the LORD for His worship and service, which He gave to Moses on Mt. Sinai.

Each of these instances of the measuring line do in fact take place at a time when the LORD’s worship has been destroyed: Ezekiel’s vision came while the Jews were in exile in Babylon, and the temple in Jerusalem had been destroyed by Nebuchadnezzar. Zechariah’s vision came while a remnant of the Jews had returned to Jerusalem, and who had begun to rebuild the temple, but had halted in the work, as we have seen. And John’s vision of the temple came when he was in exile on Patmos, which we know through early church history to have been during the reign of Domitian, so 81-96 AD. As the second temple was destroyed in 70 AD, so John saw his vision when the temple was also destroyed.

John’s vision gives us a clue, as he sees the New Jerusalem, which we assume by thematic connection, Ezekiel and Zechariah were also seeing: there was no physical temple building in the New Jerusalem, because the Lamb was its temple (Rev 21:22).

Given this, I think that Zechariah was also seeing the New Jerusalem when he saw his vision. When the LORD tells Zechariah to prophesy:

I believe the LORD was speaking of Messiah Yeshua who was coming to dwell in the midst of His people, through whom many nations have been joined to the LORD, becoming one with His people Israel. I don’t believe that He was speaking of His shekinah glory which filled the first temple like a cloud, by which the Hebrews believed that the LORD’s presence was with them. The Talmud in fact lists five things that the second temple lacked that was present in the first temple: the ark of the covenant, the sacred fire, the shekinah glory of the LORD, the Holy Spirit, and the Urim and Thummim.

There is much about Zechariah’s prophecy that is still waiting its fulfillment. Jerusalem is not dwelling securely without walls (a picture of peace), for as yet, at no time in its history has it enjoyed this prophesied peace and prosperity without enemies to trouble her. Zechariah is speaking partly to encourage the Jews of his own day to build, but is also prophesying partly about the future Messianic Jerusalem and temple. My opinion!

For further reading:
Answering Jewish Objections to Haggai and Zechariah (on the nature of the first and second temples)