You are here: Home / Perspective / america and nation / what would Jesus do 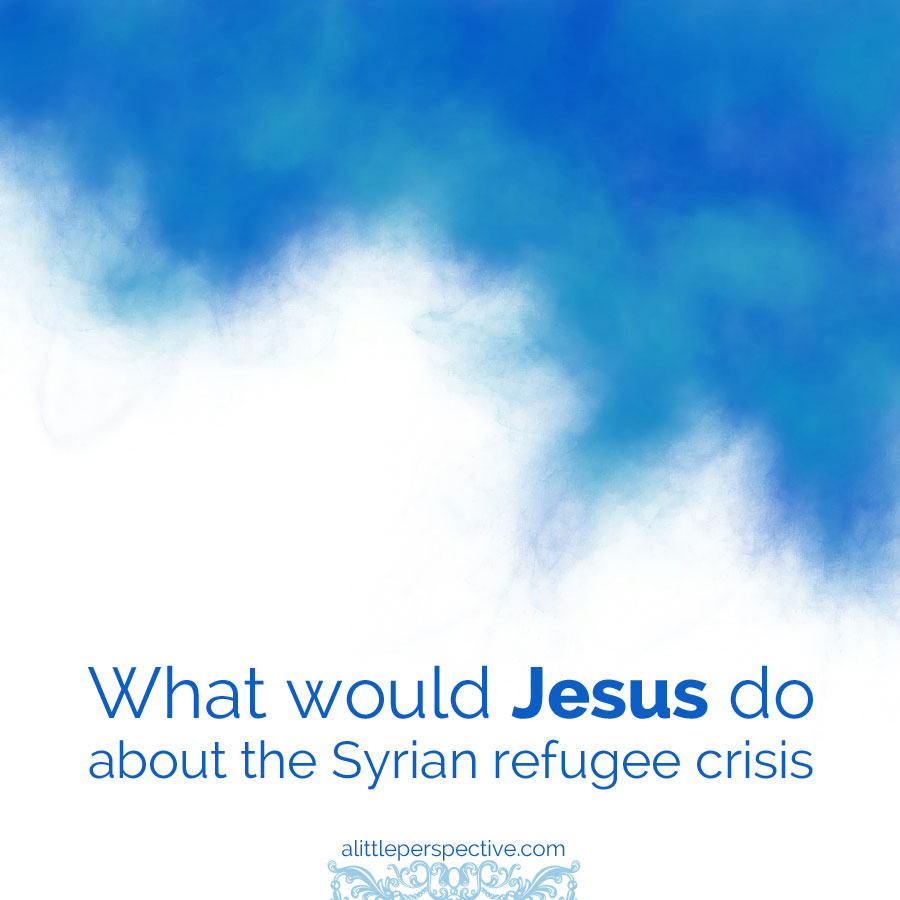 What would Jesus do with Syrian refugees? What if Jesus were King, and the Syrian refugees were knocking on His country’s doorstep? Would He let them all in, unvetted, because that is what love would do, or would He close the borders to protect His country, because radical Islamic terrorists are coming in with the refugees in order to commit 9/11- and Paris- level attacks against the country?

I have really been mulling this over, because my family is divided on the answer. When Jesus is King, the law of the land will be Torah (Psa 2:9, Rev 19:15), not Sharia, and not the Constitution. In Torah, the country is to write God’s Law, explained in Torah, at the entrance to the land (Deu 27:1-8), at the gates (entrances) to the cities and on the doorposts (entrances) to the houses (Deu 6:9). This is to establish, and to be a constant reminder to every citizen and guest visitor, that this is the Law which governs all who enter here – whether the country, the city, or the home – and this Law will be applied to all who dwell herein. There is a further admonition, made over and over again, that the Torah applies equally to strangers dwelling among the native- born.

‘Cursed is the one who does not confirm all the words of this law by observing them.’ Deu 27:26

So if Jesus were King, the law of Torah would govern the country. Worship of YHVH alone would be the law of the land, according to the Ten Commandments, the summary of the Torah (Exo 20:1-3). There would be no mosques, Buddhist temples, New Age centers, or anything outside of Biblical worship. Every citizen would be required to forsake idolatry, and every new immigrant would be required to likewise forsake idolatry, as a condition of entrance. In our hypothetical situation, no refugee, Syrian or otherwise, could enter the country unless they repudiated Islam or any other idolatrous religion or belief system (Deu 17:2-6).

Because whatever else Islam is, it is not the religion of the Bible, nor is Allah the same as Yehovah, Creator of heaven and earth.

Do you think the Syrians would still want to come? Maybe … but terrorist extremists would not be able to hide among them.

But, let’s say one or some did succeed in hiding among them, and pulled off a Paris- level terrorist attack once here. In Torah, the sanctity of life is tantamount. If killing the perpetrator is the only way to put a stop to the murdering rampage, then it is incumbent as an act of love for the innocent, to do so as soon as possible. Paris, who until recently was a stranger to terrorist attacks, is a gun- free city. Jerusalem, no stranger to terrorist attacks, is not. A similar attack could not succeed in Jerusalem on that scale because the armed would take out the perpetrator at the first instance. Weapons of self- defense are not banned in Torah, believers. Self defense, and defense of others, is not a crime of wickedness but a necessarily righteous act.

If the perpetrator can be stopped without loss of life, then the commanded response of government is to try the accused swiftly, all facts and witnesses having been gathered, and examined without prejudice (Deu 16:18-20,  see judging with just judgment). If the accused is guilty of murder, then the commanded sentence government must impose, is the swift death of the murderer (Deu 19:11-21, see the murderer shall not find refuge). Not jail (there is no concept of jail beyond sentencing in Torah. Capital crimes are punished by death, and non-capital crimes are rectified by restitution, after which the offender is free to resume his life). Not an endless string of appeals while in jail. His blood must be shed in payment for the blood he has shed. It will not bring the dead back – but swift justice tends to dampen the enthusiasm of anyone else planning to commit a similar crime.

How many of my Christian friends who are screaming “LOVE THEM” as a response to the Syrian refugee crisis would go so far as to apply the biblical standard to the refugees? I doubt even Ted Cruz would go this far. But this is exactly how far King Jesus would go – He obeyed Torah in all things then (Mat 5:17), and will again, for righteousness is the foundation of His throne (Psa 89:14).

But the elephant in the room, is that this standard is not just biblical and righteous, but it is the only loving standard and solution to the question. This IS loving them, for the Torah of God defines LOVE. It is incumbent upon believers to wash their minds with the water of the Word of God, so that the delusion which is to come upon even the elect if possible (Mat 24:24), does not come us!