You are here: Home / Bible Study / feasts of the Lord / the spring holy days 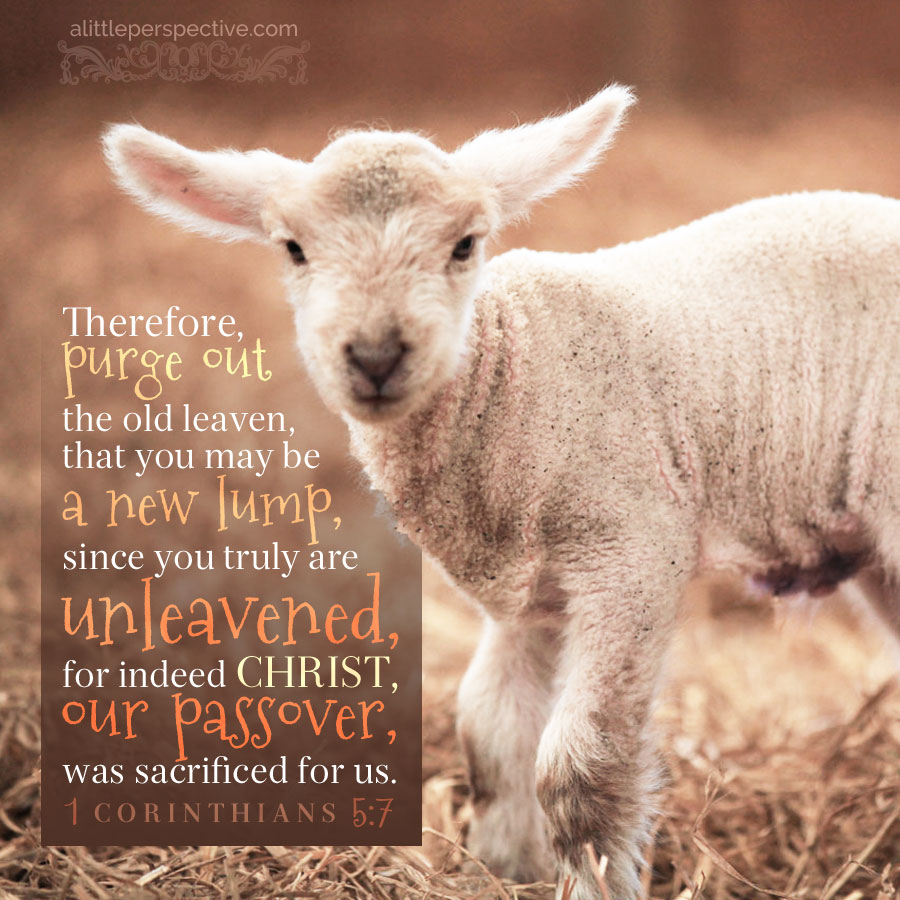 The spring feast days are three, and all fall within a one week period of each other: Passover, Unleavened Bread, and Firstfruits.

At Passover, God judged Egypt in the 10th plague, and the firstborn of every man and beast in Egypt died on the same night (Exo 12). The Hebrews, however, placed the blood of the lamb on the doorposts of their houses, and the angel of death “passed over” them. Thus they were liberated from Egypt and slavery on that night.

Nearly fifteen hundred years later, on the 14th day of the first month, the day of Passover, as Israel was preparing their lambs for sacrifice, Jesus our Messiah was nailed to the cross, and He became our Passover Lamb (1 Cor 5:7). John the Baptist said of Him, “Behold! The Lamb of God, who takes away the sin of the world!” (Joh 1:29). When we apply His shed blood to the doorposts of our hearts, the angel of death passes over us.

Notice this is something we must do. The Lamb has been slain from the foundation of the world (Rev 13:8), but we must apply His blood to our households and our hearts. God does not do it for us. He has provided the Lamb for Himself (Gen 22:8), but we must, by faith, receive His sacrifice for ourselves! The Egyptians did not, and they were not delivered from the angel of death. When we apply the blood of Yeshua to the doorposts of our heart, God redeems us from the kingdom of darkness (a type of Egypt), where we were kept in slavery and bondage to sin (Rom 6:6-7).

Jesus commanded His disciples to keep the Passover in remembrance of Him – His death, burial, and resurrection which was to come (Luk 22:19). Passover commemorates the death of Jesus on the cross, and all that His death accomplished (Isa 53:3-10) – our redemption and deliverance from slavery and sin!

The week which followed the Passover meal was Unleavened Bread, for Israel left Egypt in haste with their dough unleavened. For one week they ate unleavened bread. At the end of the week, on the seventh day, God delivered them through the Red Sea and drowned the Egyptian army which was pursuing them to bring them back into slavery.

Leaven is a allegory of sin. For just as yeast in dough begins as a small foothold, but soon multiplies until the whole lump of dough is leavened, so sin begins as a small foothold in our hearts, and can then multiply until it has leavened our whole heart with sin. As Israel removed leaven from their houses in preparation for Passover and Unleavened Bread (Exo 12:15), likewise, we ought to examine our hearts and our homes, and remove every trace of sin which might have gained a foothold, so that we can also celebrate this feast in sincerity and truth (1 Cor 5:8) – not giving lip service to the freedom from sin that God has purchased for us with His own blood, while we harbor secret sins in the recesses of our hearts.

When Israel entered the Promised Land, on the anniversary of their deliverance from Egypt, they offered up the first and best portion of the barley harvest in thanksgiving to God, for He had made them to cease wandering, and had brought them into a good Land, and gave them new life after winter, and an abundant harvest (Lev 23:9-14). This feast of Firstfruits has been celebrated every year since, on the Sunday following Passover, during the week of Unleavened Bread.

Three days and nights following Yeshua’s crucifixion on Passover, He was raised from the dead with new life, on the feast day of Firstfruits. He is the firstfruits of the resurrection (1 Cor 15:20). Just as His body was buried a natural body, but raised up a spiritual body, one day our bodies too will be clothed with immortality, and this corruption will put on incorruption (1 Cor 15:42-45). Until that day, it is by the resurrection of Jesus that we too have become a new creation in this life (2 Cor 5:17).

The work and ministry of Jesus our Messiah as described by the three spring holy days, and the transforming effect it has upon us who receive Him by faith, is summed up by Paul in Romans:

“What shall we say then? Shall we continue in sin that grace may abound? Certainly not! How shall we who died to sin live any longer in it? Or do you not know that as many of us as were baptized into Christ Jesus were baptized into His death? Therefore we were buried with Him through baptism into death, that just as Christ was raised from the dead by the glory of the Father, even so we also should walk in newness of life. For if we have been united together in the likeness of His death, certainly we also shall be in the likeness of His resurrection, knowing this, that our old man was crucified with Him, that the body of sin might be done away with, that we should no longer be slaves of sin. For he who has died has been freed from sin. Now if we died with Messiah, we believe that we shall also live with Him, knowing that Messiah, having been raised from the dead, dies no more. Death no longer has dominion over Him. For the death that He died, He died to sin once for all; but the life that He lives, He lives to God. Likewise you also, reckon yourselves to be dead indeed to sin, but alive to God in Messiah Yeshua our Lord.” Rom 6:1-11

Passover = death. At the Passover, Messiah was crucified, and we too have been united with Him in the likeness of His death. It is our old man who was crucified with Him.