You are here: Home / Bible Study / sabbath / the purpose of the sabbath 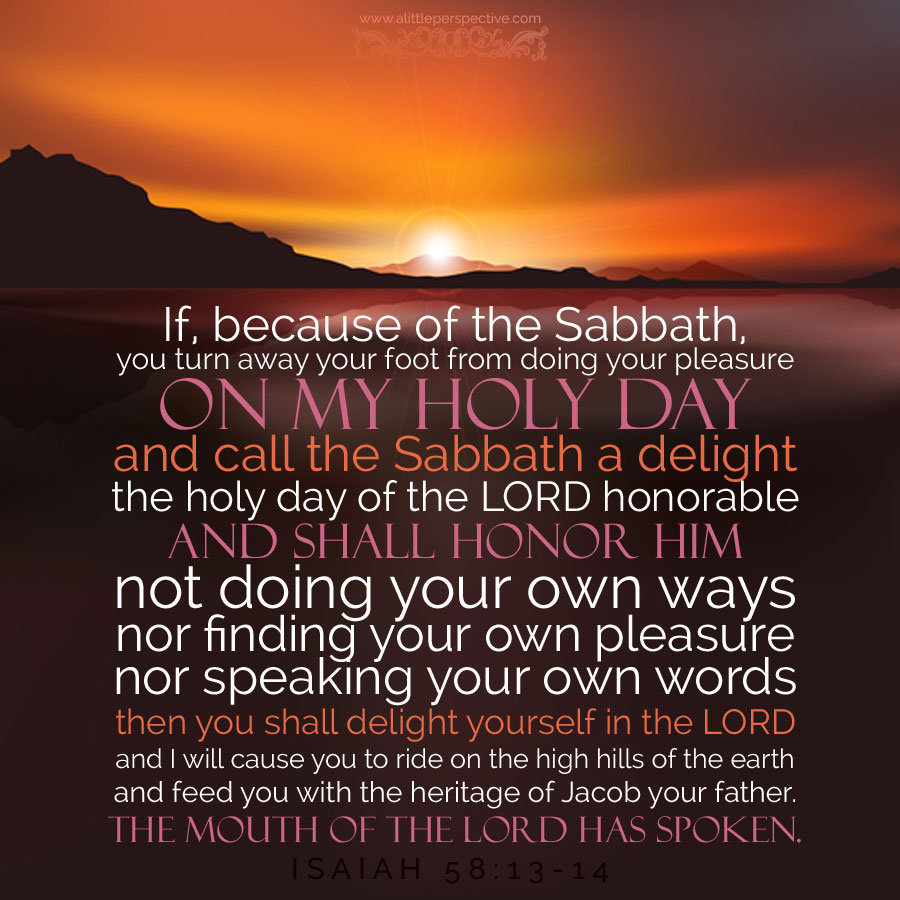 God dwelt with man together in the very beginning, in the Garden of Eden. When man sinned, he was exiled not just from the Garden, but from the presence of God. Now there stood a separation between man and His Creator. Thus came the longing deep in the heart of man. Someone might describe that longing as a search for the truth. A search for meaning or purpose. A search for fulfillment. But it is the drive within the heart of every man, to seek for the God who created him.

Seek the Lord while he may be found; call upon Him while he is near. Isa 55:6

But along with the separation, came also the consequences for sin. The ease of life went away. Man must now labor in painful toil, by the sweat of his brow, to provide food and shelter for himself and the sustenance of his family. Woman must now labor in painful toil, to raise up children who have wisdom, who do not destroy themselves by the pursuit of folly before they are mature enough to realize the value of wisdom.

To the woman He said:
“I will greatly multiply your sorrow and your conception;
In pain [Hebrew: painful toil] you shall bring forth children;
Your desire shall be for your husband,
And he shall rule over you.”
Then to Adam He said, “Because you have heeded the voice of your wife, and have eaten from the tree of which I commanded you, saying, ‘You shall not eat of it’:
“Cursed is the ground for your sake;
In toil [Hebrew: painful toil, same word] you shall eat of it
All the days of your life.
Both thorns and thistles it shall bring forth for you,
And you shall eat the herb of the field.
In the sweat of your face you shall eat bread
Till you return to the ground,
For out of it you were taken;
For dust you are,
And to dust you shall return.” Gen 3:16-19

“If, because of the Sabbath, you turn away your foot from doing your pleasure on My holy day, And call the Sabbath a delight, The holy day of the LORD honorable, And shall honor Him, not doing your own ways, Nor finding your own pleasure, Nor speaking your own words, Then you shall delight yourself in the LORD; And I will cause you to ride on the high hills of the earth, And feed you with the heritage of Jacob your father. The mouth of the LORD has spoken.” Isa 58:13-14

For the eyes of the LORD run to and fro throughout the whole earth, to show Himself strong on behalf of those whose heart is loyal to Him. 2 Chr 16:9

The LORD looks down from heaven upon the children of men, To see if there are any who understand, who seek God. Psa 14:2

Is it because He is an egomaniac? NO! Human beings, however, only pursue that which they truly desire to obtain! If a man does not want something very badly, he does not put forth much effort in obtaining it. But if he deeply desires something, then he goes to any lengths to obtain the true desire of his heart.

Those who seek Him, are those who understand among the children of men. Understand what? That without Him, life is meaningless! That He is the point and the purpose of their existence! To those men, He reveals Himself:

This is Jacob, the generation of those who seek Him, Who seek Your face. Psa 24:6

The young lions lack and suffer hunger; But those who seek the LORD shall not lack any good thing. Psa 34:10

The LORD is good to those who wait for Him, To the soul who seeks Him. Lam 3:25

He does not withhold Himself from those who seek Him with all their hearts. But those who are casual or half- hearted toward Him, or toward wickedness, evil, and sin, to compromise with it, He hides Himself:

Now the Spirit of God came upon Azariah the son of Oded. And he went out to meet Asa, and said to him: “Hear me, Asa, and all Judah and Benjamin. The LORD is with you while you are with Him. If you seek Him, He will be found by you; but if you forsake Him, He will forsake you.” 2 Chr 15:1-2

For thus says the LORD, Who created the heavens, Who is God, Who formed the earth and made it, Who has established it, Who did not create it in vain, Who formed it to be inhabited: “I am the LORD, and there is no other. I have not spoken in secret, In a dark place of the earth; I did not say to the seed of Jacob, ‘Seek Me in vain’; I, the LORD, speak righteousness, I declare things that are right.” Isa 45:18-19

Then they will cry to the LORD, But He will not hear them; He will even hide His face from them at that time, Because they have been evil in their deeds. Mic 3:4

If someone was not experiencing the presence of the Lord as they would like, I would counsel them to begin by seeking His face with their whole heart! To confess their sin, and repent of it! To take the definition of righteousness and sin from His own Word, from Torah, and repent of substituting man’s definitions for God’s! To cease pursuing their own business and interests on His holy day, and set it aside to pursue Him!

Behold, the LORD’s hand is not shortened, That it cannot save; Nor His ear heavy, That it cannot hear. But your iniquities have separated you from your God; And your sins have hidden His face from you, So that He will not hear. Isa 59:1-2

I have stretched out My hands all day long to a rebellious people, Who walk in a way that is not good, According to their own thoughts. Isa 65:2

« shabbat in the ancient hebrew pictographs
the assembly requirement »