You are here: Home / Bible Study / babel / babylon / The origin of the goat demon in antiquity 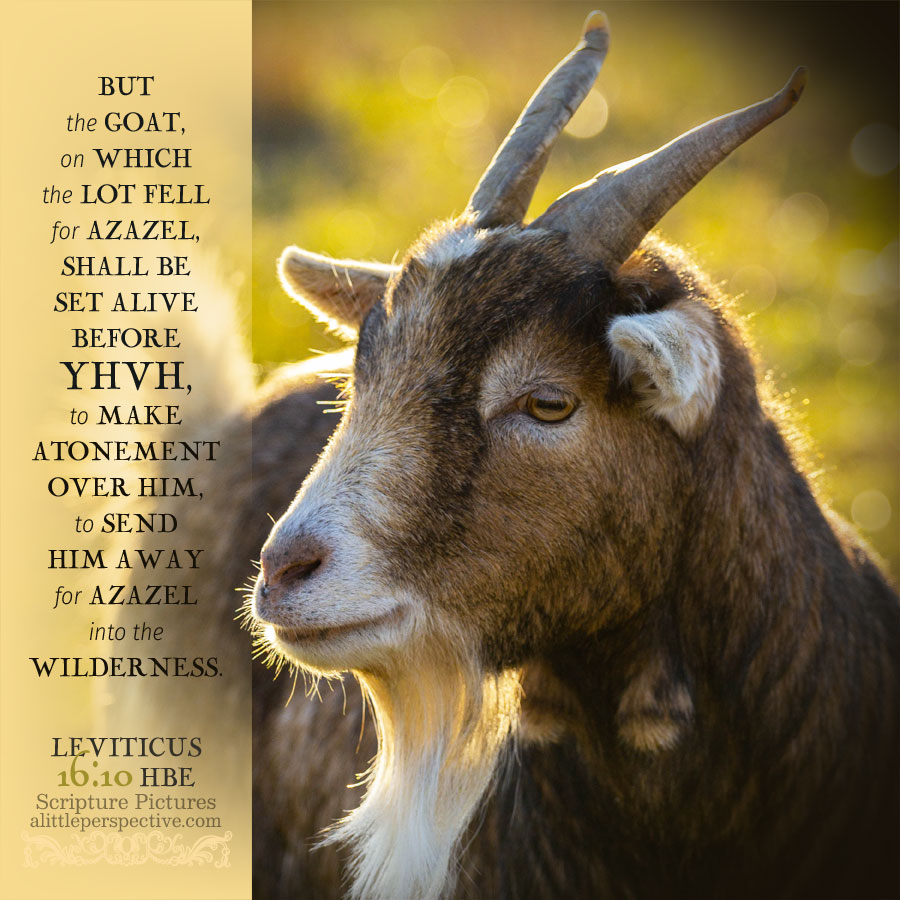 THE SCAPEGOAT, or AZAZEL, from the Hebrew Bible in English:

5 And he shall take of the congregation of the children of Israel two he-goats for a sin-offering, and one ram for a burnt-offering. 6 And Aaron shall present the bullock of the sin-offering, which is for himself, and make atonement for himself, and for his house. 7 And he shall take the two goats, and set them before YHVH at the door of the tent of meeting. 8 And Aaron shall cast lots upon the two goats: one lot for YHVH, and the other lot for Azazel. 9 And Aaron shall present the goat upon which the lot fell for YHVH, and offer him for a sin-offering. 10 But the goat, on which the lot fell for Azazel, shall be set alive before YHVH, to make atonement over him, to send him away for Azazel into the wilderness.  Lev 16:5-10

Reading the Hebrew Bible in English, it sounds as if the two goats are for two entities, doesn’t it, one for YHVH and one for Azazel, whoever that might be. The possibility seemed so remote that the English translators translated the proper name “Azazel” to “scapegoat.” The KJV translation of this passage is the origin of the word “scapegoat” in English. 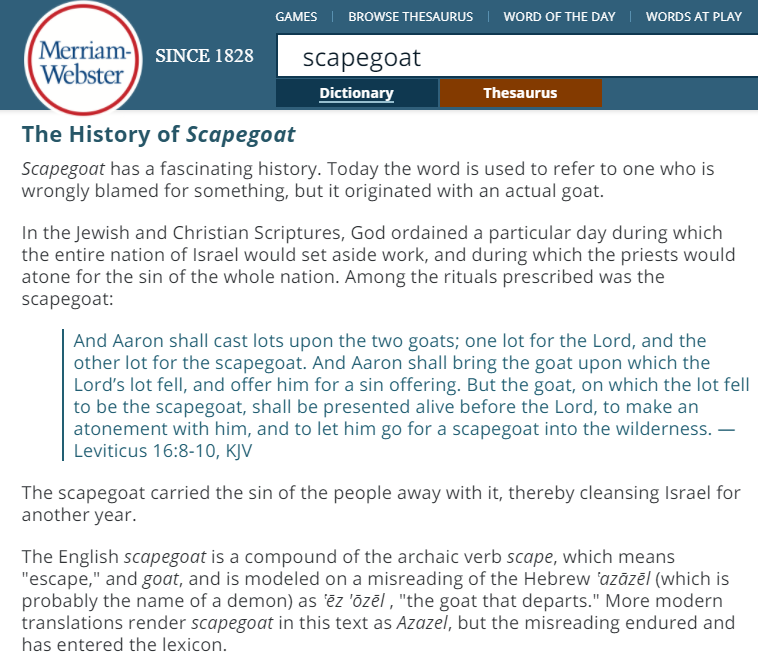 The second is Strong’s H235 אזל azal, a primitive root meaning, “to go away.”

The cognate words will help us find the parable. To shake, to waver, branch, twig, cymbal, bell, all come from the zayin + lamed pair. To cut (zayin) a staff (lamed), is to cut a green branch from a tree. The green branch is flexible (thus shake, waver) and can be manipulated to the desired shape until it hardens, to make a staff. Cymbals vibrate (a wavering back and forth) to make sound, and bells are shaken back and forth also. Thus a powerful (aleph) wavering back and forth (zayin + lamed) seemingly connected to this passage of Scripture:

And Cain went out from the presence of YHVH, and dwelt in the land of Nod, on the east of Eden. Gen 4:16

The footnote in my Bible says of Nod, Literally, Wandering. To nod our head is to move it back and forth. To wander is to go to and fro. So Cain went away from the presence of YHVH, and became a Wanderer. He was the first scapegoat.

The “scapegoat” ceremony is ancient, Gesenius even, while commenting on its antiquity, rebukes those who would say that YHVH derived His commandments from ancient practices. Rather, I am finding, that many Torah practices predated Sinai (such as Cain and Abel knowing how to bring an acceptable sacrifice, or Noah knowing which animals were clean and unclean) and were known as the ways of Adonai. Abraham kept the ways of Adonai, and taught them to his children:

Abraham hearkened to My voice, and kept My charge, My commandments, My statutes, and My laws. Gen 26:5

For I have known him, to the end that he may command his children and his household after him, that they may keep the way of YHVH, to do righteousness and justice; to the end that YHVH may bring upon Abraham that which He has spoken of him. Gen 18:19

But 200 years in Egypt had corrupted the Hebraic culture Abraham had bequeathed to his heirs, and, when they were free of Egypt, YHVH reestablished His way among them, to Moses at Sinai, with added explanation which became the Torah, the five books of Moses.

Besides Gesenius, there is a second witness of the antiquity of the scapegoat ceremony, predating Moses.

There has been much discussion regarding the meaning of the word Azazel. The opinions which seem most worthy of notice are the following:

1. It has been regarded as a designation of the goat itself. This view has been most favored by the old interpreters. They in general suppose it to mean, the goat sent away, or let loose. …

2. Some have taken Azazel for the name of the place to which the goat was sent. …

3. Many of those who have studied the subject most closely take Azazel for a personal being to whom the goat was sent. (a.) Gesenius gives to עזאזל the same meaning as the LXX. has assigned to it, if άποπομπαϊος is to be taken in its usual sense; but the being so designated he supposed to be some false deity who was to be appeased by such a sacrifice as that of the goat. He derives the word from a root unused in Hebrew but found in Arabic, עזל to remove or take away (Heb. Lex. s.v.). Ewald agrees with Gesenius, and speaks of Azazel as a demon belonging to the pre-Mosaic religion. (b.) But others, in the spirit of a simpler faith, have regarded him as an evil spirit, or the devil himself. In the book of Enoch the name Azalzel is given to one of the fallen angels; and assuming, with Spencer, that this is a corruption of Azazel, if the book were written, as is generally supposed, by a Jew, about B.C. 40, it represents an old Jewish opinion on the subject. Origen, adopting the word of the LXX., identifies him with the devil: (Greek quotation) (sc. η ο διαβολος) (c. Cels. vi. 305, ed. Spenc.). Of modern writers, Spencer and Hengstenberg have most elaborately defended the same opinion. Spencer derives the word from עז, fortis, and אזל, explaining it as cito recedens, which he affirms to be a most suitable name for the evil spirit. He supposes that the goat was given up to the devil, and committed to his disposal. …

I agree with the 3rd possibility shared by Gesenius and others, that Azazel was the name of a personal being.  We have seen that Cain was the first “scapegoat,” sent away from the presence of YHVH to wander. He was marked. The Hebrew letter depicting the mark is tav, ת the pictograph of the cross. The cross bore the sins of the world in the body of Messiah Yeshua, where they were taken away. This is the uncorrupted truth of the history, which the scapegoat ceremony recorded in Lev 16 foreshadows.

My belief is that ha’satan, as he always does, appropriated the scapegoat ceremony foreshadowing the way of YHVH in bearing away sin, and adopted the goat or goat head, as the ancient artifacts depict him, wearing sin as a cloak or a badge of honor. He exalted sin.

So it is not YHVH who borrowed from antiquity, but YHVH was known in antiquity and His practices appropriated and corrupted by ha’satan. Ha’satan’s worship in the form of Azazel, or, as he is commonly known today, Baphomet, is as ancient as the pre-diluvian world.

Moreover, the “synagogue of Satan” mentioned in Rev 2:9 and 3:9 refers to those Jews who were a part of his cult. Smyrna had a large Jewish population. They were so anti-Messiah that when the pastor of the church at Smyrna, Polycarp, a disciple of John, was to be martyred in the arena, having been decided that he should be burnt alive, it was the Jews of the Smyrna synagogue who brought the wood for the fire, bearing the burden of it on a Sabbath day.

This passage is where many in the history of the church got the idea that all Jews were of Satan, and persecuted them fiercely. The letter does not say that. But some Jews were. I even found a 16th century book on Jewish Kabbalism with a depiction of Baphomet on the cover (see the ancient artifacts gallery, linked above). The Rothschild family are Jewish in their ethnicity, but are well known as one of the premier Satan-worshiping families today.

We began investigating the meaning of sons of God who went in to the daughters of men, with evidence that the most accurate translation should read, sons of the gods, that is, sons of the rulers, mortal men, however of the elites, who forcibly took the daughters of common men in the first instance of human trafficking in recorded history. This understanding is confirmed in Psalm 82, equating the sons of the Most High to the mighty, rulers or judges who have fallen, the same root as nephilim. A study of the Hebrew elohiym, translated God, the true God, or false gods, angels, rulers, or judges, depending on context, and its use in Scripture highlights the distinction already noted for sons of God in Gen 5:32-6:4 and Psalm 82. Next, the sons of God (bene ha’elohiym) who present themselves before YHVH, Satan also coming among them, from Job 1 and 2, is better understood as the sons of the rulers who present themselves before God on the earth, in corporate worship. The Hebrew makes a distinction between the sons of the gods, that is, the sons of the rulers, in Job 1 and 2, and the sons of God who shouted for joy, in Job 38:7. But is there a connection between the natural, human rulers, and the spiritual, angelic or demonic rulers, both described by elohiym in Scripture? Yes, as it turns out. Thus we have seen “sons of God” refer to humans, as sons of the rulers or judges; and angels. We have seen spiritual principalities of wickedness linked to their human kings as counterparts. What about the other perfectly acceptable translation, sons of the gods? We have to remember that “gods,” meaning false gods, were not just non-entities in Scripture. They were actual demons, “goat-devils,” to be exact. The investigation into the Hebrew led to Leviticus 16 and 17, and the scapegoat ceremony as noted above. The Torah practice of the goat bearing away the sins of Israel was an ancient way of Adonai, and foreshadowed the Son of God bearing away the sins of the world on the cross. The adversary appropriated and corrupted Adonai’s ancient way, thus we have the historic depiction of ha’satan with a goat head, predating Torah, and even surviving to modern times.

This concludes my study into the sons of God from Scripture and history.