You are here: Home / Homeschooling / book reviews / the door in the wall by marguerite de angeli 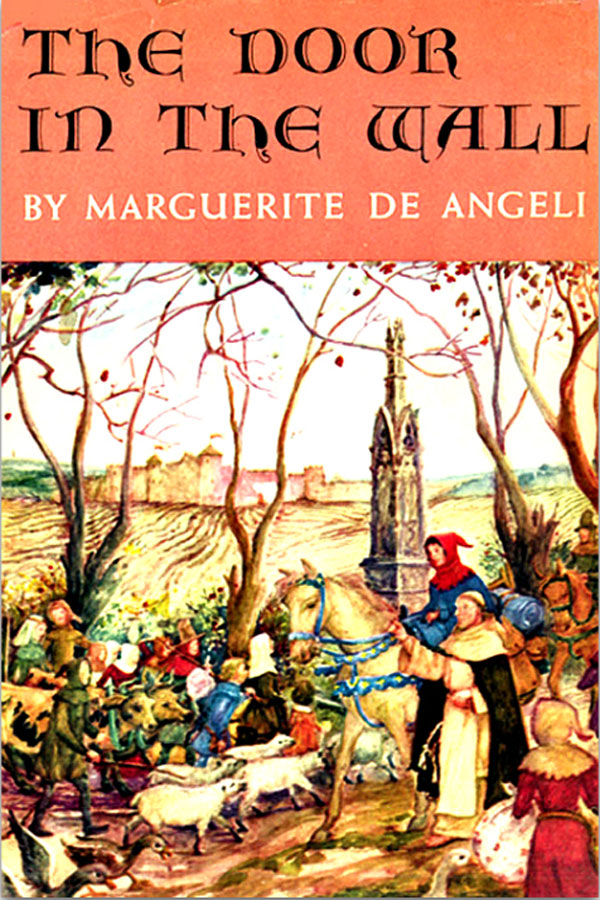 Historical fiction set in early 14th century England during the wars with Scotland.

Integrate with The Story of the Middle Ages at chapter CXIV: The Murderers Punished, or CXVIII: The Age of Chivalry.

It has been settled that young Robin, the son of noble parents, will travel to a neighboring lord’s holding to train as squire and eventually knight in the king’s service, while his father accompanies the king on the wars with Scotland, and his mother accompanies the queen as one of her noble ladies in waiting. However, on the eve of his departure, London is swept with the plague, and Robin becomes ill with a malady which leaves his legs crippled. His parents’ servants, who were to see to him in their absence, are taken with plague, and Robin, unable even to stand, is left bedridden and alone. Upon hearing of his plight, a local friar carries the boy to the abbey, where the monks begin his education in reading, writing, and woodcarving, along with physical training to help him recover what use of his body that he may. Along the way Robin is transformed from a spoiled, bitter child, to a young man of character and honor. In the company of Brother Luke and one of his father’s retainers, who had searched for him, he makes an adventurous journey to the neighboring lord’s holding. They are received joyfully and soon settle into the daily life of the castle. But when they are trapped in the castle by neighboring Welsh attackers, only Robin sees a way to save them – if his strength and his courage will hold!

This book is set in medieval England, and the Roman church, the monks, and their abbey figure prominently. The monks exhibit true Christian charity in their care of Robin and in the pursuit of their duties. The climax of the book occurs on Christmas day, and the medieval celebration of the day is described. The story is interesting and engaging; the historical detail, even of the speech, is seamlessly integrated into it; and the reader easily journeys with Robin from spoiled child to young man of courage.