You are here: Home / Bible Study / apologetics / the debate is continuing 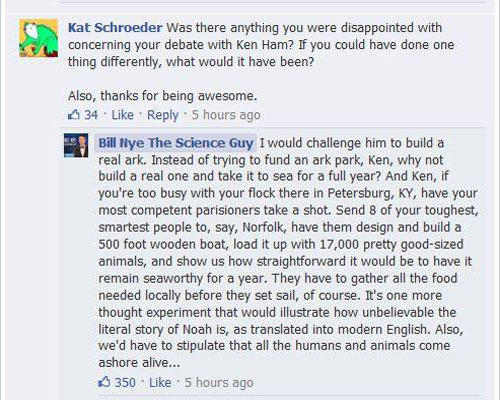 “I would challenge him to build a real ark. Instead of trying to fund an ark park, Ken, why not build a real one and take it to sea for a full year? And Ken, if you’re too busy with your flock there in Petersburg, KY, have your most competent parishioners take a shot. Send 8 of your toughest, smartest people to, say, Norfolk, have them design and build a 500 foot wooden boat, load it up with 17,000 pretty good-sized animals, and show us how straightforward it would be to have it remain seaworthy for a year. They have to gather all the food needed locally before they set sail, of course. It’s one more thought experiment that would illustrate how unbelievable the literal story of Noah is, as translated into modern English. Also, we’d have to stipulate that all humans and animals come ashore alive …”

“Bill, during the debate last Tuesday, I asked you this question:

“How do you account for the laws of logic and laws of nature from a naturalistic worldview that excludes the existence of God?”

“I challenge you, once again, to provide a rational basis for your worldview. You dodged the question in the debate, and you continue to do so. Until you answer that question, you have no reason to trust your inductions or the uniformity of nature and have no basis to tell us what is right and wrong. I trust those things because I know the God of the universe who created those laws and has promised to uphold them in a uniform way–which is consistent with His perfect character. Indeed, I have a reason for my reasoning.

“The battle, as I said more than once in our debate, is not about the evidence. (And it seems even a number of Christian naysayers about the debate still don’t get this vital point, either!)

“And besides, Bill, you know this, as I even showed you a “single piece of evidence” of an out of place fossil (using the secularists’ own dating methods)—45,000-year-old wood in 45-million-year-old rock! You said one piece of evidence like this would change your mind—but you willingly ignored it.

“Again, why is your assumption that science is possible apart from God reasonable?

“Frankly, you are not a “reasonable man” because no reasonable man who claims to be consistent with reality rejects the truth of God’s Word. In fact, the Bible makes it clear in Romans chapter 1 that you know God exists, but you are suppressing that truth in what the Bible calls unrighteousness.

“No “reasonable man” believes that reason, emotion, or morality evolved from the random interaction of chemicals over billions of years. Therefore, you have no foundation. You have a blind faith, one which causes you to borrow from the Christian worldview to even make sense of the world around you.

“Bill, I urge you to use your God-given reason to respond to God’s Word, such as:

“Repent therefore and be converted, that your sins may be blotted out, so that times of refreshing may come from the presence of the Lord.” (Acts 3:19)

“Bill, Noah’s Ark was a real ship—and it is a picture of a real message of salvation from God’s judgment on man’s sin, including yours. (And the answers to your questions about the seaworthiness of the Ark and how it could have been built are on our website; also AiG is not a church and so we don’t have parishioners.) Just as Noah and his family went through the door of the Ark to be saved, we need to go through the door of our Ark of Salvation.

Ken did not provide Bill with more evidence, because Bill has already ignored the evidence and answers he has already been given. Ken kept the discussion targeted to the heart of the disagreement, which is the spiritual question. Now why is this wisdom from the Spirit of God?

If the blindness is spiritual, physical or natural evidence is not the cure:

For the wrath of God is revealed from heaven against all ungodliness and unrighteousness of men, who suppress the truth in unrighteousness, because what may be known of God is manifest in them, for God has shown it to them. For since the creation of the world His invisible attributes are clearly seen, being understood by the things that are made, even His eternal power and Godhead, so that they are without excuse, because, although they knew God, they did not glorify Him as God, nor were thankful, but became futile in their thoughts, and their foolish hearts were darkened. Professing to be wise, they became fools, and changed the glory of the incorruptible God into an image made like corruptible man—and birds and four-footed animals and creeping things. Rom 1:18-23

Paul was expounding on one of Jesus’ teachings dealing with this issue of spiritual blindness:

“There was a certain rich man who was clothed in purple and fine linen and fared sumptuously every day. But there was a certain beggar named Lazarus, full of sores, who was laid at his gate, desiring to be fed with the crumbs which fell from the rich man’s table. Moreover the dogs came and licked his sores. So it was that the beggar died, and was carried by the angels to Abraham’s bosom. The rich man also died and was buried. And being in torments in Hades, he lifted up his eyes and saw Abraham afar off, and Lazarus in his bosom.

“Then he cried and said, ‘Father Abraham, have mercy on me, and send Lazarus that he may dip the tip of his finger in water and cool my tongue; for I am tormented in this flame.’ But Abraham said, ‘Son, remember that in your lifetime you received your good things, and likewise Lazarus evil things; but now he is comforted and you are tormented. And besides all this, between us and you there is a great gulf fixed, so that those who want to pass from here to you cannot, nor can those from there pass to us.’

“Then he said, ‘I beg you therefore, father, that you would send him to my father’s house, for I have five brothers, that he may testify to them, lest they also come to this place of torment.’ Abraham said to him, ‘They have Moses and the prophets; let them hear them.’ And he said, ‘No, father Abraham; but if one goes to them from the dead, they will repent.’ But he said to him, ‘If they do not hear Moses and the prophets, neither will they be persuaded though one rise from the dead.’” Luk 16:19-31

Moses and the prophets begins with, “In the beginning, God created the heavens and the earth,” (Gen 1:1). Bill Nye incorrectly stated that he would change his mind if he saw just one piece of evidence. There is no evidence now for darwinian molecules to man evolution (see darwinism unproven), and yet he adheres to it on faith. An entire mountain of evidence could be piled in front of him (and in fact, there already is an entire mountain posted at the Answers in Genesis website, including answers to the specific objections he brought forward in the debate, publicly accessible to anyone, including Bill Nye) and he would not change his mind, because if someone has closed their heart and mind to Moses and the prophets, no amount of evidence will open it.

However, “Faith comes by hearing, and hearing by the Word of God,” (Rom 10:17). Ken is correctly speaking the Word of God to Bill’s ears, the only thing powerful enough as a two-edged sword, to cut through spiritual blindness.