You are here: Home / Bible Study / babel / babylon / the chiastic structure of history 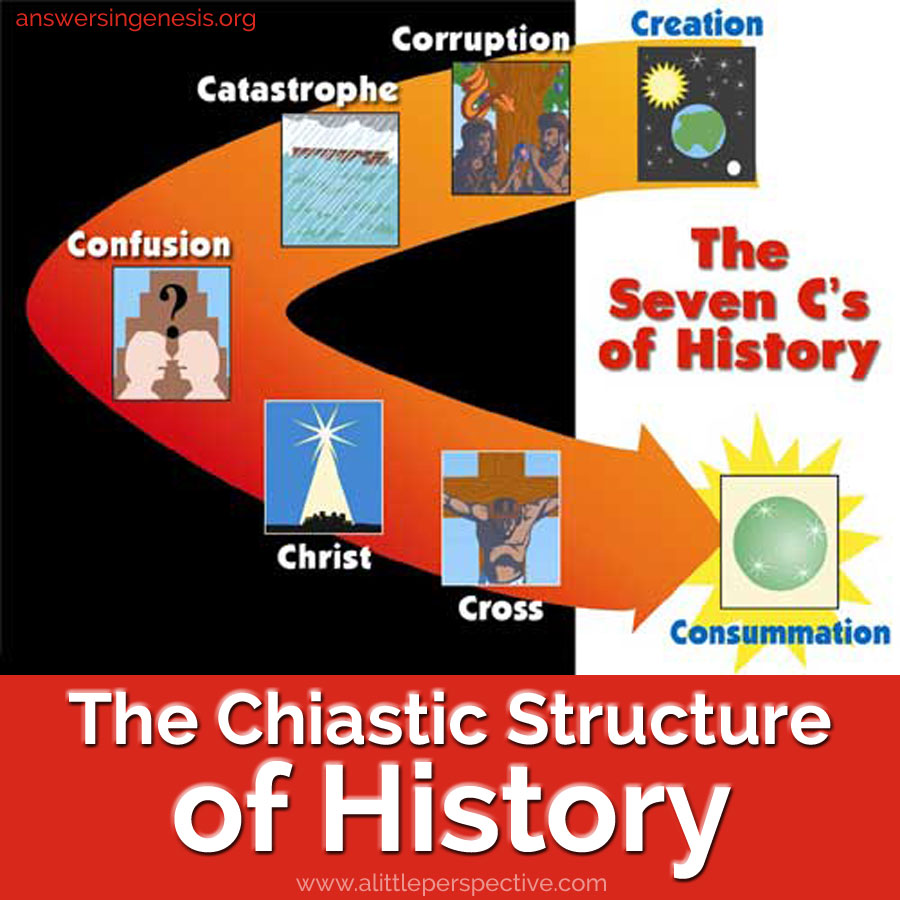 During the debate between Ken Ham and Bill Nye, Ken at one point put up the famous graphic depicting the 7 Cs of History, that all of us who have been to an AiG or homeschooling conference know and recognize. As he was explaining the 7 Cs to Bill Nye and the debate audience, I realized: history forms a single chiastic structure, and Ken Ham and AiG have hit upon the matching elements.

For those unfamiliar with chiastic structures, they are a literary device found in abundance in Scripture, from beginning to end. They are one of the thumbprints of God on His Word, that reveal a single divine author from beginning to end (the Holy Spirit), as their beauty, elegance, logic, and symmetry is impossible for a human mind to duplicate in the complexity that they are found in Scripture.

Please see the teaching tools of scripture to learn more about chiastic structures.

Here is the chiastic structure of history, based on AiG’s 7 Cs of history:

1a) Creation, in which the Creator made all things very good (Gen 1-2);
–> 1b) Corruption, in which the First Adam sinned against God and introduced death and disease into God’s perfect creation (Gen 3, Rom 8:20-22);
—-> 1c) Catastrophe, in which God judged the unrestrained wickedness of mankind with a global flood, in which all land-based life perished on the face of the earth, except for that preserved through judgment in Noah’s ark (Gen 6-9);
——> central axis) Confusion, in which all the nations of the earth came together at the Tower of Babel rebellion to deny God as Creator and God, and God separated their languages (Gen 11:1-9);
—-> 2c) Christ, in which the promised Redeemer, Jesus Christ, stepped into history to become the ark of salvation for all who believe in Him (the book of Matthew);
–> 2b) Cross, in which the Last Adam, Jesus Christ, took upon Himself the punishment for sin, and opened the way for mankind to be restored to life and fellowship with his Creator (Mat 26-27, Rom 5-6);
2a) Consummation, in which the Creator will restore all things to its perfect state, and sin, sorrow, and death are no more, for the former things have passed away (Rev 21-22).

Now why is the Tower of Babel rebellion the central axis of history? It might be that the First Adam sinned inadvertently, without malice and forethought, not grasping the far- reaching consequences that his simple action of the moment would introduce. However, the descendants of Adam, the whole of mankind, assembled together in their nations at Babel, did grasp, and with malice and forethought, rejected God as Creator and God (see the babylon connection, parts one through sixteen). This is the action which has shaped history, and which the return of Jesus Christ to rule and reign over all the nations of the earth, will correct and heal. His reign will be the capstone of history, which will conclude it, as immediately following it, we will enter into life eternal in a new heavens and a new earth, united with God our Creator and Father forever.

Thus His Story of Redemption, Love, and Grace in the face of Sin, Rebellion, and Rejection will be concluded!