You are here: Home / Perspective / america and nation / the ballot watermark: truth or conspiracy theory?

“As seen in the clipping below, the Verified Department of Homeland Security’s Account in the Associated Press’s “OneWire” content accumulation service speaks about the DHS’s Election Audit and how it determined sharp inaccuracies in the election in favor of Joe Biden. Before we dive into the post on OneWire, we need to discuss a few things.”

“What Is AP News’s OneWire? OneWire is the name of a service that connects agencies and reporters from across the planet together. Their job is simple. Make a platform that makes it easy to share information between verified sources in order to cut down on misinformation. Hence the name “Associated Press” and “OneWire”. OneWire can only be accessed by content providers and sharing partners in the news networks in the United States and abroad.”

“Can I Read AP OneWire Articles? The general public cannot read AP OneWire press releases until a provider or other journal agency releases the text of that article for public viewing. Once that occurs, it is called a “lead off”. A lead off will act as a source for the information. Sometimes, these articles are leaked before they are shared by content providers, such is the case as I will allow you to see it.”

“DHS’s Press Release: This release is not public. I can share the link all I want, and unless you have an AP OneWire account through your employer, you simply will not be able to view it. Nobody else will allow this to go public either, so I decided to leak it. We deserve to know what’s going on.” 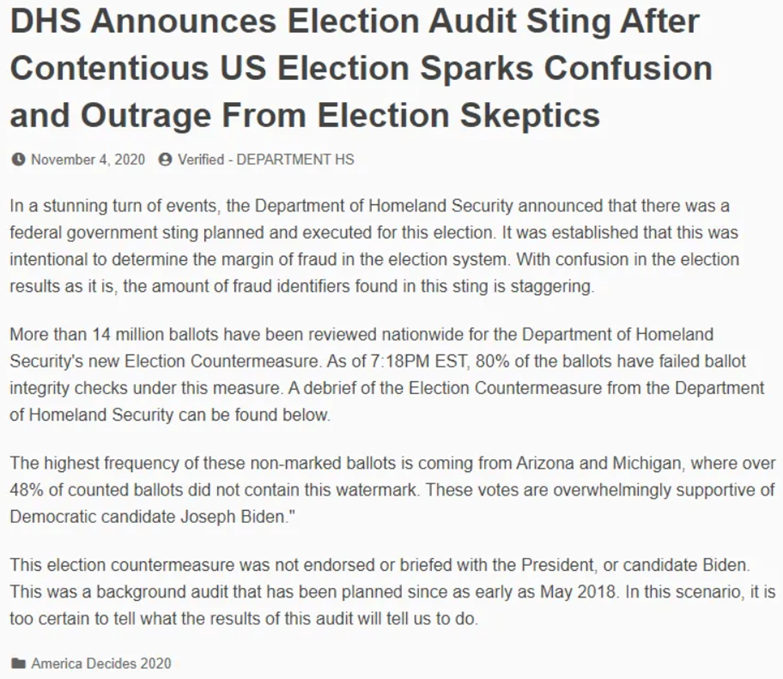 Now is this true? It cannot be verified just by following the link posted in the article, because it is a link to an internal server at a news organization. You have to be logged in to that server for the link to work. The comments to this report discusses its legitimacy, and how it can be verified. I encourage everyone to investigate it for themselves. But this is why it very well might be true:

“Homeland Security Secretary Kirstjen Nielsen on Wednesday called on election officials in all 50 states to ensure that ballots used during the 2020 presidential election are able to be audited.”

Nielsen … wants “all state and local election officials to make certain that by the 2020 presidential election, every American votes on a verifiable and auditable ballot.”

“Our systems must be resilient. We must be able to demonstrate that the votes count and that they are counted correctly,” she added.”

“A 24/7 war room will operate from Election Day until local officials are confident in the results. It shows just how far DHS’s cybersecurity agency has come since 2016.”

This tells us that if there is fraud or voting irregularities, it is domestic in source, and not international election interference. There will not be a repeat of the 2016 “Russian Collusion” narrative.

“The Department of Homeland Security’s (DHS) cybersecurity agency announced Thursday it would partner with election officials and private sector groups to develop an election auditing tool that can be used to help ensure the accuracy of votes in 2020.”

What is that tool? Interestingly enough: 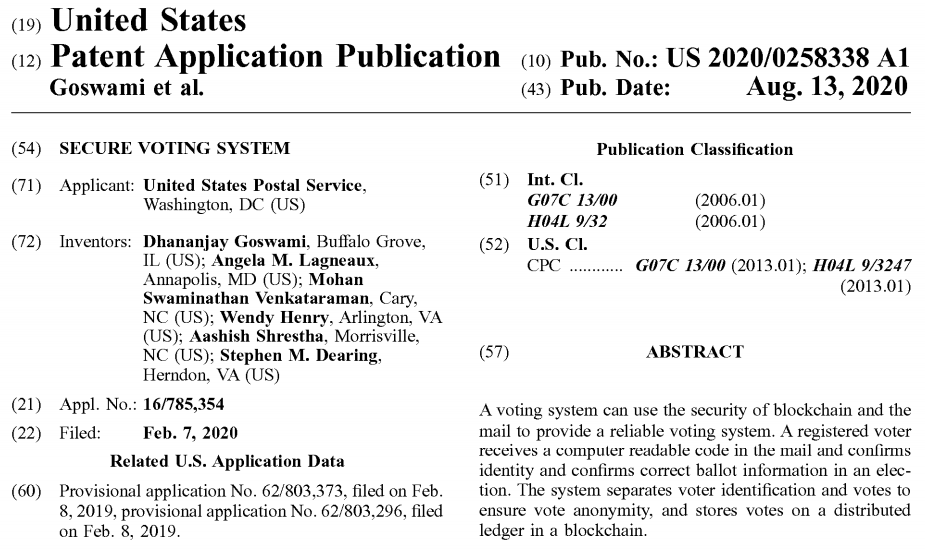 Now, if only official ballots are watermarked with the above tool, what about the unofficial ones that were inserted for vote fraud?

“A Machine Identification Code (MIC), also known as printer steganography, yellow dots, tracking dots or secret dots, is a digital watermark which certain color laser printers and copiers leave on every single printed page, allowing identification of the device with which a document was printed and giving clues to the originator. Developed by Xerox and Canon in the mid-1980s, its existence became public only in 2004. In 2018, scientists developed privacy software to anonymize prints in order to support whistleblowers publishing their work.[1][2][3]” 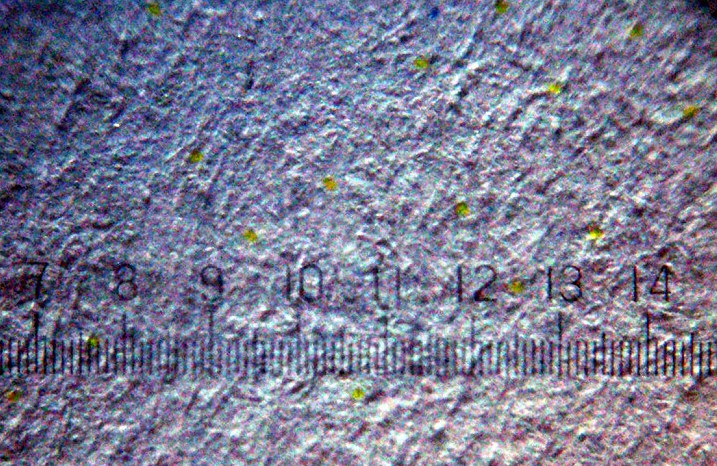 If official ballots are so watermarked, and if election fraudsters copied blank ballots to fill out and add to the stack, they can be identified in a recount and thrown out. Furthermore, it also means the machine which did the copying can be identified, along with who owns it. In the DHS press release, they claim 48% of ballots were unofficial, or fraudulent, that have been added to totals in certain states. This is scientific evidence that will stand up in a court of law!

Using a gem loupe, a citizen finds the invisible watermark on her ballot stub.

The X22 Report breaks down the above with reference to Q clues.

The X22 Report is one of the largest Q reporters, with reason. He has a very stable track record.

“The [DS]/MSM did exactly what the patriots thought they were going to do. The saw the landslide, the red wave and had to shut it down before it took effect. The [DS]/MSM have just outed themselves. Remember the [DS]/[CB] are going to fight to the very end, and they will use everything in the arsenal to get rid of Trump. The birth of a new nation does not come easy, just go back in history to the founding fathers, the British fought to the bitter end. The patriots knew this was going to happen, they know the playbook, the trap is set. This is not about the election, it is about returning the power to the people and the people have voted and the [DS] /MSM stopped the voice of the people when they stopped the elections. Watch what happens next.”

“All source links to the report can be found on the x22report.com site.”

There are multiple mainstream websites that have already labeled the Ballot Watermark story a “conspiracy theory” and claim to have debunked it. Yet as one commenter noted, debunking a semantic point does not debunk the body of the claim, and just labeling something a conspiracy does not debunk anything either.

I noticed today while I was researching for this post, that new articles starting showing up questioning the legitimacy of Chad Wolfe to serve as head of the DHS. He has been operating in that capacity for some time, and this is the first time he is being called illegitimate? Um, I think the powers that be suddenly realized they have been caught with their hands in the cookie jar and decided an attempt at damage control was in order.

The immediate and loud outcry from the mainstream misleadia adds the air of legitimacy to this story, don’t you think? They doth protest too much. Hang in there, patriots! Justice will prevail.

Confirmation from former CIA and a cryptologic expert: 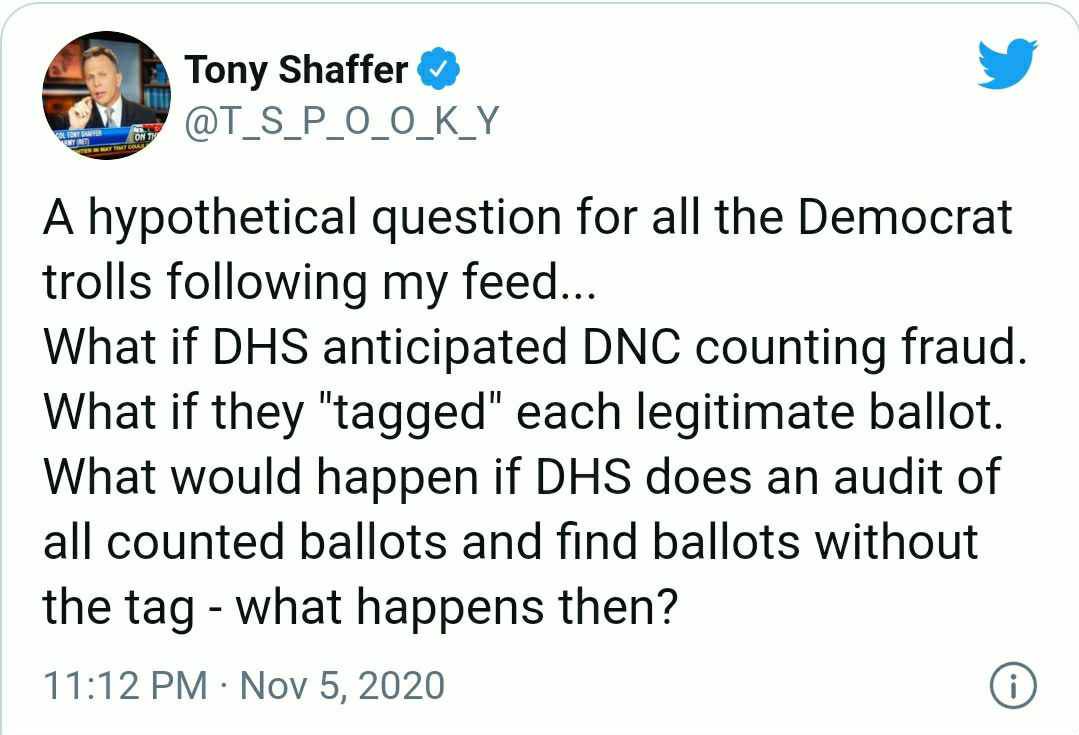 My military historian, Carlos Osweda, whom I have been archiving here, was banned from Twitter. But he also confirms the CISA involvement in securing our elections via paper ballots. This will never happen again, folks, thanks to our wonderful President!