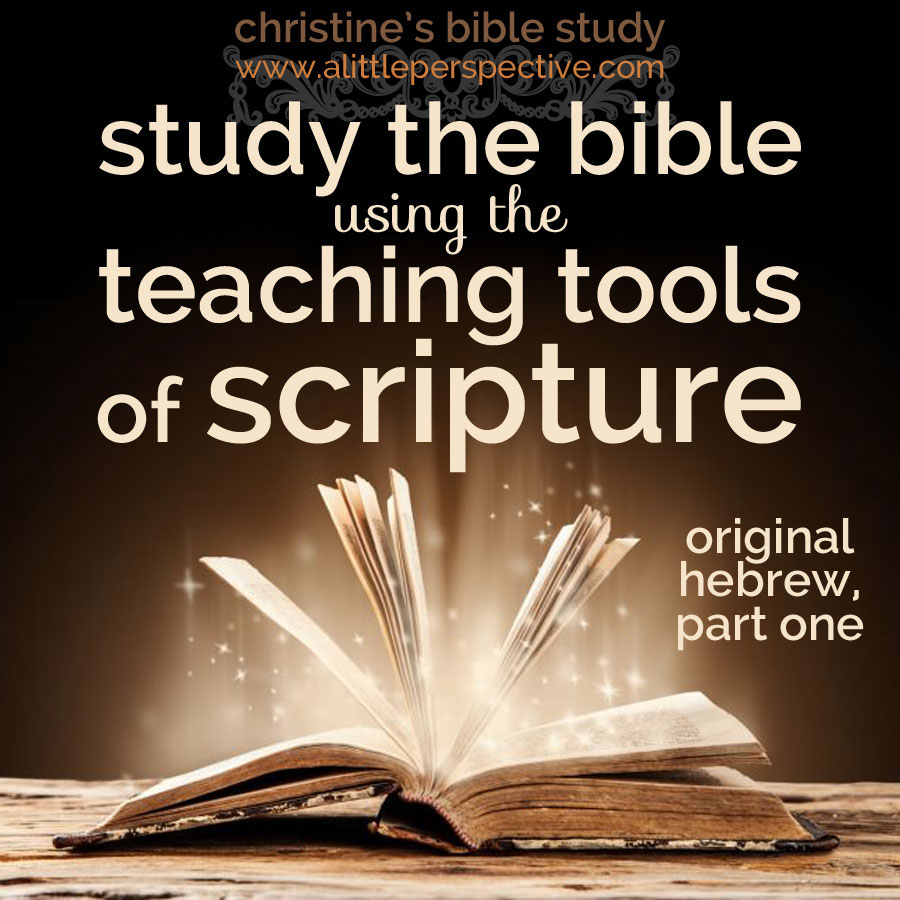 Today we will look at one of my favorite teaching tools, the meaning of the original Hebrew. Hebrew is the original language, which was divided at Babel, and is most likely the language spoken by God from the top of Mt. Sinai when He voiced His commandments to Israel with an audible voice. It is a uniquely-designed language which itself speaks of many spiritual and natural realities and laws, and in itself paints prophetic pictures. This fascinating topic is too much to get into here, but suffice it to say that looking at the original Hebrew of the text of Scripture provides amazing insights.

Ancient Hebrew was a symbolic language of pictures, with 22 letters which were pictographs for things we see and recognize in our every day lives in the world around us. It has been said that Hebrew in its original pictographs is meant to be understood even by children who have not yet learned to read, for every picture sequence tells a story, explaining the root meaning of the word. It is that picture story and that root meaning that I am after when I study text of Scripture in its original Hebrew. For this one we will use some study tools available on the Internet.

“In the beginning God created the heavens and the earth.” Gen 1:1.

I want to discover the original Hebrew for “God:”

1) Look up the verse at the Blue Letter Bible. 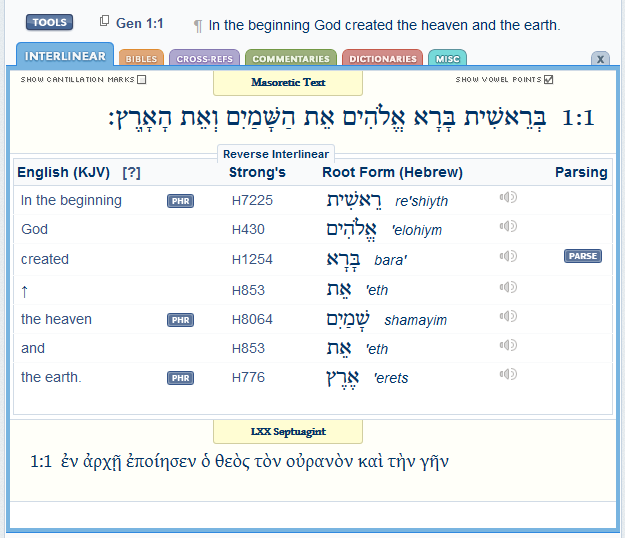 Original Hebrew! There is loads of information here for the Hebrew student. For now, we are going to keep it as simple as possible. My next task is to

3) Find the primitive root. Since I am interested in the original Hebrew for “God,” I will click on the associated link in the STRONG’S column, H430. This is the page which comes up: 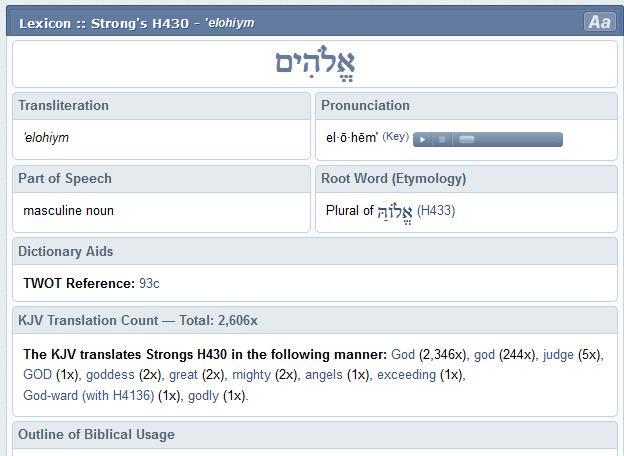 Now, the ancient root words are in 3-letter roots. It is the root I am interested in, if I want to discover the story being painted by the ancient pictographs. The Strong’s entry for Elohiym is telling me that I have not yet gotten to the root, for there is another word listed which the word comes from:, Strong’s H433. I make a mental note that Elohiym is the plural (meaning, more than one) of H433. So I click on it: 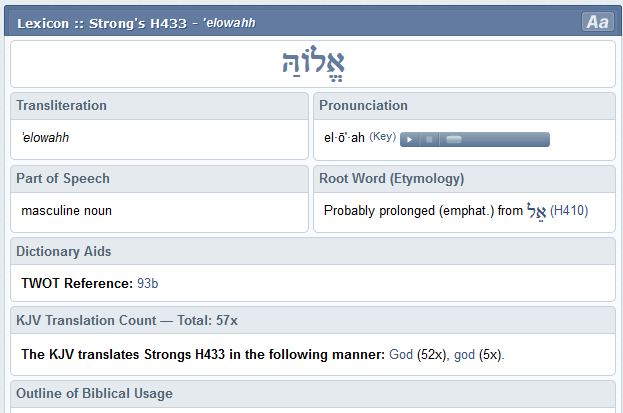 I have not yet gotten to the root! I make a note that Elohiym is the plural of the emphatic of H410. So I click on it: 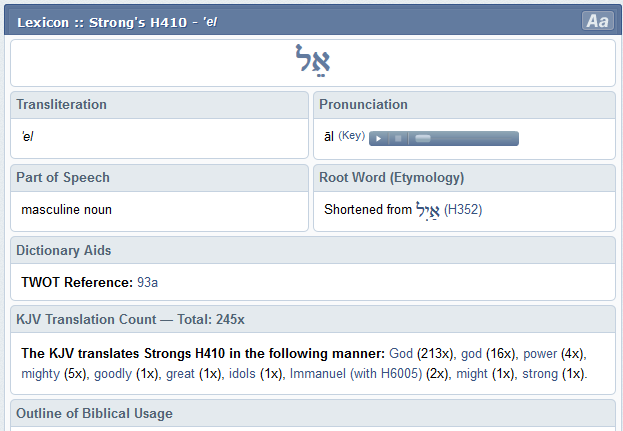 And I am not at the root yet! This is a shortened form of what we hope is the root, H352. So I click on it: 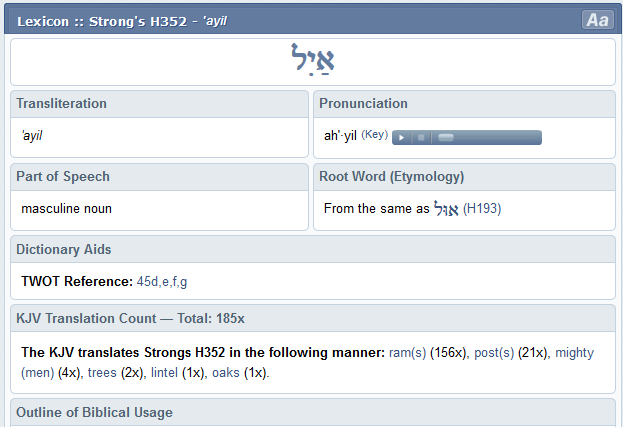 This is not yet a root. However it illustrates an important point. Every Hebrew root can be expressed in one of three ways: first, as a concrete object that can be seen with the eyes, what we would consider a noun. This is that expression, for Strong’s H352 denotes a ram, a male sheep. This is not yet the root, but is from the same as H193. So I click on it: 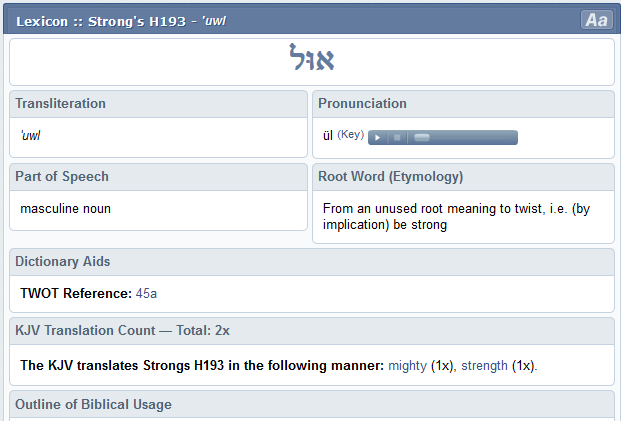 This is the Hebrew root expressed in its second form, as an abstract concept, in this case, strength. The third form, which is usually always the root, is as a verb. And so we discover that the root of Elohiym is from an unused verb, meaning ‘to be strong.’

The aleph was originally the pictograph of an ox head, with the meaning of strong, power, leader;

The vav was originally the pictograph of the tent peg, with the meaning add, secure, hook;

The lamed was originally the pictograph of the shepherd’s staff, with the meaning teach, guide, yoke;

The so then I look at the pictures, as if I were a five-year-old child, for God designed His original written word to be understood even by children. Unless we become as little children, we will by no means enter the kingdom of heaven, Amen? (Mat 18:3).

To be continued, in which we will look at more original Hebrew roots to find the story the pictographs are painting …