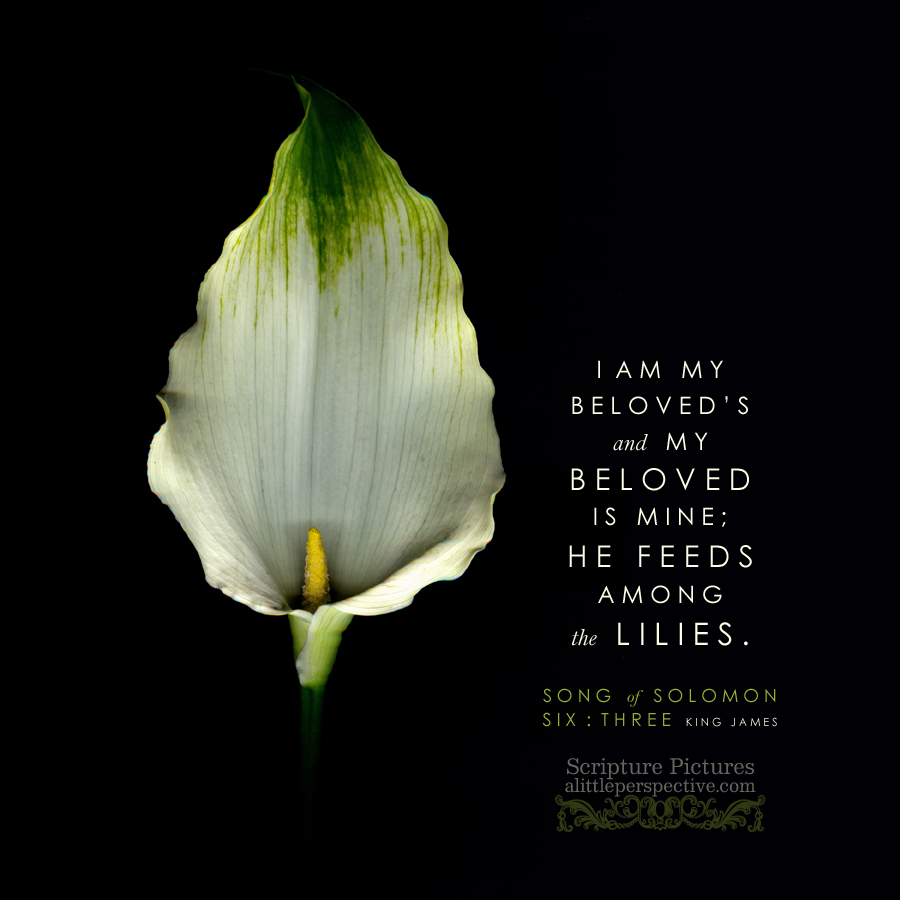 Read Song of Solomon 5 through 8 at Bible Gateway.

The Hebrew paragraph divisions (Fill in your own topics if you would like; I need to meditate longer than two days on the Song in order to finish my notes for it):

The whole book chiastic structure, needing more wisdom than I yet have to complete:

1c) Son 2:6-7 {s} The bride: he embraces me/ charge to the daughters of Jerusalem not to awaken love before its time;

1a) Son 3:6-11 {s} Solomon’s royal couch, perfumed with myrrh + frankincense, on his wedding day;
1b) Son 4:1-5, The bridegroom praises his bride’s beauty;
1c) Son 4:6, He anticipates going to the mountain of myrrh + hill of frankincense (lebona);
central axis) Son 4:7 {s} The bridegroom: “You are all fair, my love, and there is no spot in you;”
2c) Son 4:8, He invites his bride to him from the mountains of Lebanon;
2b) Son 4:9-11a, The bridegroom praises his bride’s love;
2a) Son 4:11b-5:1 {s+s} The bride, perfumed with the fragrance of Lebanon, is Solomon’s secret garden of spices; they consummate their marriage on his private couch.

1b) Son 6:4-7, The bridegroom praises his bride’s lovely countenance, awesome as an army with banners;
1c) Son 6:8, There are sixty queens and eighty concubines, and virgins without number;
central axis) Son 6:9a, My dove, my perfect one, is the only one of her mother, her favorite;
2c) Son 6:9b {s} The daughters called her blessed; the queens + concubines praised her;
2b) Son 6:10 {s} The daughters of Jerusalem praise the bride’s fair countenance, awesome as an army with banners;

2c) Son 8:3-4 {s} The bride: He embraces me/ charge to the daughters of Jerusalem not to awaken love before its time;

1a) Son 8:13-14 {p} Conclusion: the bridegroom’s longing for the bride, and their mutual happiness.

The Song is a mystery, but it is clear to me that it prophesies of the soon coming wedding day of the returning King of kings and His bride! Woot!