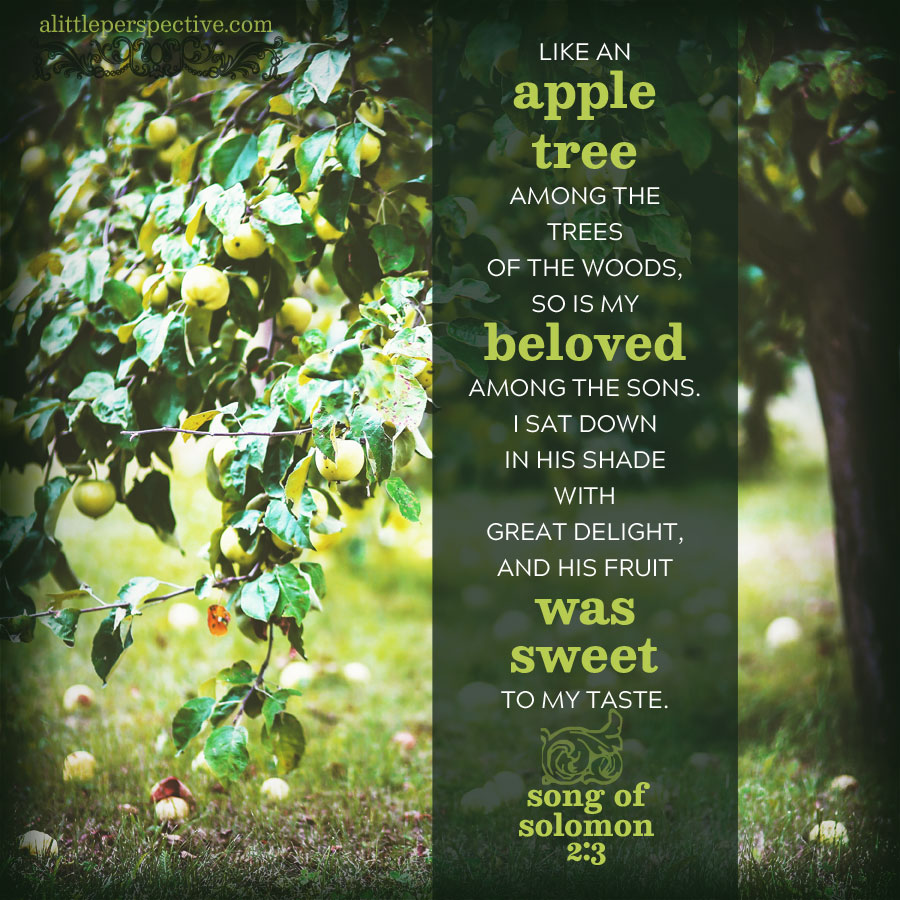 Read Song of Solomon 1 and 2 at Bible Gateway.

When we ended in 1 Kings yesterday, we read that Solomon had spoken 3000 proverbs and written 1005 songs (1 Kin 4:32). This song is the song of songs, the capstone of all his songs. The Jewish scholars say that this song is the 5 songs over the 1000, for the Hebrew paragraph divisions divide the song into five strong themes (which we will look at tomorrow).

The scriptures contain three books written by Solomon (along with Psa 72 and 127 included in the book of Psalms). Tradition has it that Solomon wrote the Song while young, to celebrate his wedding; that the Proverbs were compiled in the prime of his life, and Ecclesiastes when he was old and full of days.

The bride, in the Song, is called the Shulamite (Son 6:13) in my Bible, which is Strong’s H7759, its root, interestingly enough, is the same as shalom, and Solomon. It means, roughly, “daughter of peace,” just as Solomon can be understood to mean “prince of peace.” The footnotes in my Bible say she is a Palestinian young woman. Um, NKJV Bible translators, is your bias showing? (Yes, considering there were no such people as “Palestinians” in the ancient world, and are today a fabricated people group, Jordanians who were renamed Palestinians when Israel inherited the land.) I searched the Hebrew text for the identity of the “daughter of peace,” and found something glaringly obvious:

“I have compared you, my love, to my filly among Pharaoh’s chariots.” Son 1:9

Go forth, O daughters of Zion, and see King Solomon with the crown with which his mother crowned him on the day of his wedding, the day of the gladness of his heart. Son 3:11

Now Solomon made a treaty with Pharaoh king of Egypt, and married Pharaoh’s daughter; then he brought her to the City of David until he had finished building his own house, and the house of the Lord, and the wall all around Jerusalem. 1 Kin 3:1

The Shulamite is none other than the Egyptian princess, the wife of his youth, whom he received in marriage in a treaty with Pharaoh, which apparently included chariots as well. According to Ussher, Solomon married his Egyptian princess in 1014 BC. If she was Egyptian, it might explain her dark skin (Son 1:5),  especially, since Egypt and Nubia (Ethiopia) were aligned, if there were Nubian princesses in Pharaoh’s harem who had borne him children. Even Moses, prince of Egypt, had a Nubian princess for wife! (Num 12;1; Josephus explains the circumstances surrounding his marriage while he was still a prince of Egypt, showing that the practice of intermarriage between the royal houses of Egypt and Ethiopia was long- standing).

song of solomon 1-2, prophetic of messiah