You are here: Home / Bible Study / feasts of the Lord / significance of the new moon 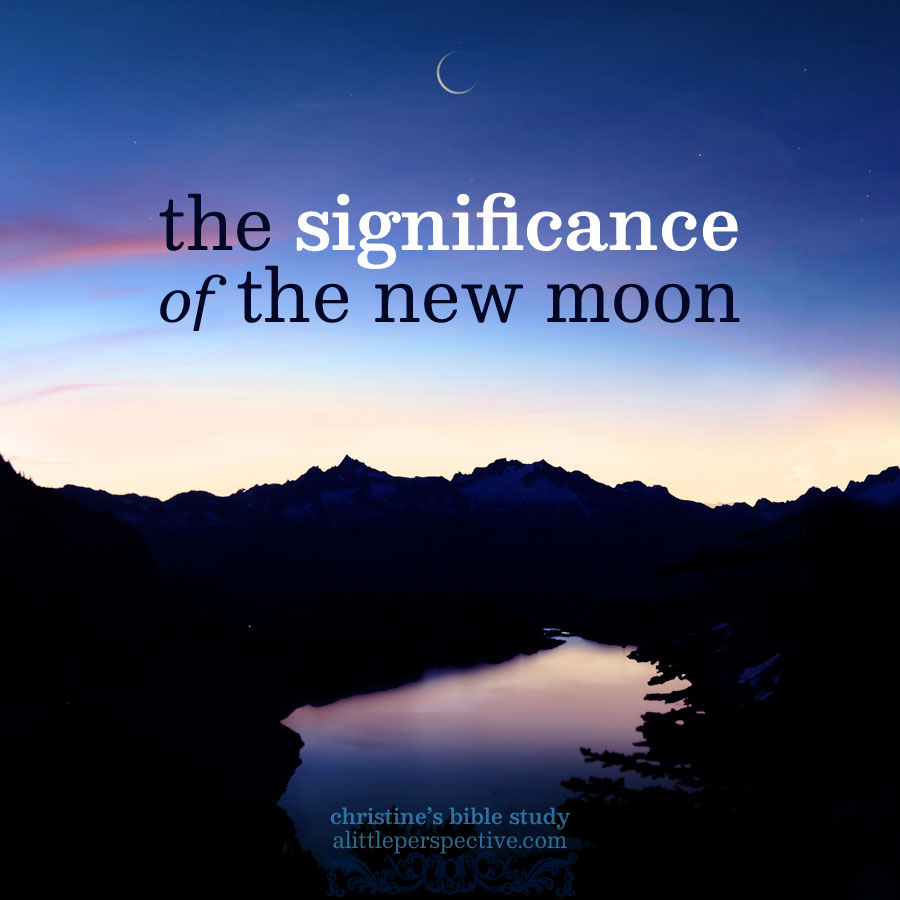 Tonight I am going to be looking for the new moon hanging in the western sky after the sun sets. I have a nice feast meal planned (which I really need to begin cooking once I am done with this blog post, LOL). I celebrate the new moons because it helps me keep track of the biblical year. This new moon will mark the beginning of the 12th month according to God’s calendar. That means the next new moon will mark the beginning of the 1st month, if the barley is in its head in Israel. And that means that Passover will be just around the corner.

God established the heavenly bodies (including the moon) for signs, seasons, days, and years. The Hebrew word for signs is oth, and it means a witness, an identifying mark. It is the same word used to mean a mark on the hand or the forehead, to indicate that one is either the Lord’s, or the antichrist’s. In this passage in Genesis, it might mean mark as in the way the star of Bethlehem marked, or witnessed, to the fact that the Messiah had been born.

The Hebrew word for seasons is moed, and it means literally an appointment. It is the same word used to mean a feast or holy day of the Lord in Lev 23. So the heavenly bodies do more than just serve as a giant cosmic clock or calendar. They let us know when God has established appointments with man, in a way that no human dictator or antichrist can alter.

And God did establish appointments and holy days with man, and told us what they were in His Torah, and commanded us to keep them. A characteristic of the antichrist is that he will also try to establish holy days. And they will be in opposition to the Lord’s holy days. For in Daniel it says concerning him:

“The fourth beast shall be A fourth kingdom on earth, Which shall be different from all other kingdoms, And shall devour the whole earth, Trample it and break it in pieces. The ten horns are ten kings Who shall arise from this kingdom. And another shall rise after them; He shall be different from the first ones, And shall subdue three kings. He shall speak pompous words against the Most High, Shall persecute the saints of the Most High, And shall intend to change times and law. Then the saints shall be given into his hand For a time and times and half a time.” Dan 7:23-25

One of the characteristics of the antichrist will be that he will seek to change the times and law. That is, he will seek to change the times, or according to Strong’s, the appointed times or seasons, and law, or according to Strong’s, the established decrees and law. It is God who established His appointments or seasons with man, and they are described in Lev 23. They are prophetic concerning the first and second comings of the Messiah. It is God who has given us His decrees so that we will know what is righteousness and what is not. And actually, many of those decrees are also prophetic concerning the Messiah, come to think of it.

And yes, the 4th beast, whom all commentators across the board say is the Roman beast, did seek to change God’s appointments. Even though Jesus and all the apostles rested on the seventh day and celebrated the feast days of the Lord, as can be easily ascertained by reading the Gospels and Acts, eventually the Roman church made it a crime to do so, and changed the day of rest from Saturday to Sunday, and replaced Passover with Easter, and the Feast of Tabernacles with Christmas, whose roots stretch back to the Tower of Babel rebellion against the worship of the Lord God Almighty.

So I mark the new moons, and celebrate Yeshua and make a feast on their day, so that I can know when the Passover is, and all the other feasts of the Lord which are subsequently determined by Passover. Because I have rejected the change in the times and the law instituted by the antichrist, and am bowing my knee to the Lord my God, Creator of heaven and earth.

« celebrating on the new moon
marked on the hand and forehead »