You are here: Home / Perspective / books and poetry / Saving the Harvard Classics to my Digital Library 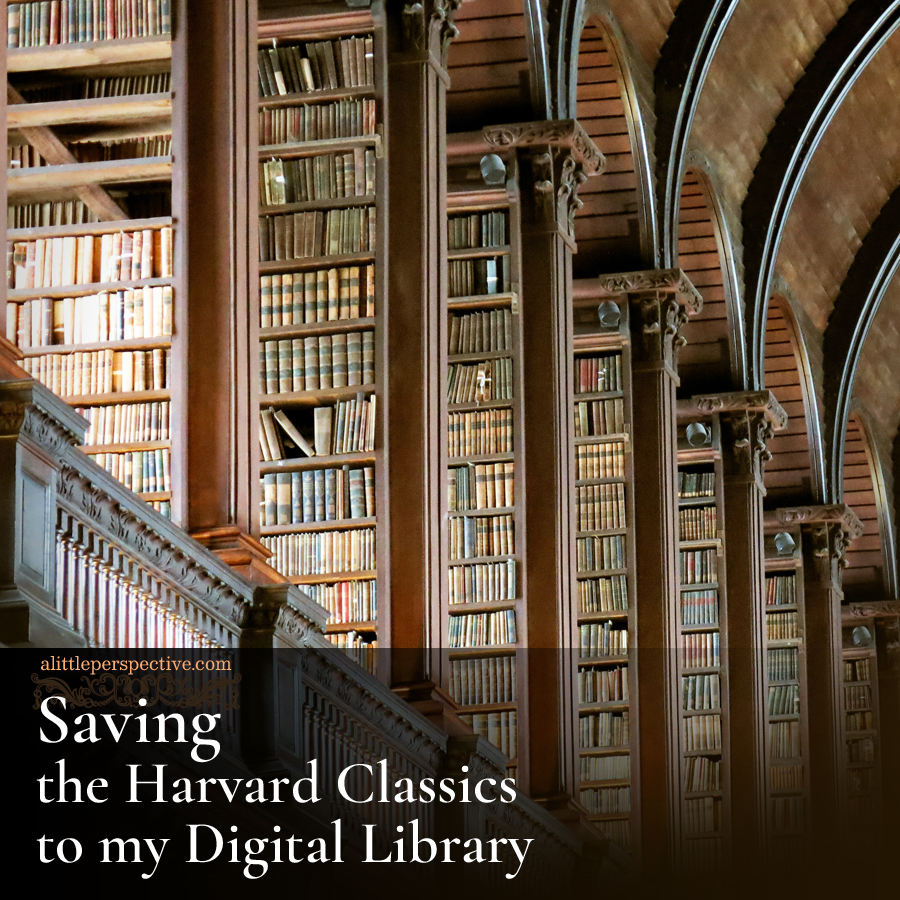 I have been unpacking books since my office has been repaired from hurricane damage, and new bookshelves installed. While I do so, I am downsizing – books that I can digitize go to my digital library, and those printed books get donated. It turns out all of the Harvard Classics are online at archive.org:

The Autobiography of Benjamin Franklin
The Journal of John Woolman
The Fruits of Solitude, by William Penn

The Apology, Crito, and Phaedo, by Plato
The Golden Sayings, by Epictetus
The Meditations, by Marcus Aurelius

Essays, Civil and Moral, and The New Atlantis, by Francis Bacon
Areopagitica and Tractate of Education, by John Milton
Religio Medici, by Sir Thomas Browne

Poems and songs, by Robert Burns

The Confessions, by Saint Augustine
The Imitation of Christ, by Thomas á Kempis

Agamemnon, The Libation Bearers, The Furies, and Prometheus Bound, by Aeschylus
Oedipus the King and Antigone, by Sophocles
Hippolytus and The Bacchae, by Euripides
The Frogs, by Aristophanes

On Friendship, On Old Age, and Letters, by Cicero
Letters, by Pliny the Younger

The Wealth of Nations, by Adam Smith

The Origin of Species, by Charles Darwin

The Aeneid, by Virgil

The Pilgrim’s Progress, by John Bunyan
The Lives of Donne and Herbert, by Izaak Walton

Stories from the Thousand and One Nights, translated by Edward William Lane, revised by Stanley Lane-Poole

All for Love, by John Dryden
The School for Scandal, by Richard Brinsley Sheridan
She Stoops to Conquer, by Oliver Goldsmith
The Cenci, by Percy Bysshe Shelley
A Blot in the ‘Scutcheon, by Robert Browning
Manfred, by Lord Byron

The Divine Comedy, by Dante Alighieri