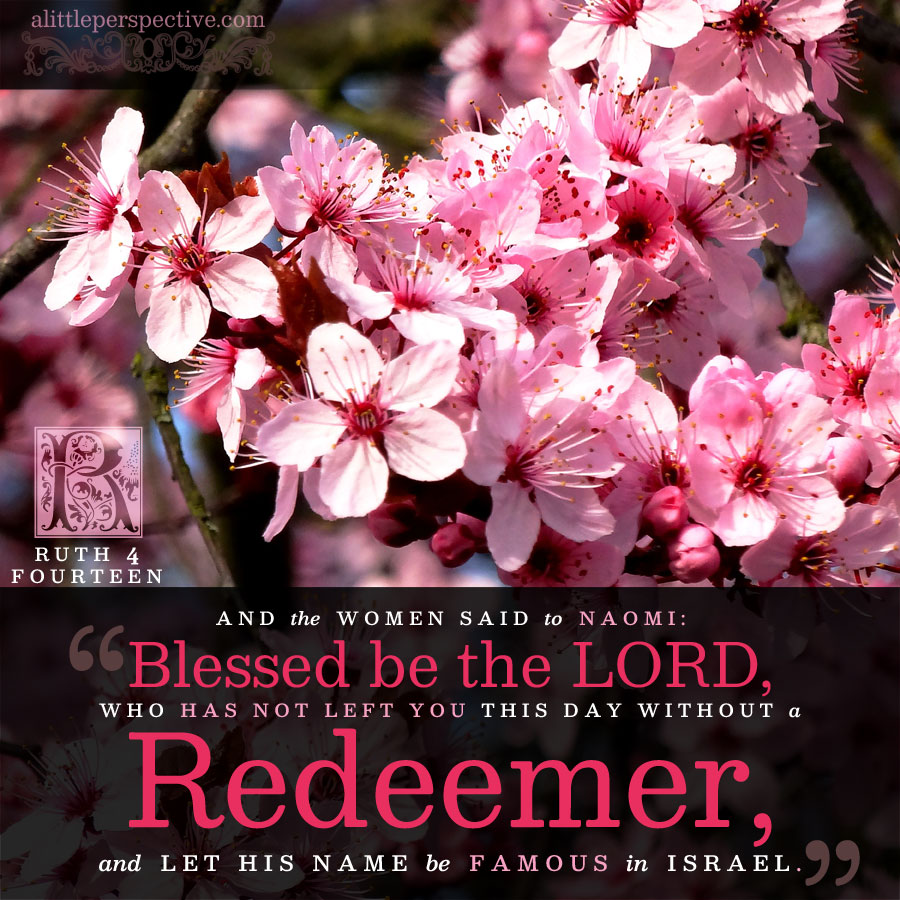 Read Ruth 3 and 4 at Bible Gateway.

Today in Ruth we continue the beautiful prophetic picture begun yesterday of the LORD God of Israel redeeming those who were not Israel, calling them to Himself, and making them as Israel without distinction. Ruth was a young woman, and beautiful, and as a widow she could have had her choice of any young man. But instead she chose Boaz, who was perhaps middle aged, a peer of Naomi. Boaz was unmarried and had no heirs. But although he was older than she, he was a good and righteous man, who knew the way of the Lord and walked in it. He was wise, prosperous, and a respected man in his city. He blessed Ruth for choosing him when she could have had her pick of the young men.

Boaz, through the custom of the day, redeemed Naomi and Ruth, since there were no sons to carry on the family. The concept of the kinsman redeemer is perhaps unique to Torah, and God placed it in Torah to teach us that He Himself is our Kinsman Redeemer! When a woman is left with no husband and no sons to carry on the family, to do the duty of husbands and sons for the women of the family, which is to provide for them, to preserve them, and to protect them, then the closest male kinsman is required by Torah to take the inheritance of the dead man, and his women, and redeem them from going to creditors or going to poverty, by purchasing the inheritance so the land and the women stay within the family and within the tribe.

The remarkable thing about Ruth, is that she is a Gentile! She is a Moabitess and not of Israel at all! But from the beginning her virtuous heart chose the God of Israel over the gods of her father’s house, and chose the people of Israel to be her people instead of her own pagan people, and then she chose Boaz, a father figure, to be her husband, who was her kinsman redeemer, instead of any of the young men of the city that she could have chosen.

God is teaching us, first of all, that He wants us! We are Gentiles (we were Gentiles), but we are not cast off because of that. For whoever among the Gentiles desires the LORD God to be his God, God desires that person to be His child and to be grafted in to His people Israel! He desires to cover us with His wing as Boaz covered Ruth with the corner of his cloak, and for us to find shelter under His wing as Ruth found shelter under the corner of Boaz’s cloak.

Next He is showing us that we are welcome in Israel – we become grafted in to Israel just as Ruth became grafted in to Israel through Naomi and through Boaz. But through Ruth we learn that we do not bring our Gentile past with us — we leave the land of the Gentiles and we leave the heritage of our father’s house, and we enter into a new land, the Land of His Kingdom, and we receive a new heritage, the heritage of our Father God. Many Christians today make the mistake of bringing the world with them into the assembly of the believers. The assembly of the believers is to be separate from the world, just as Israel is separate among the nations.

Third, God is teaching us that He is our Father, but He is also our Husband, for He is the Bridegroom who is returning for His Bride. Whatever male authority we need, who also loves us, and cares for us, He is it! Fourth, He is our Redeemer who redeems us from being alone in the world, adrift, without provision, without protection, from being lost as an inheritance among His people!

And Ruth and Boaz were the great- grandparents of David the shepherd boy who defeated Goliath with a stone and a slingshot and His faith in God; and became King David, the man after God’s own heart, and the ancester of Yeshua the Messiah, the eternal King of the whole earth!

Every year at the Feast of Tabernacles, the book of Ruth is read to this day, in synagogues throughout the world, to remind the Jews that the God of Israel is not the God of Israel alone, but the God of the whole earth, and like Ruth, the nations will come and worship the LORD God of Israel, Creator of heaven and earth!