You are here: Home / Bible Study / grace/ faith and law/ works / romans 7, dead to the law 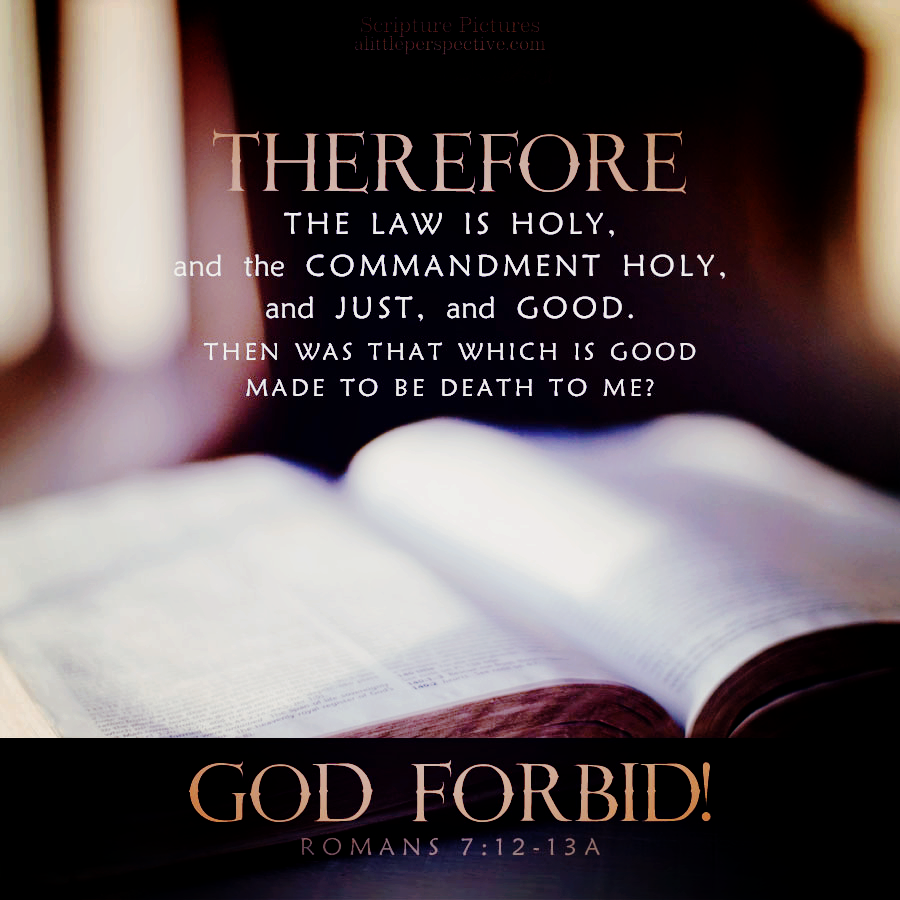 Since we asked from Gal 2 what does Paul mean when he says he is dead to the law, let us take a detour to Rom 7 and examine its meaning:

Therefore, my brethren, you also have become dead to the law through the body of Christ, that you may be married to another—to Him who was raised from the dead, that we should bear fruit to God. For when we were in the flesh, the sinful passions which were aroused by the law were at work in our members to bear fruit to death. But now we have been delivered from the law, having died to what we were held by, so that we should serve in the newness of the Spirit and not in the oldness of the letter.Rom 7:4-6

Paul has not left his topic, which he began in Rom 2: that is, that when we try to obey the law from our flesh, the fruit that is produced is sin and death. For no one can obtain righteousness by the works of the flesh and observance of the law! This is Paul’s central point which we cannot forget!

But in contrast, when we by nature do what the law requires, because God has recreated us with a new nature, with His nature, our obedience (of the righteousness that the law defines) proceeds from the resurrection life which we have from Jesus Christ (who obeyed the law in righteousness leading to life), and the fruit that is produced is obedience and life!

So when Paul says we have become dead to the Law, does he mean that God’s instruction in righteous living no longer applies to us? This is the interpretation the churches are making who ordain homo[s-x]ual pastors who are living with their partners. But how can it be right, when Paul just instructed us that we ought to present our members as slaves to obedience leading to righteousness? To what does Paul suggest we become obedient? Of course, that which God has said! What He has voiced, His Word, which contains His Law! It is the instruction or teaching in righteousness, which is not sin, which is holy and just and good, and which is even spiritual. Of course it has to be, since the Word came forth from the mouth of God, by the Spirit of God! God’s Word and His Spirit agree, and His Word, which is Torah, which is Messiah, is not divided against Himself to cross purposes!

I believe Paul is saying that we have become dead to trying to obey the law from our flesh, through the body of Messiah! We lay down our own flesh, because the body (flesh) of another has allowed us to lay it down! Through the body of Messiah, we have access to God’s righteousness now, and we are free from needing to establish our own righteousness by works of obedience to the law!

Because we have died, we can now be married to another – our relationship to God is now just that, a relationship, rather than a religious system, which is what anything done out of the flesh becomes. The fruit we bore when we were under law, when we were in the flesh, i.e., when we were trying to establish our own righteousness by the working of the flesh to obey the law, was self- righteousness, pride, sin, and death. Now that we have been delivered from the law, i.e. delivered from having to obey the law in order to try to establish our own righteousness, the fruit which we bear to God, now that we are under grace, and our righteousness is of God and not of the flesh, is true fruit! (Gal 5:22-23).

Now instead of serving in the oldness of the letter – having to obey the law from letters written on tablets of stone outside of our hearts – we are serving in the newness of the Spirit – we are obeying the law from a new heart in which the Spirit has written the law on the tablets of our hearts, inside our hearts. (Eze 36:25-27). We are still serving the same God who has not changed, whose definitions have not changed, and whose Word has not changed! What pleases Him has not changed! What has changed, is us! Instead of trying to serve Him from our flesh and failing, now we are serving Him from our hearts by the Spirit, by grace, by new life, and succeeding!

I cannot reiterate enough, that God’s Word and His Spirit agree with each other! God is looking for worshipers who worship Him in Spirit and in truth (Joh 4:24)! Truth is expressed by God’s Word, and God’s Word has been breathed by His Spirit! As Paul takes pains to clarify, it is not His Word, which includes His Law, which is the enemy. His Law is not sin, His Law is Spirit(ual), His Law is holy, His Law is just, His Law is good! In other words, His Law is an expression of His nature, in both righteousness and mercy!

Look at it this way: Torah and Messiah are one! For Messiah is the Word (Joh 1:1, 14), and all of Torah preaches Messiah (Joh 5:45-46)! Why did God establish a Law of Substitutionary Sacrifice if He was not by that Law teaching mercy and forgiveness through Messiah’s substitutionary sacrifice? Why establish a Law of Sabbath Rest if He was not by that Law teaching rest from work(s of the flesh) through Messiah? He was! All Torah is prophetic of Messiah and moreover expresses Messiah. We have to remember that the heart of the tabernacle in the wilderness was the mercy seat (which covered the tablets of the Law contained within the ark)! Torah is not our enemy, dear believers in Yeshua Messiah who are saved by grace through faith! It is Torah which prophesies and reveals such salvation!

Now, since we have so great a salvation, which was freely gifted to us, let us not dishonor Him who saved us by continuing to live in sin, and continuing to be willfully ignorant of God’s definition of righteous behavior contained in Torah! Let us truly leave behind living like Gentiles (Eph 4:17-24), for by the blood of Jesus we are Gentiles no longer (Eph 2:11, Rom 11:17)! Let us live as who we are, Israel in covenant with YHVH (Eph 2:11-13)!

Back to Galatians tomorrow …

Continued: galatians 3:1-9, what saves a man