You are here: Home / Bible Study / romans / romans 15, receive one another

“We then who are strong ought to bear with the scruples of the weak, and not to please ourselves.” Rom 15:1

“Therefore receive one another, just as Christ also received us, to the glory of God.” Rom 15:7

Now in this chapter Paul is concluding his argument that he began in chapter 14, as we saw with the chapter 14 chiastic structure:

He began his discourse on receiving one another, both the strong and the weak, in these verses, and spent chapter 14 explaining his reasoning, then in chapter 15, he is concluding his discourse.

Back to chapter 14: The one who believes he may eat all things, we can infer is the strong, because the weak eats only vegetables. We saw that Paul defines “all things” for us later in the chapter (remember he is answering a specific question the Romans asked him, and we do not know what the question was, but Paul is assuming that they do, therefore he does not restate the question or explain what his topic is for our benefit. We have to do some detective work to not misunderstand him).

(More on Romans 14 and the clean and unclean food question here.)

Both of these questions – which are doubtful things, not clearly explained in Scripture already – have to do with what a believer does in his pagan culture which constitutes idolatry. Paul lumped them together because it was the same kind of question, dealing with the same spiritual principle.

Idolatry comes from the heart. The believer who knows – who has faith – that his heart is pure before God and that he gives no place in it in devotion to idols, is strong. He can eat vegetables AND meat, he can visit his mother’s house on “the day” in order to honor her even though she has the place decked out in eggs and bunnies. The believer who is not fully convinced in his own mind, is weak. He is not sure that eating a lamb chop which has been sacrificed to an idol does not honor that idol, so he eats vegetables only. He is not fully convinced that visiting his mother on “the day” when her house is decked out in eggs and bunnies, is not honoring that idol, so he stays home and observes not “the day” in order to honor the Lord.

Before we misunderstand: the definition of strong is not one who does anything, and the definition of weak is not one who refrains from doing some things. The strong is the one who is fully convinced in his own mind, and the weak is the one who has doubts. I believe the strong have an extra responsibility, not only to not cause others to stumble, but also to be certain that their convictions are firmly rooted in the truth, in Scripture. It is not a crime to be weak. It is not a crime to be unsure because you are still learning, and to know there are some things you don’t know yet. It is not a crime to err on the side of caution. Remember that Daniel ate only vegetables so as not to transgress the dietary commands of Torah, and he is a mighty man of faith (Dan 1, Heb 11:33). 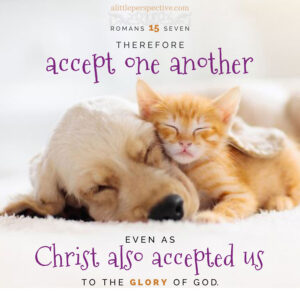 Christ is our example. He received us while we were still sinners and as ignorant of His Word and His ways as the day is long. With open arms! The Greek word “receive” is Strong’s G4355, proslambano, to take to one’s self, as one’s companion, into one’s home, to grant one access to one’s heart, to take into friendship and intercourse! Wow! Let’s extend that reception to each other, Paul is saying, not making divisions and exclusions over doubtful things!

Now, let’s remember this admonition applies to differing personal convictions in issues which are doubtful things. Those things which are clear in Scripture are not doubtful, and Paul chastised the Corinthians, for example, for retaining in fellowship a believer who was having relations with his father’s wife, a clear violation of Scripture (1 Cor 5:1-2).

Continued: romans 16, those who cause divisions

« speaking wickedness
the things which are not »