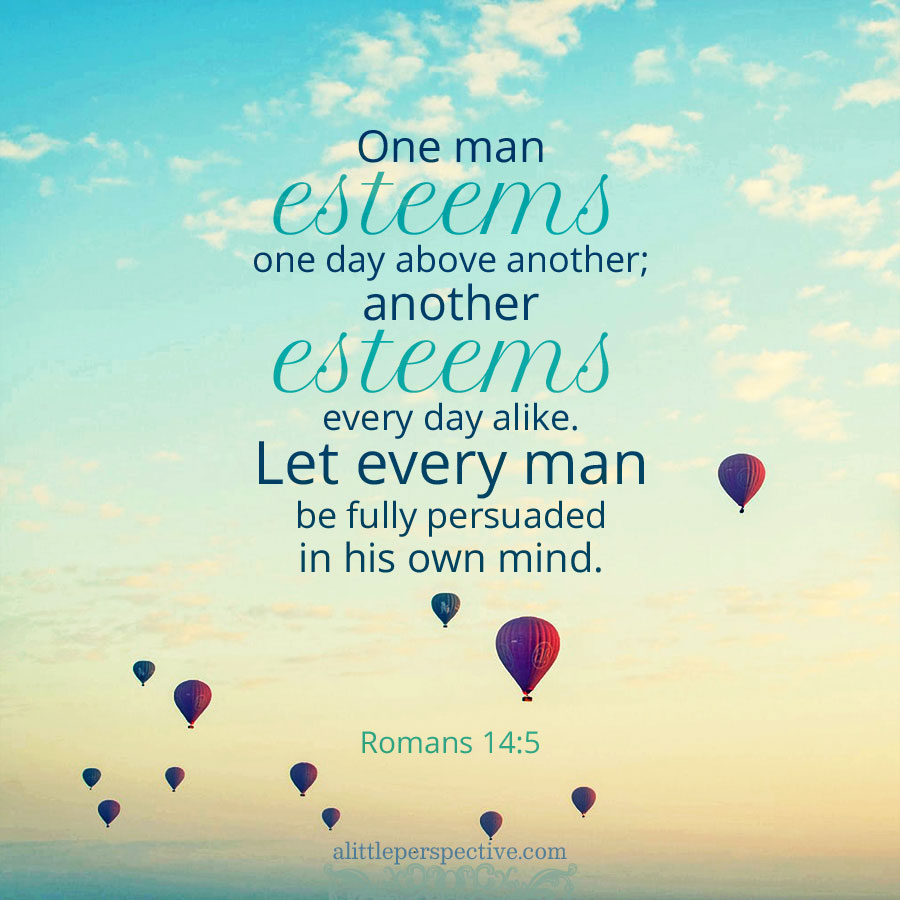 The Greek word translated “above” in verse 5 is para, a common preposition which is not translated “above” in the New Testament except for here. As an example, remember that the Greek for the Holy Spirit is Parakletos, the Helper? Literally, The one who comes beside (para). The preposition can mean different nuances of from, beside, by, with, at, or of depending on the grammar of the noun which is its object. The normal Greek preposition which denotes a position above, is huper, which is not in this sentence.

Para can sometimes mean more or less than. For example,

“Collect no more than [para of the accusative] what is appointed for you.” Luk 3:13

“From the Jews five times I received forty stripes minus [para of the accusative] one.” 2 Cor 11:24

To further complicate things, “one” is not in the Greek, nor is “alike.” So the Greek just as it is reads:

“One person esteems a day (more or less than, translated “above”) another; another esteems every day.”

To the non- Jews who were translating the Bible centuries after its events, esteeming every day made no sense, but they were familiar with esteeming one day more than or above another – an obvious reference to the Sabbath. They added the “alike” for clarity, because it made more sense to them with it in. So back to whether one day is above another or not in a minute. What does esteeming every day, taking out the “alike,” mean?

We know now, what maybe the original translators from the 1600s didn’t know then: that in the pagan culture in which Paul lived, among the Gentiles which were Paul’s mission field, every day was dedicated to a different god. Sunday was the first day of the week and thus dedicated to the sun god as the most important god in the pantheon. This is why where I live, on Sunday evenings, the pagans gather at the beach to venerate the sun as it sinks into the Gulf of Mexico. Still today! So on Sunday, the devout pagans sacrificed to the sun god. Monday was dedicated to the moon god, (moon day), so on Mondays the pagans sacrificed to the moon god. Tuesday was dedicated to the war god (Ares in Greek, Tiw in Saxon, so Tiw’s day) and so on through out the week.

This might be what Paul means when he says others esteem every day. It does not necessarily mean that every day is esteemed alike. That changes the meaning of the original, to make it seem as if no days were esteemed at all, and that was not happening in his place in his time. That happens in our culture in our time, but not in his. We have to remember the first rule of Bible interpretation: CONTEXT!

« the anger of man
you who are spiritual »