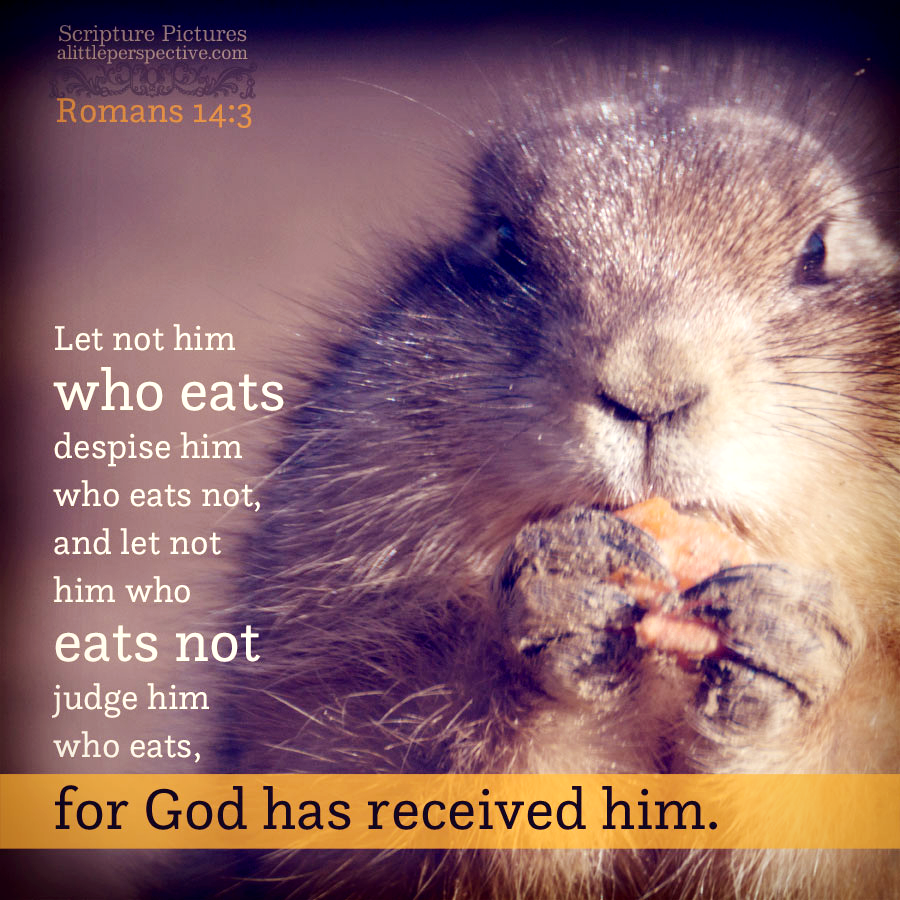 What was the meat- eating issue the early Church grappled with, which was not clearly addressed in Scripture, so that it was a true gray area, a dispute over doubtful things?

In order to understand the problem, you have to understand what it was like to live in the Roman Empire outside of Judea and Samaria in the first century. The cities abounded with temples to pagan gods like we have churches on every street corner in America. Sacrifices flowed into the temples. When an animal was sacrificed, what was left (after the worshiper took his portion) was sold to the butcher shops. Every butcher shop in the Empire procured its meat in this way.

So a believer in the Lord Jesus Christ entered a butcher shop, bypassed the pork and rabbit automatically, looking for a good chicken or a haunch of beef. But wait … that chicken, that bull, has been sacrificed in a pagan rite by a pagan priest to a pagan god in a pagan temple. Does the believer buy it and eat it? If he did, would he be honoring the idol to which it had been sacrificed?

“I know and am convinced by the Lord Jesus that there is nothing unclean of itself; but to him who considers anything to be unclean, to him it is unclean. Yet if your brother is grieved because of your food, you are no longer walking in love. Do not destroy with your food the one for whom Christ died. Therefore do not let your good be spoken of as evil; for the kingdom of God is not eating and drinking, but righteousness and peace and joy in the Holy Spirit. For he who serves Christ in these things is acceptable to God and approved by men.” Rom 14:14-18

Now is this proof that the clean and unclean food division has been done away with? It would be, IF that assumption was confirmed by the rest of Scripture. If it is not, then we have not arrived at the proper understanding of the verse. But Paul himself does not confirm it, for he reiterates that Scripture has declared some things unclean in other places in his letters:

“Therefore God also gave them up to uncleanness, in the lusts of their hearts, to dishonor their bodies among themselves,” … Rom 1:24

“And what agreement has the temple of God with idols? For you are the temple of the living God. As God has said: “I will dwell in them and walk among them. I will be their God, and they shall be My people.” Therefore “Come out from among them and be separate, says the Lord. Do not touch what is unclean, and I will receive you. I will be a Father to you, and you shall be My sons and daughters, says the LORD Almighty.” Therefore, having these promises, beloved, let us cleanse ourselves from all filthiness of the flesh and spirit, perfecting holiness in the fear of God.” 2 Cor 6:16-17:1

“… lest, when I come again, my God will humble me among you, and I shall mourn for many who have sinned before and have not repented of the uncleanness, fornication, and lewdness which they have practiced.” 2 Cor 12:21

In light of the these Scriptures, obviously the interpretation of Rom 14:14 is not that all things are now clean, for Paul believes that those things which the Scripture has declared to be unclean, are unclean — it is from the Scripture that he is getting his definition of what constitutes uncleanness and all filthiness of the flesh. And that is the key: it is not what Scripture clearly defines as unclean that is now clean in and of itself. But all things that man might declare to be unclean, are clean in and of itself. If a thing was intrinsically unclean, Paul is saying, God would have declared it to be so.

I believe this interpretation of the text harmonizes with what Paul has written in the other epistles, and also what we saw Jesus saying in the Gospels (Mar 7, Mat 15, Luk 11).

Why didn’t Paul just say so in the first place, and not leave himself open to misunderstanding? He was answering a specific question addressed to him by the church at Rome. He could not have known that their letter would have been lost, and his preserved, and used to prove the immutable Word of God contained in the Old Testament passed away 2000 years later.

I am indebted to an article written by Brad Scott at Wildbranch Ministry for putting me on the right track of Romans 14.

« the heart which loves virtue
the anger of man »