You are here: Home / Bible Study / revelation / Revelation 18, On Pharmakeia 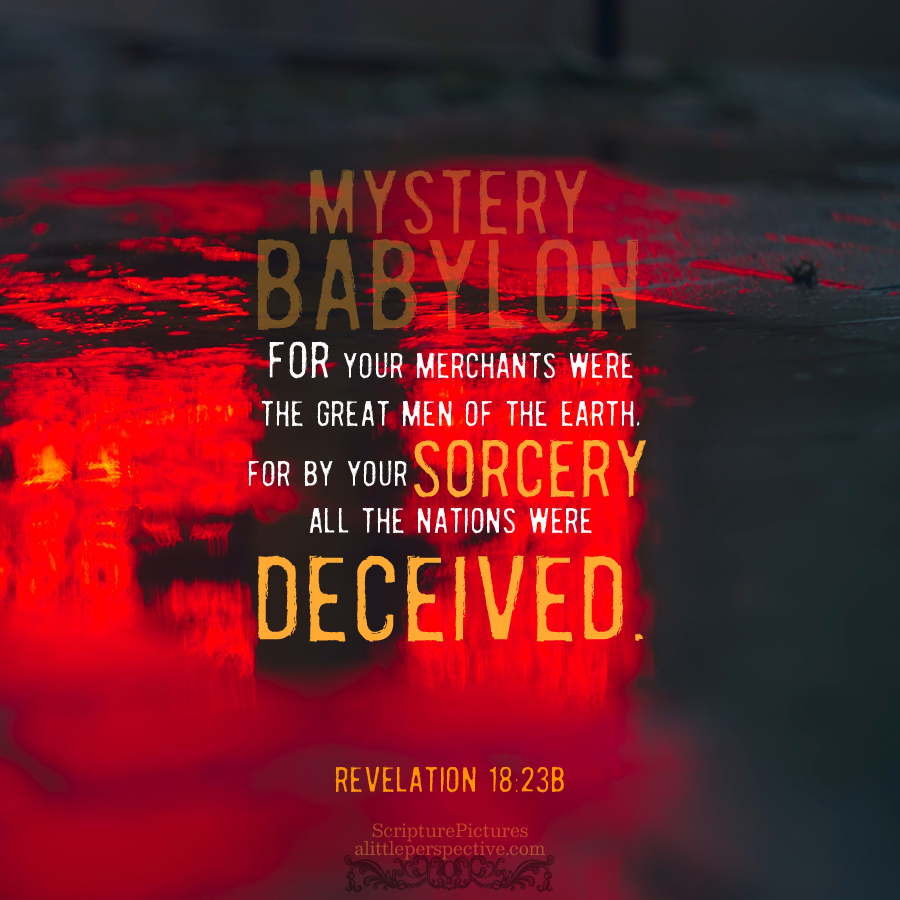 The light of a lamp shall not shine in you anymore, and the voice of bridegroom and bride shall not be heard in you anymore. For your merchants were the great men of the earth, for by your sorcery all the nations were deceived. Rev 18:23

Sorcery is in Greek, Strong’s G5331, pharmakeia, φαρμακεία, a noun meaning, the use or administration of drugs; poisoning; or sorcery, witchcraft fostered by idolatry. It occurs three times in the Greek Testament. Here, in Rev 9:21, and Gal 5:20.

And they did not repent of their murders or their sorceries or their sexual immorality or their thefts. Rev 9:21

Now the works of the flesh are evident, which are: adultery, fornication, uncleanness, lewdness, idolatry, sorcery, hatred, contentions, jealousies, outbursts of wrath, selfish ambitions, dissensions, heresies, envy, murders, drunkenness, revelries, and the like; of which I tell you beforehand, just as I also told you in time past, that those who practice such things will not inherit the kingdom of God. Gal 5:19-21

In all the occurrences of pharmakeia in the Greek Testament and in ancient Greek literature, a substance is used to manipulate the outcome. Substances can be natural and God-given, as when someone makes elderberry tea during cold and flu season; or occultic. Has anyone seen the cartoon of witches stirring a cauldron? And what are they stirring, but a ‘potion,’ a pharmakeia of their own design, to manipulate an outcome.

Gesenius says the root can also mean “to hide,” and the Ancient Hebrew Lexicon corroborates this meaning. The related words of veil (hiding the hair or face of a woman), lizard (a hidden reptile), secret (hidden from common knowledge), and wrap (enclosing something which hides it from view) bring out the common thread of something hidden. The story the pictographs are telling is of authority (lamed) that is wondrous or supernatural (hey) which surrounds (tet, or hides, as a wrap which surrounds hides what it wraps from view).

This word occurs only twice [in this form] in the Hebrew Bible:

Why is this word used to mean both the flame of the Cherubim, and the secret arts of the Egyptian magicians? The wondrous action of the Cherubim, whatever it was, was a sign of spiritual authority which hid the way to the tree of life. The arts of the magicians were accomplished through real spiritual authority, not of God, but of the occult, which was hidden or secret from common knowledge. According to Webster’s Dictionary, the word occult means, “to shut off from view or exposure, to cover.”

The word also occurs in another form, from the same primitive root:

And the magicians of Egypt did so with their enchantments: and Pharaoh’s heart was hardened, neither did he hearken to them; as YHVH had said. Exo 7:22

And the magicians did so with their enchantments to bring forth lice, but they could not: so there was lice on man, and on beast. Exo 8:18

Someone asked, Are all prescription drugs bad? Why is the symbol for the medical establishment always a snake wrapped around a pole? My answer to the first, is, please pray about the prescriptions you or your family are taking. Do they mask symptoms, or heal root causes? We should be seeking healing, not masking, which is, by the way, a covering over to hide from view. My answer to the second, is that Moses lifted up the bronze serpent wrapped around a pole in the wilderness, which Yeshua said was an event prophesying of His own death for the forgiveness of sins. The Greeks co-opted this symbol for their own idolatry.

In Revelation, the time we are in the book, the event of the Fall of Babylon, – this is the context of the vision – it will be revealed that Mystery Babylon hijacked legitimate medical research to introduce pharmakeia, or sorcery, into the world’s population at large. If anything the pandemic and the censoring of legitimate cures revealed the ties between chemistry, drug companies, and global elites who fund the engineering of diseases and then patent the “cures.”