You are here: Home / Family / marriage / removing obstacles to unity, part one 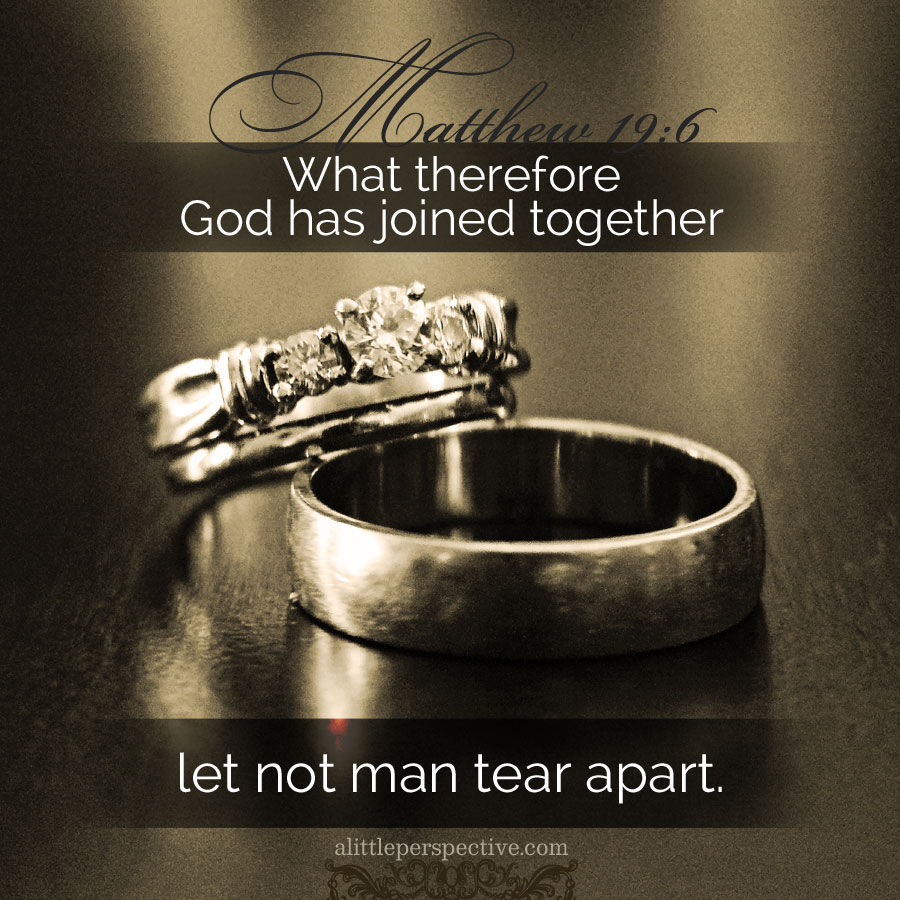 When I was studying the Law of marriage from Torah, God continually took me back and forth, from Torah to the New Testament, from the New Testament to Torah. Why? Because I was not the only one who questioned whether God could really mean, one man and one woman for life, no outs. The Jews questioned Jesus about it (more on that coming up), and the churches questioned Paul about it. In fact, Paul’s answer to the Corinthians, in the marriage chapter of 1 Cor 7, forms a chiastic structure:

central axis) 1 Cor 7:15, If the unbeliever departs, let him depart; God has called us to peace;

When he says, “A wife is bound by law as long as her husband lives,” (1 Cor 7:39, the 2a pair), where did he get that idea? And what law is he speaking of? He is not speaking of the civil or criminal law of the Greeks (this letter is to the Corinthians after all), because in Greek and Roman civilization at that time, there was no such law. Especially in the cosmopolitan areas of the Roman Empire, divorce was a common occurrence. The Law the wife is bound by, is the Law of God, which God has revealed in Torah – the Law of marriage, that the door is strongly fenced.

The c pair reiterates that once you marry, the wife is not to leave her husband, and the husband is not to divorce his wife. Would you be free of the the Law of marriage? Then do not marry. Never mind the pagans, first century Jews had trouble with this aspect of the Torah Law of marriage, and questioned Jesus about it (Mat 19:3-12). So we come to our first loophole:

“When a man takes a wife and marries her, and it happens that she finds no favor in his eyes because he has found some uncleanness in her, and he writes her a certificate of divorce, puts it in her hand, and sends her out of his house,” Deu 24:1

There was a school of thought among the Pharisees at that time, which taught that a man could divorce his wife for any reason that she might find no favor in his eyes. Any reason (Mat 19:3). Another school taught that it applied to uncleanness only. If she has been immoral, and has not kept herself for her husband alone, but gives herself to another, then it is permitted the husband to divorce his wife (Mat 19:3-9). But even this, Jesus tells us, is because of the hardness of the husband’s heart, for from the beginning the man and his wife were united (echad) – there was no exiting the strongly fenced door. He reaffirmed that marriage was meant to be a permanent state, till death do you part. That is why the command, Do not divorce, is from the Lord (1 Cor 7:10-11, the 1c pair).

The Jews in Jesus’ day had trouble with this because it goes against the grain of human nature. Things get hard, your spouse gets difficult, so the human solution is to withhold affection (contrary to the Law of marriage, which is to render affection, 1 Cor 7:1-7, the 1a pair). The human solution is to dump the person and get a new spouse. Until things get hard with the new spouse, and the new spouse gets difficult. Then what?

Could it be possible, that the Lord gave us marriage, and the Law of marriage, as a gift, to teach us and to help us rise above our selfish human nature? In order to overcome our own hardness of heart? In order to obey the Law of marriage, if someone has set their heart on obedience, selfish desires, my needs, and me me me have to be put on the back burner. Husbands and wives, in order to remain married and live in peace, have to forgive, and let their mercies be new every morning. Husbands and wives have to lay down their lives to meet the needs of another, to love another better than they love themselves.

And here, in marriage done according to the Law of marriage, we have a picture of the love of Messiah for His people. Is your spouse making you unhappy today? Do what the Lord did for us: seek to serve instead of be served, and dwell on what you can do to make your spouse happy, not what your spouse is or is not doing to make you unhappy. Change your focus, shift your perspective, and ask the Lord to make you the agent of peace in your home.