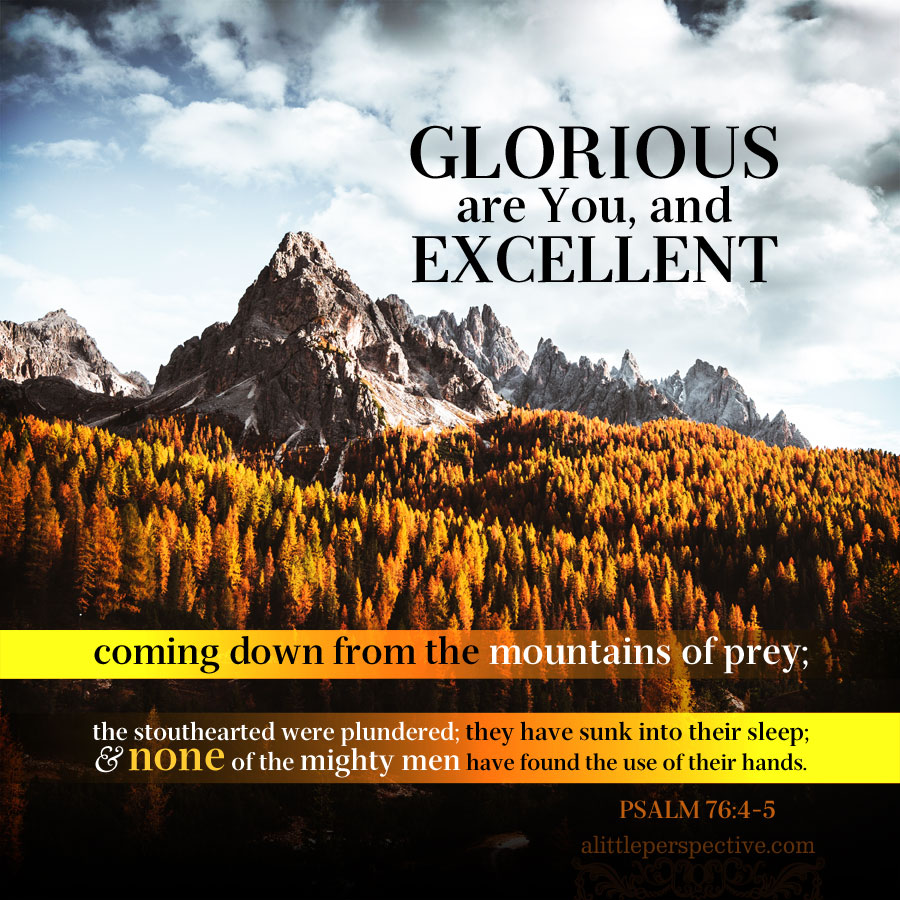 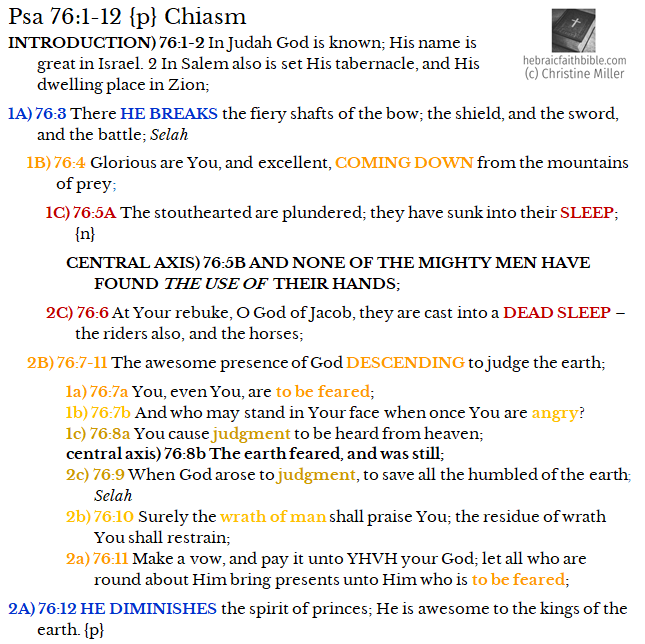 Something to note: the verb tenses in the NKJV translation are nearly all past: He broke the fiery shafts, He diminished the spirit of the princes, referring back to His great victory over Pharaoh cast into the Red Sea. In the JPS, the Hebrew Bible in English, the verb tenses are all present tense or continuing tense. His action is not over, it is ongoing.

A PAIR. He breaks, He diminishes. He breaks into pieces all the agencies of war; and who wages war? The kings of the earth. Now the kings and princes have exalted their horn, their authority, in YHVH’s face, as per Psa 2. They have raised up, or made bigger, their own status. He diminishes, or makes smaller, that which they have made bigger. The verb is literally, to shorten by clipping, as a haircut, so the verb is sometimes translated, to cut off.

Our modern English doesn’t accurately portray “awesome.” The root is Strong’s H3372 ירא yare, a primitive root meaning, “to fear.” That is, to reverence that which is above yourself as the greater. The fear of YHVH is more than just respect, however:

For we know Him who said, “Vengeance is Mine, I will repay,” says the Lord. And again, “The Lord will judge His people.” It is a fearful thing to fall into the hands of the living God. Heb 10:30-31

It is actual fear, a cold dread that grips the heart of all who are at odds with Him. His glory is so great that if it were not filtered or concealed it would slay men. His wrath is terrible, that is, terror-inducing, precisely because it is just, and inescapable. It finds you no matter what you do to hide from it. To be awesome to the kings of the earth does not mean they go around high-fiving each other, “Isn’t this awesome!” It means He will be revealed to them so that the awe of Him descends upon them, and they quake in their boots, knowing what they have done to defy Him.

B PAIR. The same fear, Strong’s H3372 ירא yare, is the root of all the fears in this section. His fear makes the earth stand still because His judgment, or sentence cast in a court of law, is decreed upon all who have oppressed, or made humble, brought low, the vulnerable, who should have rather been cared for.

JUDGMENT. Strong’s H4941 mishpat, an abstract concept meaning, “a judgment (the act of deciding a case);” from Strong’s H8199 שפט shaphat, “to judge or govern.”

C PAIR and CENTRAL AXIS. The mighty sleep, that is, fall unconscious. They are in a state of inaction. They are so stunned that their hands become nerveless and can no longer hold their weapons. Their days of oppression are over!