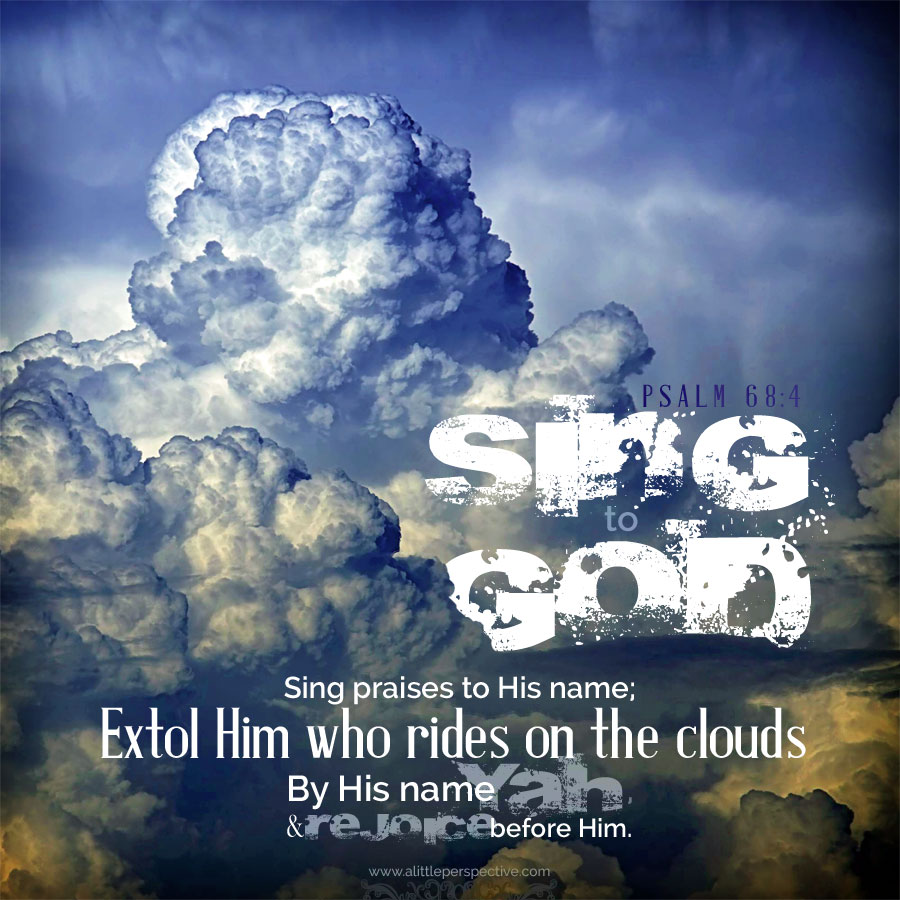 1 Let God arise, Let His enemies be scattered; Let those also who hate Him flee before Him.
2a As smoke is driven away, So drive them away; {n}
2b As wax melts before the fire, So let the wicked perish at the presence of God.
3 But let the righteous be glad; Let them rejoice before God; Yes, let them rejoice exceedingly.
4a Sing to God, sing praises to His name; {n}
4b Extol Him who rides on the clouds, By His name YAH, And rejoice before Him.
5 A father of the fatherless, a defender of widows, Is God in His holy habitation.
6a God sets the solitary in families; He brings out those who are bound into prosperity; {n}
6b But the rebellious dwell in a dry land.
7 O God, when You went out before Your people, When You marched through the wilderness, Selah
8a The earth shook; The heavens also dropped at the presence of God; {n}
8b Sinai itself trembled at the presence of God, the God of Israel.
9 You, O God, sent a plentiful rain; When Your inheritance was weary, You confirmed it.
10 Your flock settled therein; You, O God, provided from Your goodness for the poor.
11 The Lord gave the word; Great was the company of those who proclaimed it:
12 “Kings of armies flee, they flee, And she who remains at home divides the spoil.
13a When you lie down among the sheepfolds, {n}
13b The wings of the dove are covered with silver, And her feathers with the shimmer of gold.”
14 When the Almighty scattered kings in it, It snows in Zalmon.
15 A mountain of God is the mountain of Bashan; A mountain of many peaks is the mountain of Bashan.
16a Why do you look askance, you mountains of many peaks? {n}
16b Ar the mountain which God desires to dwell in? Yes, the Lord will dwell in it forever.
17 The chariots of God are myriads Even thousands upon thousands; The Lord is among them, as in Sinai, in holiness.
18a You have ascended on high, You have led captivity captive; You have received gifts among men, {n}
18b Even from the rebellious, That the Lord God might dwell there.
19 Blessed be the Lord, Who daily bears our burden, even God who is our salvation! Selah
20 Our God is the God of deliverances; And to GOD the Lord belong escapes from death.
21 But God will wound the head of His enemies, The hairy scalp of the one who still goes on in his trespasses.
22 The Lord said, “I will bring back from Bashan, I will bring them back from the depths of the sea,
23 That your foot may wade through blood, And the tongues of your dogs may have their portion from your enemies.”
24 They have seen Your procession, O God, The procession of my God, my King, in holiness.
25 The singers go before, the players on instruments follow after; in the midst of the maidens playing timbrels.
26 Bless God in full assemblies, Even the Lord, you who are from the fountain of Israel.
27 There is Benjamin, the youngest. ruling them; The princes of Judah their council, The princes of Zebulun and the princes of Naphtali.
28 Your God has commanded your strength; Strengthen, O God, what You have wrought for us.
29 Out of Your temple at Jerusalem, From there Kings will bring presents to You.
30a Rebuke the wild beasts of the reeds, The herd of bulls with the calves of the peoples, every one submitting himself with pieces of silver. {n}
30b He has scattered the peoples who delight in war.
31 Nobles will come out of Egypt; Ethiopia will quickly stretch out her hands to God.
32 Sing to God, you kingdoms of the earth; Oh, sing praises to the Lord, Selah
33 To Him who rides on the heaven of heavens, which were of old! Indeed, He sends out His voice, a mighty voice.
34 Ascribe strength to God; His excellence is over Israel, And His strength is in the clouds.
35a Awesome is God out of your holy places. {n}
35b The God of Israel, He gives strength and power to the people. {n}
35c Blessed be God! {p}

I am not wise enough to see the chiastic structure formed by Psa 68. But meditating on these matching pairs was instructive to me this morning:

Sing to God, sing praises to His name; {n}
Extol Him who rides on the clouds, by His name YAH, and rejoice before Him. Psa 68:4

Sing to God, you kingdoms of the earth; Oh, sing praises to YHVH, Selah
To Him who rides on the heaven of heavens, which were of old! Indeed, He sends out His voice, a mighty voice. Psa 68:32-33