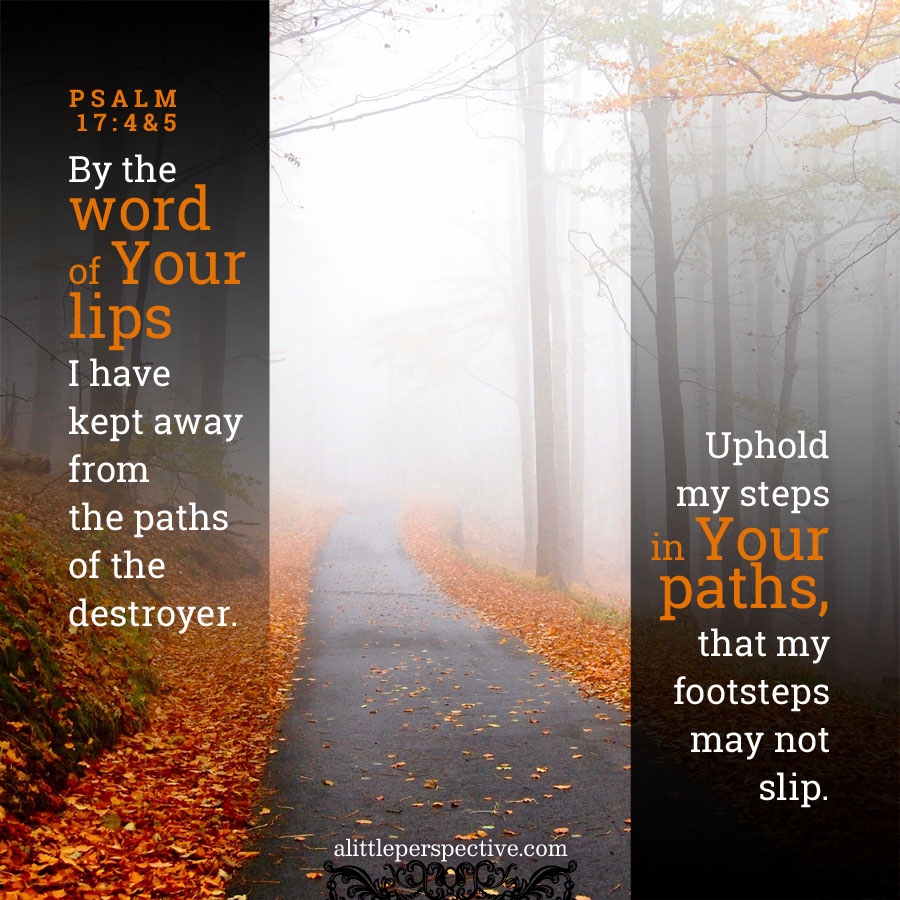 Concerning the works of men, By the word of Your lips, I have kept away from the paths of the destroyer. Uphold my steps in Your paths, That my footsteps may not slip. Psa 17:4-5

We learn that the paths of the Lord are the paths of righteousness, justice, mercy, and truth. To walk in that path, means to do those works, as well as believe and speak those words.

He leads me in the paths of righteousness For His name’s sake. Psa 23:3

So you may walk in the way of goodness, And keep to the paths of righteousness. Pro 2:20

I traverse the way of righteousness, In the midst of the paths of justice, Pro 8:20

All the paths of the Lord are mercy and truth, To such as keep His covenant and His testimonies. Psa 25:10

He has shown you, O man, what is good; And what does the Lord require of you But to do justly, To love mercy, And to walk humbly with your God? Mic 6:8

The way of wisdom is the way of the Lord’s paths, in which are found the blessings of life, honor, and prosperity:

I have taught you in the way of wisdom; I have led you in right paths. Pro 4:11

Happy is the man who finds wisdom, And the man who gains understanding; For her proceeds are better than the profits of silver, And her gain than fine gold. She is more precious than rubies, And all the things you may desire cannot compare with her. Length of days is in her right hand, In her left hand riches and honor. Her ways are ways of pleasantness, And all her paths are peace. Pro 3:13-17

You crown the year with Your goodness, And Your paths drip with abundance. Psa 65:11

The ungodly walk in the paths of the destroyer, which ends in death.

[Wisdom will] deliver you from the way of evil, From the man who speaks perverse things, From those who leave the paths of uprightness To walk in the ways of darkness; Who rejoice in doing evil, And delight in the perversity of the wicked; Whose ways are crooked, And who are devious in their paths; Pro 2:12-15

Their feet run to evil, And they make haste to shed innocent blood; Their thoughts are thoughts of iniquity; Wasting and destruction are in their paths. The way of peace they have not known, And there is no justice in their ways; They have made themselves crooked paths; Whoever takes that way shall not know peace. Isa 59:7-8

How do we know what the paths of the Lord are, to walk in them? The Scripture reveals it.

Many people shall come and say, “Come, and let us go up to the mountain of the Lord, To the house of the God of Jacob; He will teach us His ways, And we shall walk in His paths.” For out of Zion shall go forth the torah, And the word of the Lord from Jerusalem. Isa 2:3

“Torah” just means, teaching, instruction. God has given His torah to teach and instruct men in that way which is the Lord’s way; how to walk in His paths after Him. The torah furthermore reveals Jesus the Messiah and the way of salvation which is of faith through grace.

There is a reason the world is making the case today that men ought to reject walking in the Lord’s paths found in torah. However, as Isaiah revealed, in the end, many of the peoples, not just Jews, will come to the God of Abraham, Isaac, and Jacob, to learn His ways of mercy and truth, and to walk in His paths of righteousness and justice. Believers, we do not need to fear to stand on His truth or to obey His word. All His word, from Genesis to Revelation, is a pure word, the same yesterday, today, and forever, tried in a furnace of earth, purified seven times, which He watches over to preserve and perform.