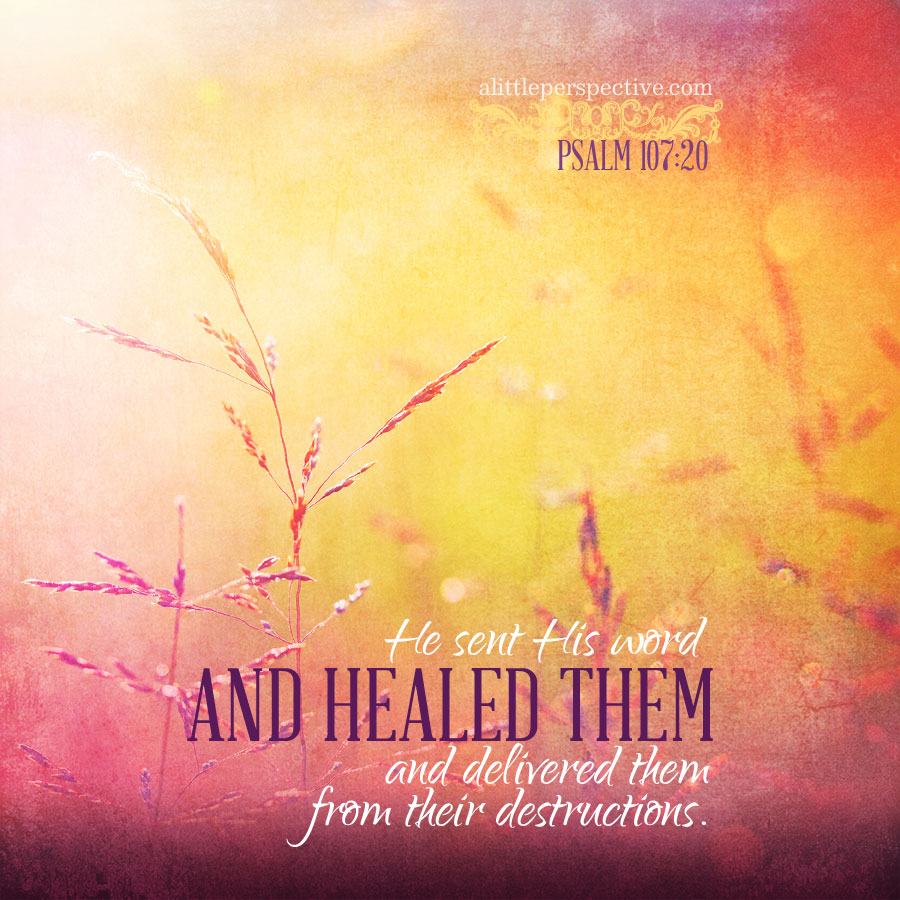 This psalm contains some interesting patterns. In the Hebrew, there are no mid- line breaks in this psalm, just the strong paragraph division at its conclusion.

1 Oh, give thanks to the Lord, for He is good! For His mercy endures forever;
2 Let the redeemed of the Lord say so, Whom He has redeemed from the hand of the enemy;
3 And gathered out of the lands, From the east and from the west, From the north and from the south;

4 They wandered in the wilderness in a desolate way; They found no city to dwell in;
5 Hungry and thirsty, Their soul fainted in them;

2) Psa 107:6, Then they cried out to the Lord in their trouble, And He delivered them out of their distresses;

3) Psa 107:7, His salvation: And He led them forth by the right way, That they might go to a city for a dwelling place;

8 Oh, that men would give thanks to the Lord for His goodness, And for His wonderful works to the children of men!
9 For He satisfies the longing soul, And fills the hungry soul with goodness.

10 Those who sat in darkness and in the shadow of death, Bound in affliction and irons;
11 Because they rebelled against the words of God, And despised the counsel of the Most High;
12 Therefore He brought down their heart with labor; They fell down, and there was none to help;

2) Psa 107:13, Then they cried out to the Lord in their trouble, And He saved them out of their distresses;

3) Psa 107:14, His salvation: He brought them out of darkness and the shadow of death, And broke their chains in pieces;

15 Oh, that men would give thanks to the Lord for His goodness, And for His wonderful works to the children of men!
16 For He has broken the gates of bronze, And cut the bars of iron in two.

2) Psa 107:19, Then they cried out to the Lord in their trouble, And He saved them out of their distresses;

3) Psa 107:20, His salvation: He sent His word and healed them, And delivered them from their destructions;

21 Oh, that men would give thanks to the Lord for His goodness, And for His wonderful works to the children of men!
22 Let them sacrifice the sacrifices of thanksgiving, And declare His works with rejoicing;

23 Those who go down to the sea in ships, Who do business on great waters;
24 They see the works of the Lord, And His wonders in the deep;
25 For He commands and raises the stormy wind, Which lifts up the waves of the sea;
26 They mount up to the heavens, They go down again to the depths; Their soul melts because of trouble;
27 They reel to and fro, and stagger like a drunken man, And are at their wits’ end;

2) Psa 107:28, Then they cry out to the Lord in their trouble, And He brings them out of their distresses;

29 He calms the storm, So that its waves are still;
30 Then they are glad because they are quiet; So He guides them to their desired haven;

31 Oh, that men would give thanks to the Lord for His goodness, And for His wonderful works to the children of men!
32 Let them exalt Him also in the assembly of the people, And praise Him in the company of the elders.

33 He turns rivers into a wilderness, And the water springs into dry ground;
34 A fruitful land into barrenness, For the wickedness of those who dwell in it;

35 He turns a wilderness into pools of water, And dry land into water springs;
36 There He makes the hungry dwell, That they may establish a city for a dwelling place;
37 And sow fields and plant vineyards, That they may yield a fruitful harvest;
38 He also blesses them, and they multiply greatly; And He does not let their cattle decrease;
39 When they are diminished and brought low Through oppression, affliction, and sorrow;
40 He pours contempt on princes, And causes them to wander in the wilderness where there is no way;
41 Yet He sets the poor on high, far from affliction, And makes their families like a flock.

4) Psa 107:42, The righteous do acknowledge the Lord for His deliverance : The righteous see it and rejoice, And all iniquity stops its mouth;

conclusion) Psa 107:43, Whoever is wise will observe these things, And they will understand the lovingkindness of the Lord. {p}

The thread runs through the psalm that in one way or another, man brings trouble upon himself, when he ignores the Lord and His wisdom, which He has given to the sons of men so that they might live a blessed life on this side of heaven (Deu 28). After all, the world that the Lord created for man was a perfect garden of no lack, no pain, and no death, dwelling with the Lord God Himself (Gen 1-2). But because man ignored the Lord and His wisdom, what we have now as a result, is lack, pain, and death (Gen 3). However, in spite of all that, God has poured out His mercy to man. He has revealed His ways to him in Torah, which will open the doors of blessing over his head instead of the doors of cursing, privation, and trouble. For example, in vs. 20, it is His word which He sent to heal their sickness. In His word, He commands eating clean foods, washing with water after touching certain things that make defiled, and so on, all of which have been confirmed by science only in modern times to prevent and limit the spread of disease. And then, even when our trouble is of our own making, when we cry out to the Lord in the midst of it, He delivers us.

The 1st and 5th troubles have interesting paired elements (I was not wise enough to map them properly yet) worthy of meditation. The hungry who are so because they lack a city to dwell in, appear in both vs. 4-5, and 36. The homeless wanderers wander in a desolate way in the wilderness in vs. 4, while in vs. 40, He makes the oppressive princes wander in the wilderness where they cannot find a way through. And His people need redeeming out of the land of the enemy, and gathering back to their own land (vs. 2-3) because they did not heed the word of the Lord but instead allowed wickedness to flourish in their midst (vs. 34).

Whoever is wise will consider these things!