You are here: Home / Perspective / america and nation / on the october surprise

Social media is buzzing with the big October Surprise the Washington Post just released to damage Donald Trump. This is a tried and true tactic of political operatives (leaving aside for now what business a supposedly neutral journal has in acting as a political operative) in the month leading up to the election, especially elections in which the support for one side far outweighs the support for the other side. Go back far enough into a candidate’s past, dig up dirt, and then spring it on the American public just enough in the advance of the election to depress voter turnout. Hey, if you can’t win on policy, then the only way to win is suppress votes (their side) or boost votes (your side).

They did this with great success when George W. Bush was running against Al Gore in 2000. The crowds for Bush were huge and enthusiastic all summer leading up to the election, and then in October the political operatives disguised as a neutral news outlet (Fox News in this case) released the story about W’s DUI when he was young and stupid. It almost worked too – voter turnout was suppressed enough that the election came down to whether chads were hanging or not in Florida.

Gosh, it wouldn’t even surprise me in the case of The Donald if the political operatives were from the RNC instead of the DNC. They have been wailing and gnashing their teeth for months that a complete outsider such as Trump garnered the delegates and left the political insiders – that is, RNC men – in the dust. They were quick to move against their own candidate (Broken link, active October 9, 2016) as soon as the news broke.

So, what is a believer to do in the face of the extreme vulgarity of the audio in question? This is the question the political operatives are hoping we will ask, but really, it is the wrong question. The fact of the matter is, everyone has a past. Everyone has said regrettable or foolish things when they were still, well, immature and foolish. Everyone has done stupid things in their youth.

If every sinner has a past of sin, then what question ought we be asking? I think it ought to be, Has the sinner repented and made a change? The biblical term for such repentance, is teshuvah. It is a Hebrew word from the root that simply means, to turn.

“When the heavens are shut up and there is no rain because they have sinned against You, when they pray toward this place and confess Your name, and turn from their sin because You afflict them, then hear in heaven, and forgive the sin of Your servants, Your people Israel, that You may teach them the good way in which they should walk; and send rain on Your land which You have given to Your people as an inheritance. 1 Kin 8:35-36

“Hear me, O Lord, hear me, that this people may know that You are the Lord God, and that You have turned their hearts back to You again.” 1 Kin 18:37

Now before him there was no king like him, who turned to the Lord with all his heart, with all his soul, and with all his might, according to all the Law of Moses; nor after him did any arise like him. 2 Kin 23:25

All the ends of the world shall remember and turn to the Lord, and all the families of the nations shall worship before You. Psa 22:27

Let Your hand be upon the man of Your right hand,
Upon the son of man whom You made strong for Yourself.
Then we will not turn back from You;
Revive us, and we will call upon Your name. Psa 80:17-18

Turn at my rebuke; surely I will pour out my spirit on you; I will make my words known to you. Pro 1:23

“The Redeemer will come to Zion, and to those who turn from transgression in Jacob,” says the Lord. Isa 59:20

‘Surely, after my turning, I repented; and after I was instructed, I struck myself on the thigh; I was ashamed, yes, even humiliated, because I bore the reproach of my youth.’ Jer 31:19

Let us search out and examine our ways, and turn back to the Lord; let us lift our hearts and hands to God in heaven. Lam 3:40-41

“Therefore I will judge you, O house of Israel, every one according to his ways,” says the Lord God. “Repent, and turn from all your transgressions, so that iniquity will not be your ruin. Cast away from you all the transgressions which you have committed, and get yourselves a new heart and a new spirit. For why should you die, O house of Israel? For I have no pleasure in the death of one who dies,” says the Lord God. “Therefore turn and live!” Eze 18:30-32

This is the language of teshuvah:

“I’ve said and done things I regret, and the words released today on this more than a decade-old video are one of them.”

“I’ve traveled the country talking about change for America. But my travels have also changed me.”

“I have gotten to know the great people of our country, and I’ve been humbled by the faith they’ve placed in me.”

“I pledge to be a better man tomorrow …”

“What difference, at this point, does it make?”

“Libya was a different kind of calculation and we didn’t lose a single person.”

“I don’t believe I knew anything about any of these real estate parcels and projects.”

Hilary Clinton’s public testimony at various times in her career.

I actually think this incident is a test for the body of Christ as much as it is a test of Mr. Trump’s present character. Will we humble ourselves and return to the Lord, in humility recognizing that a need for change exists, and make that turn as Mr. Trump has? Or will we self-righteously look down our nose at the sinner next to us, thanking God that we are not like him? This is the hour of your decision, America. 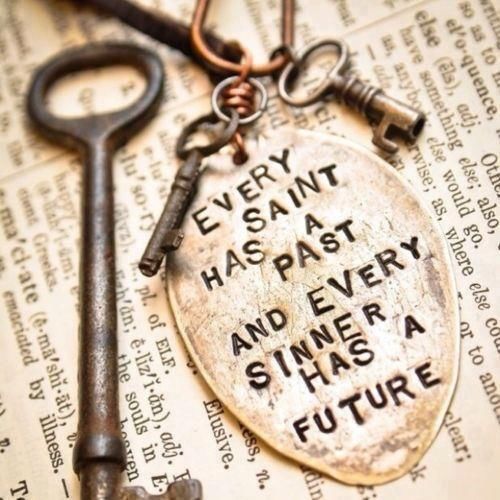 “Every saint has a past. Every sinner has a future.” – Oscar Wilde