You are here: Home / Perspective / family and society / on teenage rebellion, part three 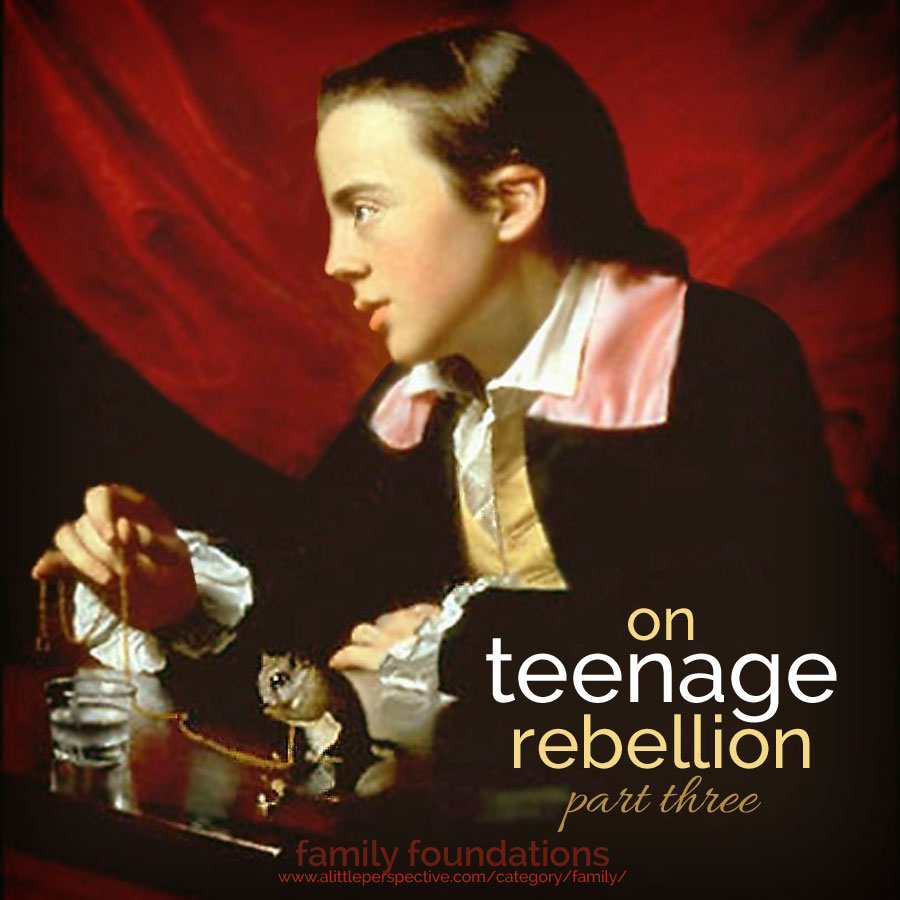 If teens are rebelling against parental authority, they rebelled against divine authority first. It is God who said, “Honor your father and mother.” Rebellion against God is not just a teen problem, but a human nature problem. Often at the root of rebellion, there is a deeply- held belief in the heart, which, it often turns out, the enemy nourishes and strengthens over the years with more lies. The lie at the root of rebellion is that man is independent and can make his own decisions; he is not accountable to God, and God is not (or does not have the right to be) King over his life.

This lie, modern American society and culture feeds into the general population. We Americans value our independence! And often in movies or television, the underdog who overthrows imposed authority is a common and popular plot theme, and the independent rebel or the smart mouth is the hero.

There is a difference, however, between overthrowing usurped, tyrannical, and unrighteous authority (which is a good thing, such as defeating the Nazis in World War II) and overthrowing God’s right to be King over mankind (which is a bad thing) – a difference which modern culture does not make.

A child fed a steady diet of the Word of God from the earliest age, both Old and New Testaments, will understand the distinction, and will recognize God’s right to rule as King over mankind. The lie at the root of most rebellion will have difficulty taking root in his heart.

A child not fed a steady diet of God’s Word is not without hope, however – God’s Word is a sword of truth which will bring down strongholds of lies established in our hearts. Begin a steady diet of the Word of God, especially Torah, Psalms, and Proverbs; especially Isaiah and Jeremiah, and I think Job would also be great. The New Testament of course would also be good, but sometimes people ignore the Old and go straight for the New. In this case, it is detrimental for the Old to be ignored (and I think, in every case). The Old specifically lays a foundation of God as our Creator, Lawgiver, and Judge. One of the fruits of meditation in it, is the fear of the Lord, a good thing – the beginning of wisdom. 🙂

Corollary lies which may accompany the man is independent lie, are God is not my Creator – especially fostered by evolutionary doctrine taught in our schools and universities, and preached in the media. Another related to it, is that the Word of God is flawed or not authoritative. Both are lies, and both serve to feed the man is independent lie, and to encourage rebellion against God.

The influence of any lie can be destroyed by the Word of God, even if the person does not believe what the Word is saying is true, at first. Faith comes by hearing, and hearing by the Word of God. The truth from the Word which is opposite the lie needs to be said aloud so that the ears can hear it, over and over again, for faith (belief) in that truth to be produced in the heart. It would be helpful if the lies could be blocked at the same time. No popular culture for a while. And there is more that can cause rebellion …